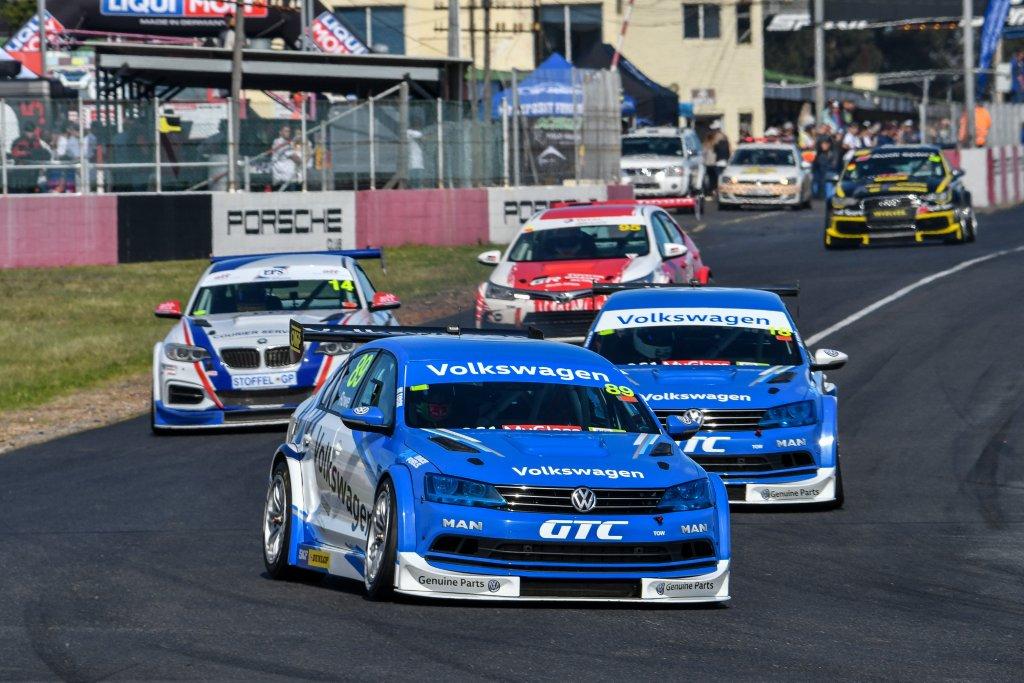 Brian Joss – It was a strong weekend that could have yielded better results for the Volkswagen Motorsport outfit as both their Jettas and Golf GTi’s are the cars to beat in the country’s premier Global Touring Car series.

After an eventful weekend at Killarney in the Mother City, the team leaves Cape Town still firmly in control of the manufacturers’ points standings after claiming race wins in both the GTC and GTC2 categories.

From the first few laps of Friday’s practice sessions, it was clear that both Daniel Rowe and Keagan Masters were going to be competitive in Cape Town. The team came to Killarney with one clear objective and that was to ensure both drivers climb to the top of the drivers’ standings while also maintaining their overall grip at the top of the manufacturers’ standings.

The strategy nearly paid off as the names of both GTC drivers occupied positions near the top of the timesheets during the early Saturday morning qualifying session, but when the flag was waved, Rowe had to settle for second position closely followed by his teammate Masters.

When the lights turned green to signal the start of the first race, Rowe quickly settled into his position behind the bumper of rival Robert Wolk, waiting for an opportunity to safely pass the BMW. Two laps into the race that opportunity arrived when the Jetta managed to power its way past the BMW on the main straight and into the lead. From there on in Rowe drove a consistent race to manage his lead until the chequered flag brought the 12 lap race to an end. Rowe’s teammate though was not so lucky. Immediately after the start Keagan Masters realised that his Jetta was lacking power due to boost issues. He slowly circulated around the track in order to record a finish that allowed him to start race two from pole position as per the series’ reverse grid starting order.

Behind the fight for overall GTC honours, it was business as usual for Volkswagen’s Bradley Liebenberg who recorded his third straight pole position in as many events. The youngster went on to convert it into a comfortable victory in race one with teammate Adrian Wood crossing the line to claim second place for Volkswagen, ensuring that the domination of the Golf GTi continued in the GTC2 category.

Race two was an eventful one for almost the entire team. This time it was Daniel Rowe whose Jetta suffered from a misfire shortly after the start, preventing him to race for a victory as he did in race one. And unfortunately for Brad Liebenberg, his perfect run was halted following a first corner incident that also claimed his teammate Adrian Wood. No less than four competitors occupied the same piece of tarmac going into turn one.

Contact was inevitable and this time Liebenberg and Wood fell victim to the racing incident. This left the team’s hopes on the young shoulders of Keagan Masters who was fighting with the Audi of Simon Moss at the head of the field. Masters came to within a second of claiming his first overall victory in GTC, but in the end he had to settle for a very credible second.

“Both Daniel and I had a very strong weekend here in Cape Town. It’s a real pity that we both had small issues in each race that prevented us from overall victory on the day,” said Masters after the race. Teammate Rowe agreed, “We showed that the Jetta is now definitely the car to beat. The team has worked really hard to get it to this point and the hard work is paying off. In racing you always hope for the best results possible but we are happy with a first and a second place in Cape Town.”

And although Liebenberg missed out on making it six race victories from six starts, the GTC2 driver is still very much in command of the championship fight. “It’s a pity that race two ended the way it did, but that’s racing and incidents happen. We also don’t have to win every race to win the championship so we are still very much on track to achieve our objectives,” said the GTC2 points leader.

Head of Volkswagen Motorsport, Mike Rowe was very satisfied with his team’s performance. “Everyone in the team including all the technicians and race drivers showed their mettle this weekend. As a result we got some victories and valuable championship points, and we still top the standings for manufacturers. Now we cant wait to get to Port Elizabeth to get Daniel and Keagan to the top of the Drivers standings too. Our team, car and drivers certainly deserve it,” he concluded.

The GTC series will now move to Port Elizabeth for Round 4 which is scheduled to take place on 15 June.