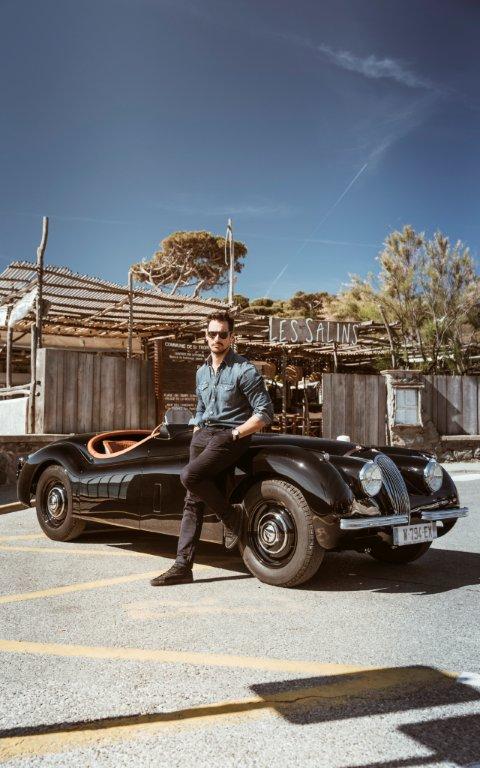 Brian Joss – David Gandy has fulfilled a life-long ambition by completing the restoration of a 65-year-old original Jaguar XK120.

The British model unveiled his bespoke classic vehicle in Saint Tropez on last week, after the car underwent 2 700 hours of restoration by the Jaguar Classic team.

The original car – which was discovered under a bush in California, USA – was registered in 1954 as a standard left-hand drive model but was brought to the UK to be restored to David’s specification by the team at Jaguar Classic in Warwickshire, UK.

Taking inspiration from the original XK120 Lightweight model, Gandy’s ambition for the vehicle was to recondition the iconic Jaguar with modern upgrades to make it “ready to race” in popular classic car events.

Gandy, said: “Having driven a Jaguar XK120 at Mille Miglia in 2013 and 2014, I knew that I wanted to own one of these incredibly special cars. Completing the restoration has been an extraordinary experience and now being out here and finally seeing it complete against the backdrop of St Tropez is pretty amazing.”

Every step of the design and restoration, for both the exterior and interior of the vehicle was created in collaboration between Gandy and the Jaguar Classic team.

Using influences from his successful career in fashion – working with some of the most prominent creatives and brands in the world – he and the Jaguar Classic team worked closely to meticulously rebuild every component including an upgraded engine, braking system, and give the vehicle a striking black exterior finish made up of 13 litres and four coats of paint.

“We’ve taken inspiration from the most successful XK120s in Jaguar’s history and combined its historical features with some modern-day design elements.

It’s been a passion project and a real labour of love, working with the Jaguar Classic team,” said Gandy.

Finished with an Aged Saddle tan leather interior, some other personalised modifications include a smaller 15-inch steering wheel and a made-to-measure front seat with a bespoke lattice design to enhance comfort for 1.88m tall David.

Calum McKechnie, Head of Jaguar Classic, said: “This unique XK120 showcases the expertise, skill and craftmanship that Jaguar Classic makes available for all of its customers. Not only were we able to bring this iconic sports car back to life mechanically, but the attention to detail and the bespoke design of the interior sets David’s car apart.”