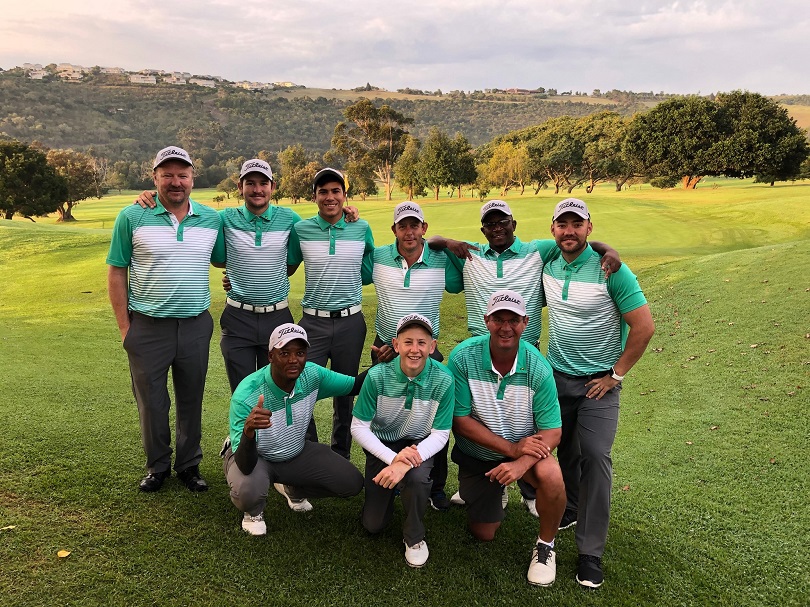 PLETTENBERG BAY, 14 May 2019 – North West kept their title defence on track in the SA Country Districts, but KwaZulu-Natal could pose a serious threat after a thundering second round win at Plettenberg Bay Golf Club on Tuesday.

Meanwhile Southern Cape swept to victory in their opening salvo in the B-Section as Boland took the lead in the promotion battle on Tuesday.

Buoyed by an 8 – 4 win against Limpopo on day one, North West routed Northern Cape in the second round. The defending champions won three of their foursomes and halved the last game take a 3 point cushion into the afternoon session.

North West will have a bye on Wednesday, but the side will keep an eye on KwaZulu-Natal, who mowed down Limpopo 9.5 – 2.5 to catapult to the top spot in the log.

The 2017 champions scored a clean sweep in the foursomes, and carried the momentum into the singles. Koenie Erasmus, Phillip Barnes, Thomas Lovett and Jens Hillerman – playing at six, five, four and two respectively – stacked up 4 points, and Sean Baker made it 9 points when he edged out Tyron Luck with a par at the final hole to win 1-up.

Number one Jason Gulliver was in the driver’s seat against Adam Milanzi, but he lost 16 with a bogey and 17 with a double bogey. Gulliver rallied with a par at 18 to halve the game.

The log leaders will be looking to extend their lead against Northern Cape in round three, while Free State will hope to bounce back from the first round loss with a positive result against Limpopo.

Southern Cape gave the home crowd plenty to cheer about with an 8.5 – 3.5 win against Mpumalanga on day two.

The host union drew 2-all in the foursomes, but stepped it up in the singles. Ian Norgarb set the tone when he knocked out Anton Steenkamp 4 & 2, and Marlo Pienaar beat Darren Neyt 3 & 2 to put the Garden Route side ahead.

The positive result moved Southern Cape to third in the log.

Mpumalanga held on to second spot with 13 game points, while Boland’s crushing 10 – 2 victory over Border catapulted the side to the top of the pile with 4 points and 18 game points.

Boland lost one game and halved another in the foursomes, but the side shifted into high gear in the afternoon session.

The log leaders go head-to-head with Southern Cape on Wednesday, Border play Eastern Province and Mpumalanga has a third round bye.