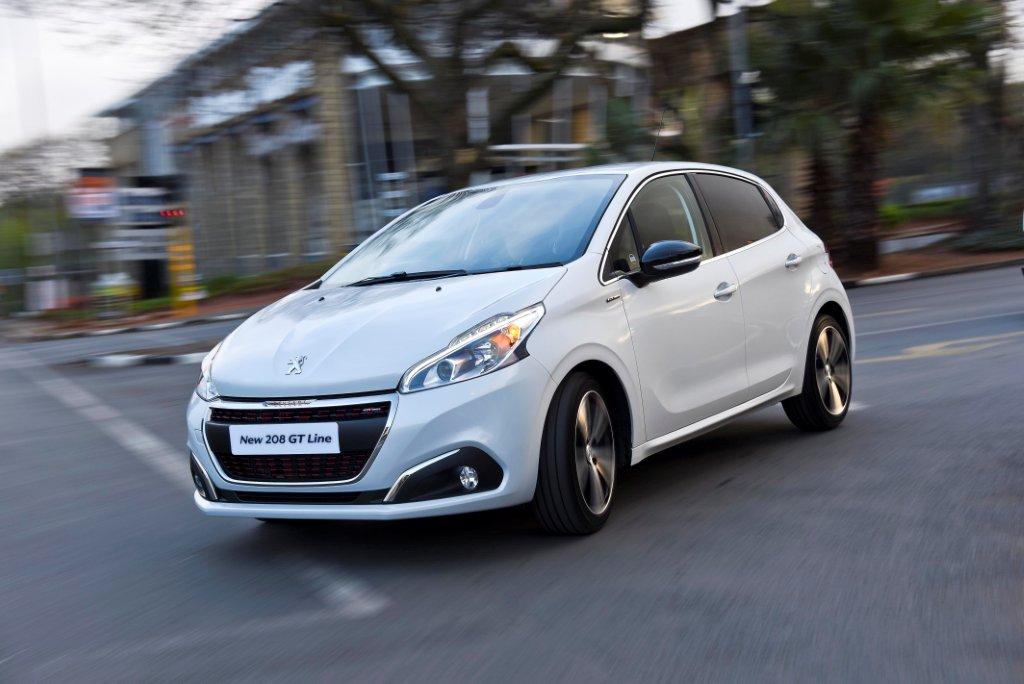 The flagship of the Peugeot range, the 208 GT Line had a major revamp last year, done with typical French flair,  with the emphasis on quality.

What didn’t change though was the car-maker’s much vaunted 1.2 litre PureTech engine which packs quite a punch. Most of the tweaks were sporty in nature: special GT Line sports seats, a multifunction steering wheel with a full leather rim. New headlights with black and chrome elements, LED daytime running lights, repositioned foglamps help to stress the dynamic character of the hatch.  The GT Line model features the special Equaliser grille that includes red detailing, a gloss black finish on the grille surrounds and fog lamp finishers and exterior mirror housings. Aluminium door sill finishes and pedals add another sporting touch.

The i-Cockpit concept, which arranges instruments in the driver’s line of sight, and provides access and fingertip control of all the car’s settings and which has become a Peugeot feature has been retained. However, the 7-inch infotainment touchscreen is beginning to show its age, even though it offers MirrorLink and it’s not hard to connect a smartphone or other devices through the USB.  The 208 GT Line  features “mood” lighting and white backlighting which highlights the instruments and controls.

Peugeot’s PureTech won the international engine of the year award in 2015, 2016, 2017 and 2018, in the 1 litre to 1.4 litre category.  The three cylinder turbo-charged engine  offers the same performance as a 1.6 motor and, the French manufacturer says, uses significantly less fuel.  Other benefits include better acceleration and reduced C02 emissions.  According to Peugeot engineers three cylinders are better than four because there is one less cylinder of fuel to burn, and a lighter weight which means you use less petrol to move the vehicle.

I enjoyed driving the five-speed manual, even in heavy traffic.  In my view performance is better than average and even in the grind of the daily traffic, the manual GT Line the trips proved to be less stressful.

But it’s on the open road where the perky and peppy GT Line perks up,  a lot.  On a trip to  Saldanha Bay where the road is long with unexpected rises and sweeping curves the Peugeot 208 GT Line stuck to the tarmac like Velcro and there was no body roll to speak of. It sailed over all the road imperfections without a squeak, testifying to its build quality.

Although when you put foot there is some initial turbo lag and overtaking is a breeze. The changes through the five-speed gearbox were slick and precise but there were occasions where I thought a sixth gear would have been a bonus. You also get used to the smaller-than-usual steering wheel which adds to the sporty image of the 208.  Although I don’t particularly like the aluminium pedals, they become slippery when wet, they do add a touch of class to the GT Line in keeping with the hatch’s racy image.  The racing-type seats are comfortable and offer plenty of support. The ride is firm and is sure-footed around corners.

Peugeot’s claimed fuel consumption of 5.7 litres/100km is probably achievable in a perfect world, but in the hustle and bustle of the daily grind I couldn’t do better than 7 litres (and a bit)/100km, and the test route included all sorts of conditions: motorway driving; city traffic, twisty mountain passes and the wide open roads where the Peugeot 208 GT Line was quite at home at the legal limit with plenty of horses in reserve.

There is adequate space for two adult passengers at the back with enough head and leg-and-head room, if the front seats are pushed forward, a little.  The 208 GT Line has a 311 litre capacity  boot and with the usual 60/40 back seat split it expands to 1 152 litres, Peugeot said. The ubiquitous cup holders, two,  are available at the front and in all the door mouldings.

Peugeot hasn’t forgotten safety. The comprehensive list of passive and active systems include  ABS anti-lock brakes with electronic brake force distribution (EBD) and emergency brake assist (EBA). There are dual front and curtain airbags, too. Hazard lights active automatically under emergency braking, and there are electric child locks on the rear doors as standard.

Summing up: the Peugeot 208 GT Line 1.2 PureTech five speed manual is fun. It’s practical, and with its peppy performance and excellent handling it ticks all the right boxes. Even though a new GT Line 208 is planned for 2019 which will use the Common Modular Platform (CMP) instead of the PF1 (subcompact platform), and  is expected to be bigger and better, the 2018  208 GT Line is worth a second look. Your dealer may even offer specials.