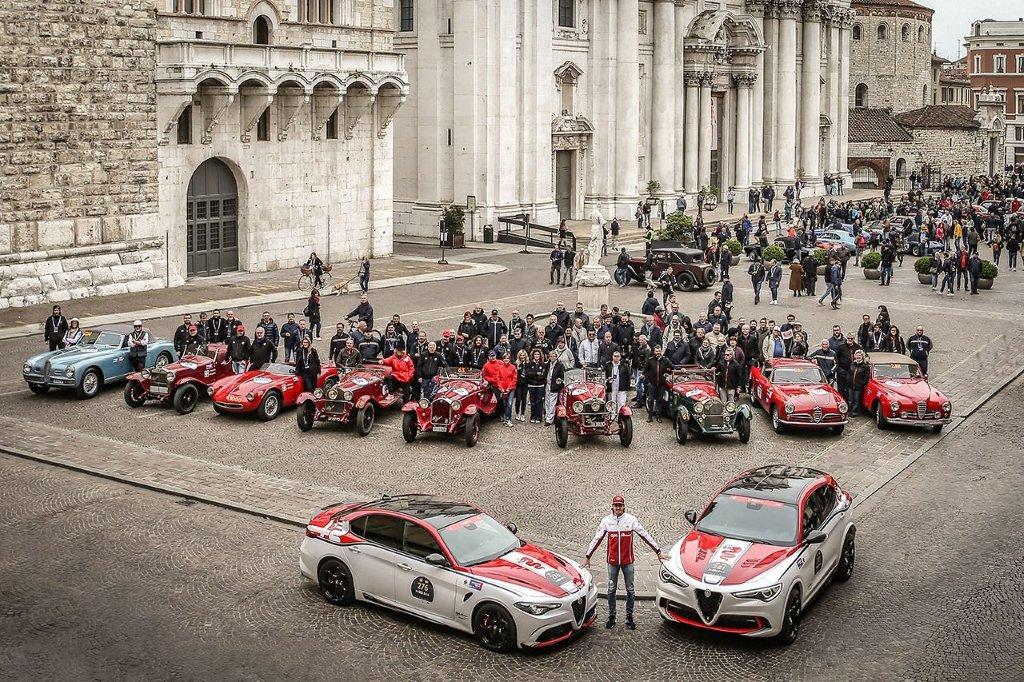 Brian Joss – Alfistis were at fever pitch as the 1000 Miglia got underway this week.

The 1000 Miglia has been the manifestation of the universal appeal of motorsports for more than ninety years, and it was in this race that Alfa Romeo wrote legendary pages in its history, with unforgettable victories and records that can now never be bettered. In fact, the brand tops the table with 11 wins, 7 of them consecutive, from 1932 to 1938, with all the most important models leaving their mark on this classic event based in Brescia.

This year Alfa Romeo, Automotive Global Partner and the constructor with the largest number of cars taking part, is in Brescia with magnificent cars from the Museo Storico Alfa Romeo. Also present is the peak of current output, providing an authentic showcase for the brand’s excellence, in the form of the Giulia and Stelvio Quadrifoglio “Alfa Romeo Racing” limited edition special series, making their very first on-road appearance, and the official convoy cars.

There was eager applause from the crowds for the 1928 Alfa Romeo 6C 1500 SS, bearing number 59, driven by Giovanni Moceri with navigator Daniele Bonetti:

this experienced pairing are aiming to build on their second place in 2018, just eight penalty points behind the Alfa Romeo 6C 1500 GS Testa Fissa which won last year’s re-enactment. The trio of official cars is completed by the Alfa Romeo 1900 Super Sprint, number 237, carrying Prisca Taruffi and Savina Confaloni, also in competition for the coveted Ladies’ Cup.

The cars have now become a throbbing, magnetic roar, heading South East to Desenzano and to be heard all along the race route to Milano Marittima, but they were already delighting participants and spectators. The technical inspections at the fairgrounds were the usually fraternal gathering point for teams from all over the world, immediately transformed in Brescia into a body of old friends, ready to look back together over the events of past editions before appearing before the crowds at the sealing in Piazza della Vittoria this morning. The process involves two stages, one for the crews – permits, certificates and driving licences – and one which checks the car’s technical features. It involves the application of a lead seal to confirm that the inspection has been passed and that the car is as specified in the race documents and, above all, it constitutes final approval to take part in the event. However, sealing is first and foremost one of the times when fans enjoy a close look at the historic cars taking part in the race.

It is also an opportunity to experience the unique allure of Alfa Romeo, which exerts the same appeal with both its historic cars and the modern models in the official convoy. Fans were delighted to welcome Antonio Giovinazzi, and the Italian driver from the “Alfa Romeo Racing” team also set off with the race on board the “Alfa Romeo Racing” limited edition special series Alfa Romeo Giulia. The limited edition embraces both Giulia and Stelvio Quadrifoglio and celebrates Alfa Romeo’s ever-deepening participation and involvement in the Formula 1 world championship, in partnership with Sauber.