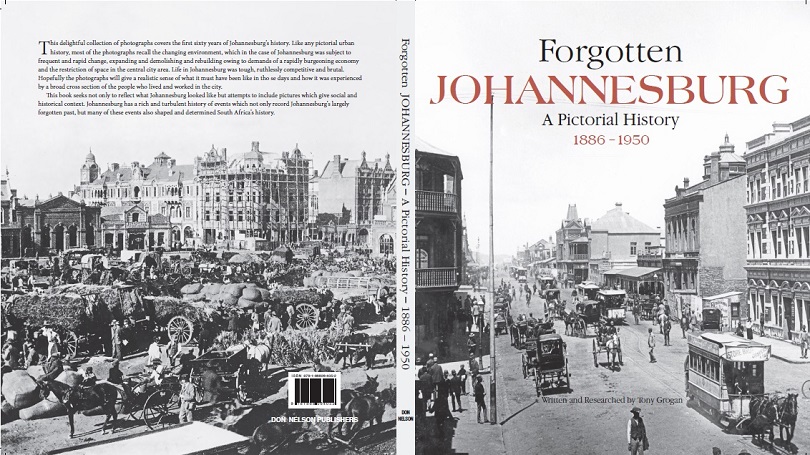 Tony Grogan is one of South Africa’s pre-eminent editorial cartoonists, an artist and researcher of note and he has written seven books, including Forgotten Cape Town.

In Forgotten Johannesburg he traces the history of the bustling metropolis that started life as a rambunctious mining town in 1886 and is now the beating  heart of the South African economy. The images are from various archives and some people will recognise the landmarks. Grogan wrote the words and did the research. The book is divided into different categories that recall the changing environment and some of the characters that helped to make Johannesburg.

The Langham Hotel was a landmark in the city for many years and residents went there to enjoy a drink or two. In those days women weren’t allowed in bars, cocktail or otherwise, but their husbands or boyfriends often treated them to a lavish dinner in the restaurant where they were allowed.

There is an image of a mud and brick house which became the premises of the first branch of Standard Bank in South Africa.  Other photographs show how Johannesburg started as a tent town to pictures showing panoramic views of the suburbs, with its wide open spaces. Today, you’ll be lucky to find a blade of grass growing between the concrete monstrosities and the gigantic shopping malls. One section is devoted to mining and the images show just how hard life was and you can also see the slums of the city. The prominent personalities of the day include Paul Kruger, Cecil John Rhodes, Barney Barnato, Carl van Brandis and Mahatma Ghandi, to name a few and with each portrait is a pen picture. Nostalgia buffs will enjoy looking at the pictures of the entertainers who visited Johannesburg, including Pagel’s Circus which featured Pagel himself, a man known for his prodigious strength. Johannesburg only acquired city status in September 1928, even though in the 1880s it was recognised as South Africa’s most important centre. One picture shows thousands of people crowding into Rissik Street to watch the signing of the proclamation on the steps of the City Hall. There is also an image of one of South Africa’s most famous statesman, Jan Smuts, cutting his 70th birthday cake.

Other pictures record long-forgotten incidents like the Great Dynamite Explosion in 1889. Eight people were killed when a string of railway trucks containing dynamite was left cooking in the blazing sun near the New Braamfontein Station. The explosion, which, according to reports of the day, could be heard as far as Klerksdorp, left a crater 250 metres wide, 30 metres deep and 60 metres wide. The Jameson Raid, a plague of locusts and the Rinderpest which killed 4.5 million cattle, also happened in 1889. So all in all not a good year for the country.

Grogan has done history buffs a service with the publication of Forgotten Johannesburg. You’ll enjoy paging through it to see how much life has changed since those early days. It’s worth a place on your bookshelf. Sadly there are no Grogan sketches which would have added even more value to the book.