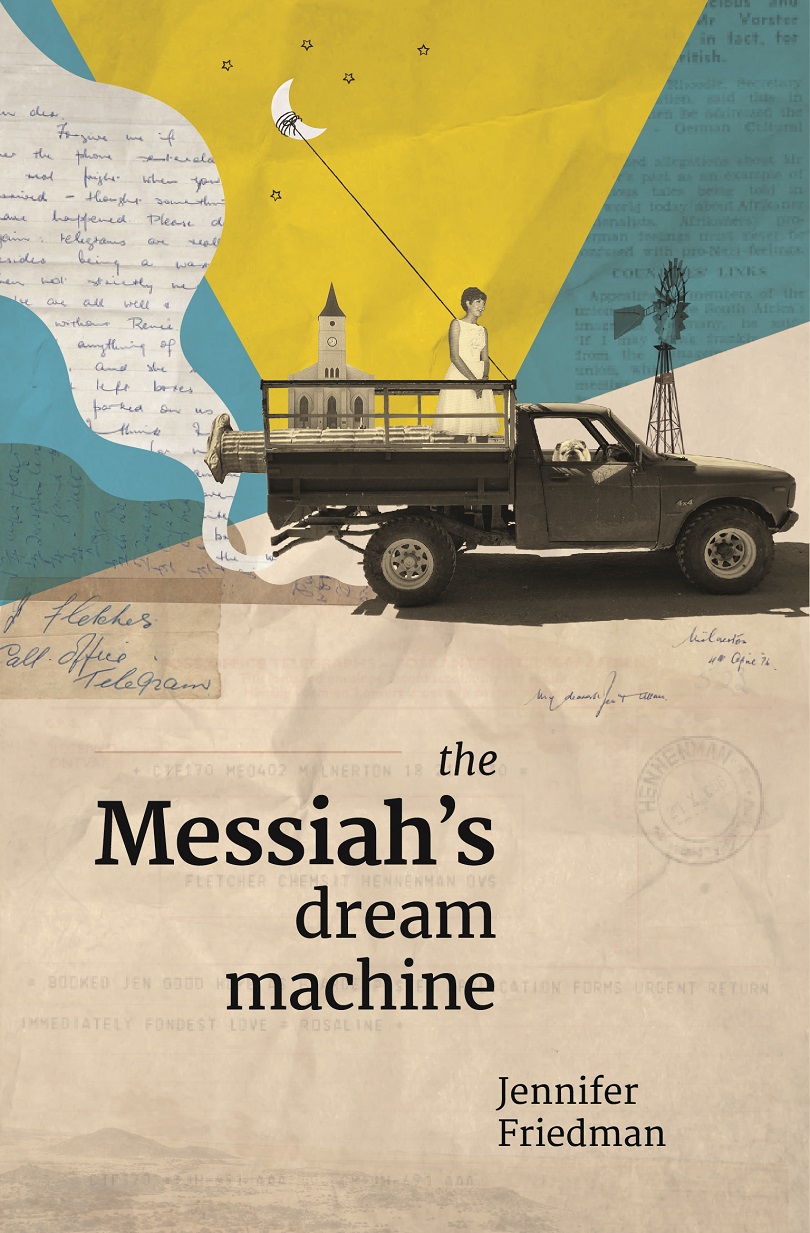 The Messiah’s Dream Machine picks up where the Queen of the Free State (The Gremlin, March 4, 2017) ends and the young Jennifer Friedman is being sent to boarding school in Cape Town, despite a promise her mother made to her, “I’ll never send you away to a boarding school. Never.”

The young Friedman lived in Philippolis in the Orange Free State not far from the family farms, Boesmansfontein and Avondsrus, and though her childhood was a relatively happy one, being Jewish she always felt like an outsider, especially at school and in the community, as she recounts in her memoir. Her pharmacist father was a bully and her mother, a disciplinarian. The writing in Queen of the Free State is as lyrical as it is in The Messiah’s Dream Machine. Friedman also writes Afrikaans poetry and as far as is known she is the only Jewish woman currently doing this. The other female Jewish Afrikaans poet was the late Olga Kirsch.

While the “Queen” was written in sequence, the Messiah’s Dream Machine is in seven parts with 22 chapters. It doesn’t have a timeline and is disjointed, mainly because it goes back and forth between Johannesburg, Israel and Australia, interspersed with return visits to the farms where she reconnects with her cousins Wilfred and Benjamin, and her Uncle Leslie.

Every Jewish family has a messiah, one who knows everything and this burden falls on Wilfred. “Ask Wilfred, he’ll know”. And the Dream Machine? You will have to read the book to find out what it is.

The Messiah’s Dream Machine is an entertaining memoir of one woman’s journey into adulthood and her reflections are full of pathos and bathos, a lot of humour and some heart-breaking moments. Especially when Friedman writes about the death of her husband, Allan Hendler, from cancer, while they were living in Sydney.

Her tentative steps towards growing up start when she is sent to a boarding school in Cape Town. But not before saying goodbye to Sandy-my- dog and to Izak and Marta who call her Mpho – “Gift from God”. But boarding school is not all jolly hockey sticks. It’s a gruelling and spartan place and the young Friedman finds it hard to fit in and still feels like an outsider. She writes: “…Some make new friends, while others stay lonely and alone. Some girls  –  like me – drift through the days detached and disconnected, while others, clustered happily together in this overheated, seething sisterhood, blossom and thrive.”

Friedman details her experiences in Johannesburg and getting married in Cape Town, moving to Israel where Allan, a chemical engineer, is in charge of setting up a factory to make Hendler products, the conundrum of emigration and life in Sydney, Australia, where a cyclone roars through the garden of  their newly acquired house. Every home needs a dog and that’s when Zelig, a Jewish British bulldog, comes into their lives. But it doesn’t end well, either for Zelig or the Freidmans.

In Israel she is pregnant and records her experiences with a certifiable home-help who reveals a secret that almost tears her marriage apart.

Happy times are spent on her trips home to the Free State where she swaps tales with her cousin Benjamin, and the messiah, her other cousin – Wilfred –the owner of the Dream Machine. Then of course, there’s Uncle Jukie, the “bearer of bad tidings”, not forgetting Uncle Leslie who has to approve of Allan before he’ll allow his niece to marry him.  You’ll laugh out loud when you read about the “resurrection” of Uncle John and how Benjamin had to help his dad, Leslie, bury their youngest grandpa at age 94. Nobody really knew how to officiate at a Jewish funeral and the rabbi refused to come because Uncle John’s wife, Freda, wasn’t Jewish.  So Avbob transported the body through a raging storm and Uncle Jukie did the honours. Grandpa MJ is 98 and is in Sea Point because it was more convenient for the family,  after Granny died suddenly in the village after 60 years of marriage.

On one visit to Avondson Friedman has to put up with a plague of mice that is chewing its way through the district and she barricades her bedroom with telephone directories, even though the rodents have almost demolished the wooden floors.

Nothing much has changed in the village where Uncle John and Grandpa MJ lived. One day shortly after Hendrik Verwoerd was assassinated a VIP was about to visit: that visitor turned out to be Prime Minister John Vorster and one of his guards at Koffiefontein where he was interned for his Ossewabrandwag activities was Uncle John and Grandpa MJ warned him to be on his best behaviour, in case Vorster recognised him.

One of the highlights of Friedman’s life was when Allan gave her a gift a few months before he died. He tells her, “I know how much flying’s meant to you… the time’s right, you need to fly.” Friedman bought her own Grumman Tiger plane in 1997 after she earned her pilot’s licence in Australia, a few years earlier. She flies to small outback towns, sometimes just for a lunch date, said her publisher.

The Dream Machine takes Jenny and Wilfred to his favourite place, an olive tree behind the berg, and from the top they can see far below them Avondson and Groenvlei – the promised land –  Seebos  and Wolwekop where Sir Laurens van der Post was born.

Friedman has an eye for detail as well as a prodigious memory.  Her passion and love for the Free State and the people she surrounds herself with shine through on every page.

Friedman’s writing has echoes of Herman Charles Bosman’s Oom Schalk Lourens, whose hunting ground was the Groot Marico. However, her language is more nuanced and lyrical. She captures perfectly the flavour of the Free State where the stars are brighter, the air colder, the dust dustier, the green greener and “the quiet, how it hums and patters, whispers and chews at the fabric of the night.”