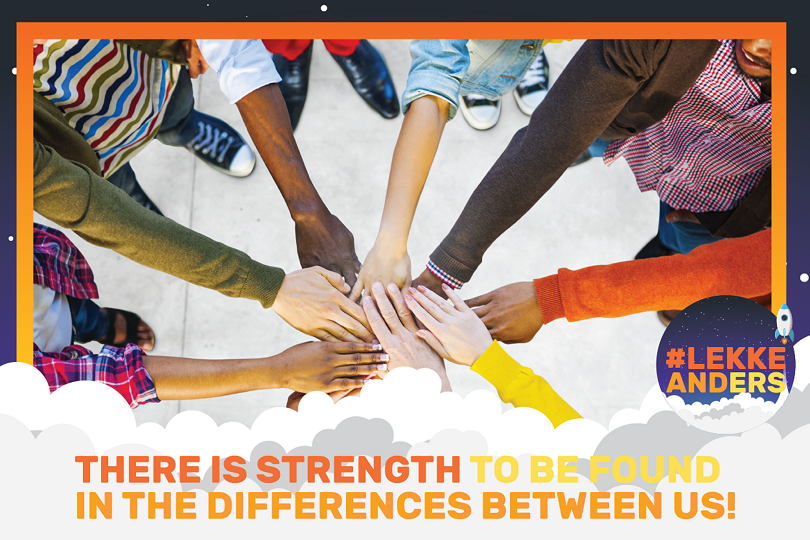 Imagine a world where diversity among humans is not only accepted, but also celebrated. In this world, people realise there is strength to be found in the differences between them. They know that they would never have been able to flourish if they didn’t embrace these differences – making it work for them instead of against them.

Close your eyes for a moment. Visualise.

Does this sound like some kind of advanced civilisation to you? Maybe, but it doesn’t have to. We are truly a diverse nation and South Africans are ready to embrace diversity and each other.

The LekkeDifferent campaign has been set up with the main goal of getting South Africans, especially school learners, to start embracing their unique characteristics and celebrating diversity. If you want to bring about positive change, start with the youth. After all, they are the future.

The Federation of Governing Bodies of South African Schools (FEDSAS) launched the LekkeDifferent social media campaign where learners are motivated to celebrate their uniqueness and diversity by sharing their stories about what makes them unique, on social media.

“Let’s celebrate diversity in our schools this year. Instead of focusing on racism and all the negativity, let’s rather celebrate the wonderful country and diverse people we have. Let’s focus on the positive aspects of being different,” says Jaco Deacon, deputy CEO at FEDSAS.

If you would like to become a part of the #LekkeDifferent campaign, post a photo or video on your Instagram or Facebook page and tell your story on how unique you are, but that you also have best friends who are different. Remember to use the hashtags #LekkeAnders or #LekkeDifferent and also tag FEDSAS and LekkeDifferent in your posts.