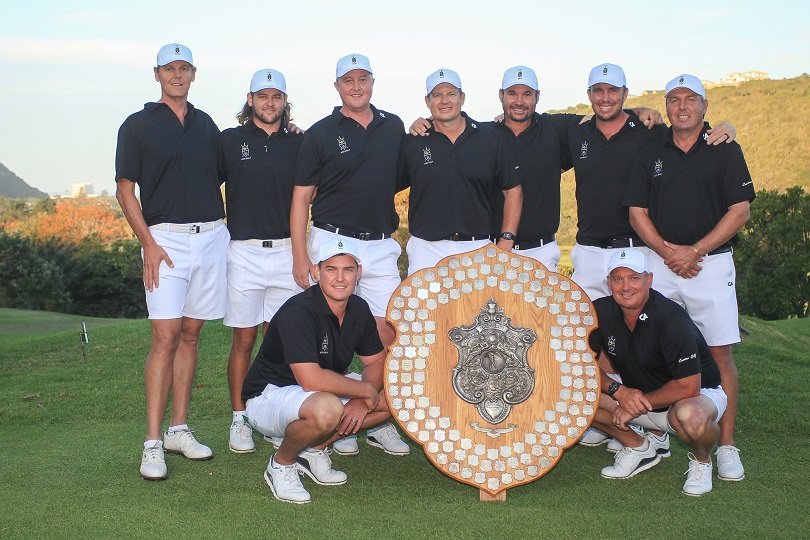 PLETTENBERG BAY, 17 May 2019 – KwaZulu-Natal came up trumps in a humdinger final round clash against North West to lift the A-Section title in the 2019 SA Country Districts on Friday, while Boland finished at the top of the pile with an unbeaten week in the promotion battle at Plettenberg Bay Country Club.

Just half a games point separated KwaZulu-Natal and North West at the start of the final round and it was that slender advantage that secured victory for KwaZulu-Natal at the end of an epic clash that went right down to the wire.

“Just like last year, it was such a tight fight. North West denied us our title defence in Potchefstroom last year by half a games point and today, we repaid the favour. I cannot talk enough about the character that our guys showed this week and particularly in the final round.

“We were 5-down, then 4-down and they rallied on the back nine to get us the six points we needed for the win. Amazing golf, amazing team spirit and a victory that the whole team shared. I am incredibly proud of their conduct, their golf and their performance.”

The 2017 champions were on the back foot when North West dominated the foursomes 3 – 1.

Having to rally from 1 – 3 down, KwaZulu-Natal’s Thomas Lovett and Jason Gilliver squared the match. Koenie Erasmus briefly put KwaZulu-Natal ahead with a 3 & 2 result against Gareth Petler, but Meleko Patric Maichotlo, who turned 2-up, held on to beat Sean Baker 3 & 2.

Tied at 4-all, the title fight headed for a dramatic finish as the last four games all went the distance.

KwaZulu-Natal’s Ryno Crous was 4-down with five to play, but he won the next four holes to square his game against Patrick Sefodi. Phillip Barnes was 1-up after 16, he let Jaco Anderson back into the mix with a bogey at 17. The pair halved in pars on 18.

Corne van Deventer was 1-down playing the last hole, but he got another half point for KwaZulu-Natal when Ray Janse van Rensburg bogeyed 18.

Beyers Smith from North West birdied 16 to go 1-up in the final game, but Jens Hillermann hit back with a birdie at 17 to square the match. When Hillermann’s approach into the final green finished well short, the Noordberg golfer squashed North West’s glimmer of hope with a brilliant chip that ran the length of the green and stopped just three feet short of the pin.

The pair both birdied the final hole, but Hillermann’s four sealed success for KwaZulu-Natal with half a games point.

“I must applaud Cliff Barnard and the green staff here at Plettenberg Bay Country Club,” said De Swardt. “They really went above and beyond the call of duty to present us with an absolutely pristine golf course and the fact that we had no placing this week, speaks volumes of the condition of the course and they work they did to give us a fantastic venue for this year’s SA Country Districts.”

In the other final round match, last year’s B-Section champions Northern Cape defeated Free State 8 – 4 to finish third in the log. Free State took fourth and Limpopo was relegated.

Boland began their B-Section campaign with an 8 – 4 win against Eastern Province and the side crushed Border 10 – 3 in the second round. They edged out Southern Cape 8 – 4 in the third round and another commanding performance against Mpumalanga in the final round to win 8 – 4 ensured their return to the A-Section.

“I am really proud of our unbeaten performance this week, because it’s the direct result of our preparation for this year’s inter-provincial,” said manager Servaas de Kock after his charges sealed success.

“After our relegation in 2017, we went all out in Potchefstroom last year, but we narrowly lost the title fight to Northern Cape. We started our preparation well in advance this year. All eight players were so committed. They worked hard on their own and played a lot of foursomes to get to know each other. This fostered a great team spirit and they started this tournament with mutual respect and trust.”

Boland and Mpumalanga were tied after the foursomes, but Clement de Bruin, Anton Pieters, WP Botha, Cedric Rooi, Ryk van Schoor and Daniel Cronje cemented their success with convincing wins in the singles.

“We were determined not to draw the short straw again and we are over the moon with the result,” said De Kock. “We are very proud of our rookies Clemet and Daniel, who shared the Most Valued Player honours. But really, this result is down to eight guys who played for each other.

“We are also really proud of our caddies, who fought for every point with us this week and even asked to do a prayer circle with us before the start of the final round. They were truly exceptional and we owe them a debt of gratitude for helping us achieve our goal.”

Southern Cape beat Eastern Province 7 – 5 to edge out Mpumalanga for second in the standings.