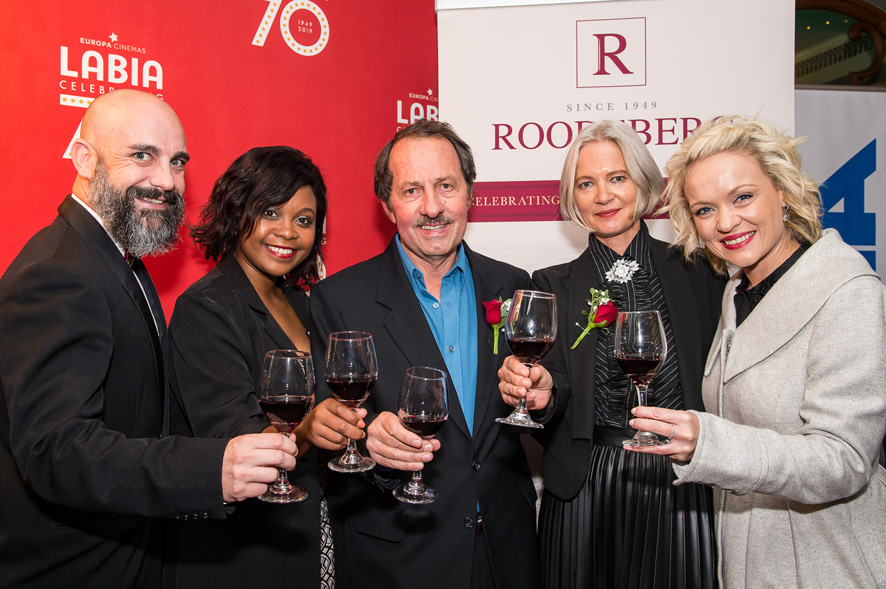 The Labia, Cape Town’s cherished independent cinema, celebrated its 70th anniversary with the first international screening of Rocketman, just three days after the film on the life and times of Elton John, was launched at the Cannes Film Festival in France. Roodeberg, the legendary red wine which also turns 70 this year, joined in the celebrations.

The debut screening of the film named after the famous 1972 song, Rocketman, took loyal patrons by complete surprise on Sunday, 19 May. The film is only scheduled to open in the UK on 22 May and the USA on 31 May.

The 70th anniversary celebrations will continue later this year with a Festival of Labia Highlights. Roodeberg also has big plans with new celebratory packaging and the launch of a special limited release, commemorative wine.

The Labia was opened officially as a theatre for stage performances on 19 May 1949 and enjoyed a checkered period as a mixed venue for live theatre and the screening of films on the alternative circuit. When current owners Ludi and Ann Kraus took over on 1 September 1989, the Labia was somewhat dilapidated with only one screen. Not unlike the little boy in the Italian classic, Cinema Paradiso, Ludi’s first encounter with the cinema was at the age of nine in his father’s movie theatre in Windhoek. Many years later he literally swapped professions overnight from being a lawyer to a cinema owner, and has been part and parcel of the Labia ever since.

Today he continues to offer loyal movie goers cinema magic of the classic old fashioned kind at an affordable price: “The magic of hearing the lion roar from Screen 1, cannot be under estimated – we’re still bringing out the old and fixing the in-between.”

As the city’s original and last surviving independent movie theatre after the costly transition from reel to reel projectors to digital took its toll, the Labia stands proud as the bastion of alternative cinema from art house movies, documentaries, foreign films and historical cinema to big ticket blockbusters. The Labia’s diverse movie festivals personally curated by Ludi, especially his foreign language films, are legendary.

“Looking back, foreign films were far more prominent in the old days. I recall the highly acclaimed Danish film, Babette’s Feast, running at the time when I purchased the Labia, and we opened our second screen in 1990 with the French film, La Lectrice (The Reader),” Ludi recalls.

Over the years the Labia has seen many upgrades from one to four screens and the transition from film to modern day digital screening; but the charm and nostalgia of yesteryear remains very much part of the Labia experience that starts with the old fashioned ticket booth in the foyer.

The change four years ago from film to digital sounded the death knell for most independent cinemas but on the plus side, this technological advancement has enabled the Labia to compete with the commercial cinema circuit by showing movies as soon as they are released.

“Changing from film to digital was like going from the dark into the light – the quality improved dramatically and films became more accessible,” adds Ludi, although he admits to longing for the nostalgia of the imperfections of the past from time to time.

Another significant change that has contributed to the Labia becoming more successful has been the increase of younger movie goers. “Our audience is becoming younger as millennials are looking for more ‘cool’ retro places to hang out than the glitzy spaces of the mainstream cinemas.”

This mix of his more longstanding patrons and the new wave of younger Labia cinema goers, has necessitated some significant programming changes.

“When choosing our films, our emphasis is firstly on quality – the film has to have merit – but we also need to ensure that the film has commercial value and will sell tickets. We no longer consider ourselves as strictly art house although art house films are still part of our programming.”

The younger audiences have opened up new film genres at the Labia including extreme sport films and festivals such as surfing, cycling, and horror movies. British feel good films, on the other hand, resonate well with the older generation.

The loyalty of the Labia patrons over the years has been nothing short of astounding. During the difficult and costly transition from film to digital, the patrons themselves, fearing that the Labia might have to close, initiated crowd funding to help upgrade the equipment. With their help and through networking with fellow Europa Cinemas members, the Labia was able to upgrade to digital projectors for all four screens.

Looking at the future with the increase in streaming, downloading and watching movies on laptops and cell phones, Ludi is optimistic and believes the Labia is less affected than its mainstream counterparts. “We hope we still provide a little bit of magic by allowing our patrons to make an event out of visiting the Labia.”

Collaboration with nearby restaurants, Societi Bistro, Knead and Diva, offering movie meal specials, and the Labia’s own outside terrace, create more of an ‘outing’ for  movie goers.