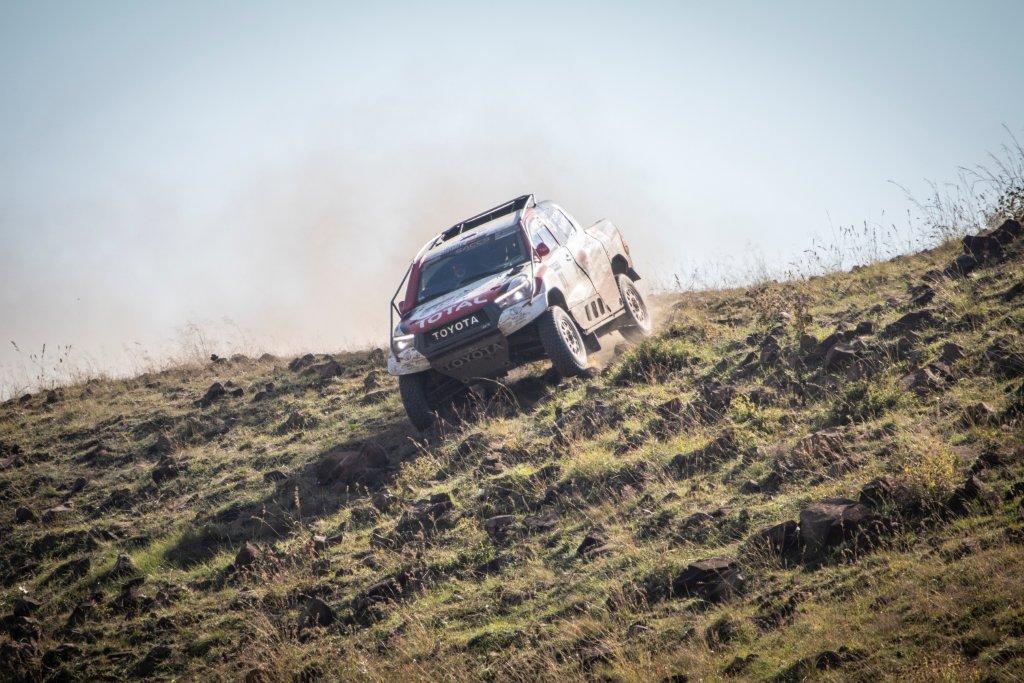 Brian Joss – It was an all-Toyota podium at the Berg 400, Round 2 of the 2019 South African Cross-Country Series (SACCS), as the Toyota Gazoo Racing SA squad placed first, second and third overall.

“We had an amazing race, despite some very tricky terrain,” said an ecstatic Toyota Gazoo Racing SA Team Principal, Glyn Hall, after all three his crews sprayed the bubbly from the post-race podium. “To make matters even better for the spectators, there was a spectacular battle between Henk and Giniel for overall honours.”

In the end, it was Henk Lategan and navigator Brett Cummings who brought their Class FIA Toyota Hilux over the line in first place, followed by winners of Round 1, Giniel de Villiers and Dennis Murphy, 04:27 behind them.

The battle between the two crews started during the qualifying race, held on Friday 17 May, which saw De Villiers/Murphy draw first blood. This gave them the dubious honour of opening the route for the main event – and a cruel twist of fate saw them lose the lead to their teammates after just two kilometres.

“We had hardly started when we suffered a puncture,” said De Villiers. “But that was only the beginning…”

A torrid race followed, with both crews suffering multiple punctures and upsets along the way. For De Villiers/Murphy it started with two punctures on the opening loop, and culminated with power steering problems 30 km from the finish.

“It was a brutal race, and even though we managed to dig deep in the second loop, we just couldn’t stay ahead of our teammates,” said a rueful De Villiers after the event.

Not that it was plain sailing for Lategan/Cummings either. The pair had their own share of punctures, and even battled a small fire when the grass stuck in the front wheel of their Toyota Hilux caught alight while stopped to change a wheel.

Despite the trials and tribulations, Lategan/Cummings prevailed in the end, bringing their Class FIA Toyota Hilux home safely. This was a maiden win for Cummings, competing in only his second race with the team; and a second overall victory for Lategan, who opened his account during 2018.

“The route was extremely tricky in places, and the rough terrain made it very easy to make a mistake,” said Lategan after reaching the Designated Service Park (DSP), south of the town of Winterton in KwaZulu-Natal. “But Brett was great in the car despite suffering from motion sickness, and I’m extremely pleased with the result.”

Behind the duelling duo of Lategan and De Villiers, Shameer Variawa and Juan Möhr qualified in seventh place, and as a result had to battle their way through the dust of slower competitors during the first loop. The second loop saw the former Special Vehicle champion make up plenty of ground to finish in third place.

“Overall we had a really good outing in KwaZulu-Natal,” said Hall. “Next up are a couple of big, International races, before we head to Botswana for the only marathon event on the SACCS calendar. This is always a big one for us, as it is a Toyota-sponsored event, and we can’t help but feel some added pressure.”

The first of these is Rally Kazakhstan, which takes place in a week’s time, and two Toyota Gazoo Racing SA Hilux race cars will be in action there. One will be in the hands of Nasser Al Attiyah and Mathieu Baumel; and the other will be piloted by Bernhard ten Brinke and Tom Colsoul.

The Toyota Kalahari Botswana Desert Race will take place mid-June, and will be moving to a new location near the town of Selebi Phikwe in Botswana.

CAPTION:  Brutal battle: Henk Lategan and Brett Cummings on the way to the podium. Picture: Motorpress