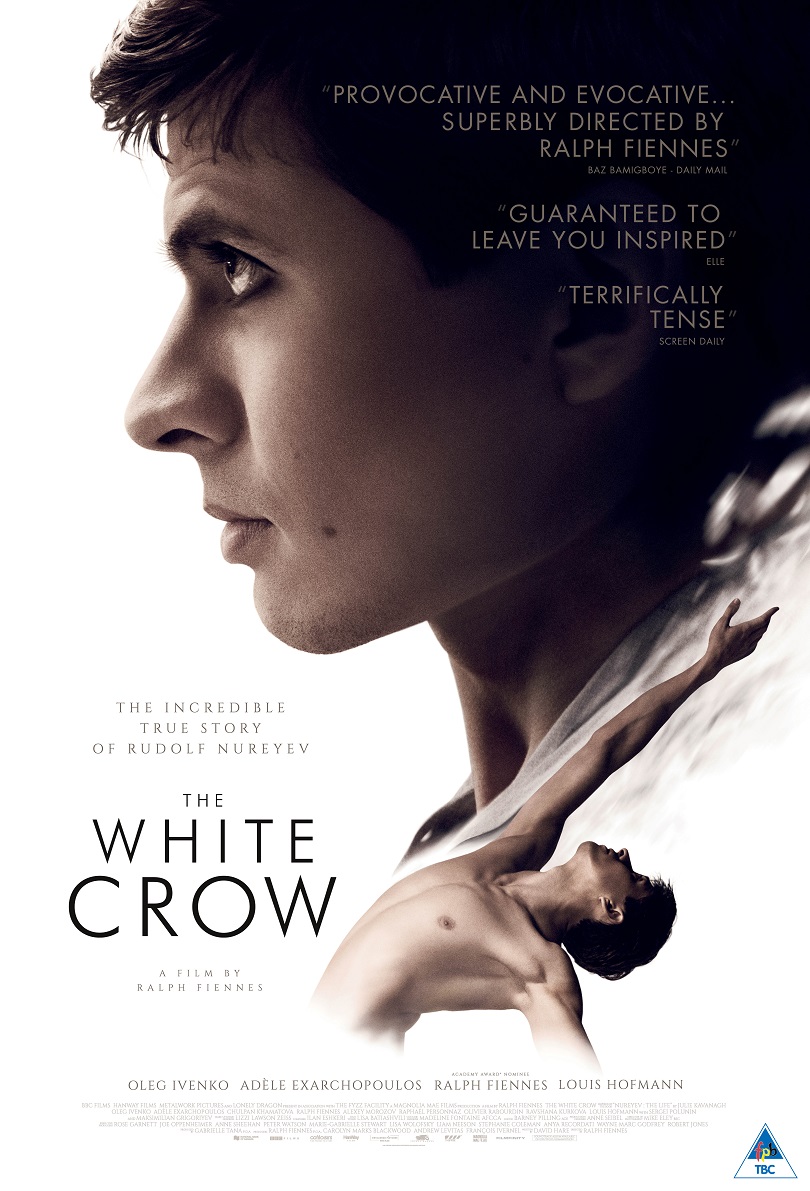 The term “white crow” is Russian slang for a person who is unusual or unlike others. Double-edged, it is used to refer both to someone of exceptional ability and to an outsider who doesn’t fit in anywhere. Acclaimed Russian ballet superstar Rudolf Nureyev epitomises this concept.

Known for performances that were sinewy and sensual, Nureyev inflamed Cold War tensions when he became one of the first megastars to defect from the Soviet Union in 1961. In THE WHITE CROW, director Ralph Fiennes tells the story of the ballet legend and his sensational escape to the west.

From Nureyev’s poverty-stricken childhood in the Soviet city of Ufa, to his blossoming as a student dancer in Leningrad and his arrival at the epicentre of western culture in Paris in the early 1960s, THE WHITE CROW is the story of an incredible journey by a unique artist who transformed the world of ballet forever.

Elegantly scripted by playwright David Hare, the film is adapted from Julie Kavanagh’s biography of the legendary Russian ballet dancer, whom Fiennes first became obsessed with after reading Nureyev: The Life, almost twenty years ago.

“The story sat with me as a great possibility for a film. I didn’t really see myself directing it. It was just the idea,” he explains. “It’s so dramatic and is about so many things. It has an interior personal dynamic, the drive for Nureyev to realise himself and the ruthlessness that goes with it. It’s also within the context of the ideological divide between east and west at the height of the Cold War.”

Before Nureyev, the audience’s gaze was primarily drawn to female ballerinas, with male dancers effectively on stage as strong, handsome statues.

“He was obsessed with dance and obsessed with actually making his profile on the stage as significant as possible. He wanted to be as captivating as the ballerinas were and he reinvented male performance. He wanted to make sure everybody was watching him,” says producer Gabrielle Tana.

“It was that character, that will that made him realise who he was an artist that really grabbed me,” adds Fiennes. “We wanted to make a film about somebody who was exceptional and who broke with convention.”

Hare transformed their idea into a reality. “The film is about the moments during which he becomes the most famous dancer in the world for two reasons. The first being his dancing and the second being that he was the first significant Soviet citizen to defect,” he says. “I wanted to tell that story and spread some respect for the incredible dedication you need to be brilliant in an art form and how hard you have to work to be that good. It’s very rare to see that represented on film.”

THE WHITE CROW is Fiennes’ third film as a director, following Coriolanus and The Invisible Woman. As a director, he shows the same alertness for telling details and rich characterisation that he does as an actor. In addition, authenticity is key to his work – he cast Russian dancers and actors and had them speak Russian to each other on screen.

Believing it would be impossible to teach an actor to dance like a master, Fiennes also made the bold decision to cast a dancer in the lead role. Nureyev is brilliantly played by young Ukrainian Oleg Ivenko, a soloist at the Jalil Tatar Ballet Theatre, who brings just the right note of youthful energy and swagger to the role.

Ivenko gives a dancer’s insight into what made Nureyev special: “Rudolf had an incredible energy that he translated on to the stage,” he explains. “He worked really hard at the top of his ability. He entered the stage and lived his life onstage. Quite often, dancers are like robots, they perform a combination of movements, but he came out and lived it. He was inspired by paintings, art, books and people who inspired him to act, to achieve. It was all connected in him. He listened to his inner voice and what was interesting to him personally. He followed this line and stuck to it.”

Throughout the film the ballet sequences are beautifully executed, and dance is represented as a transcendental experience of success, of leaving behind the past and reinventing the future. Ivenko is an accomplished performer and the supporting cast includes the real-life ballet star and actor, Sergei Polunin.

Fiennes himself plays the film’s most understated role (which he delivers entirely in Russian) – that of Alexander Pushkin, the famed dancer master who sees something in Nureyev’s passion. Pushkin’s wife, Xenia (Chulpan Khamatova), also takes a special interest in Nureyev, eventually inviting him into their private apartment, where she seduces the dancer.

The film sees a young Nureyev travel to Paris with the Kirov Ballet. There he befriends French dancer Pierre Lacotte (Raphaël Personnaz) and socialite Clara Saint (Adèle Exarchopoulos), who is mourning the death of her lover, who happens to be the son of André Malraux, France’s minister of cultural affairs — and a good ally to have when seeking political asylum.

Parisian life delights Nureyev and the young dancer is eager to consume all the culture, art and music the dazzling city has to offer. But the KGB officers who watch his every move become increasingly suspicious of his behaviour and his friendship with Saint. In a series of hugely entertaining moments, we watch him discover Paris while evading his KGB handlers.

Tension mounts significantly in a brilliantly staged sequence in the Paris airport as the Kirov troupe prepare to fly to London. A standoff develops at the airport – on one side are the Russians, who order Nureyev home, and on the other side is his ambition to succeed on a world stage and charge into a scary unknown.

“The film is a portrait of the artist as a young man with all his jagged edges, his loneliness, his imagination and his mischief,” says Fiennes. “There’s an unpleasantness and a ruthlessness to him, but it’s youth looking to realise itself. I find that very moving.”

THE WHITE CROW is an impressive, dance-heavy biopic that focuses on Nureyev’s childhood, training, and life-changing visit to Paris. The film is distributed by Filmfinity (Pty) Ltd. and will be released nationwide on 14 June 2019