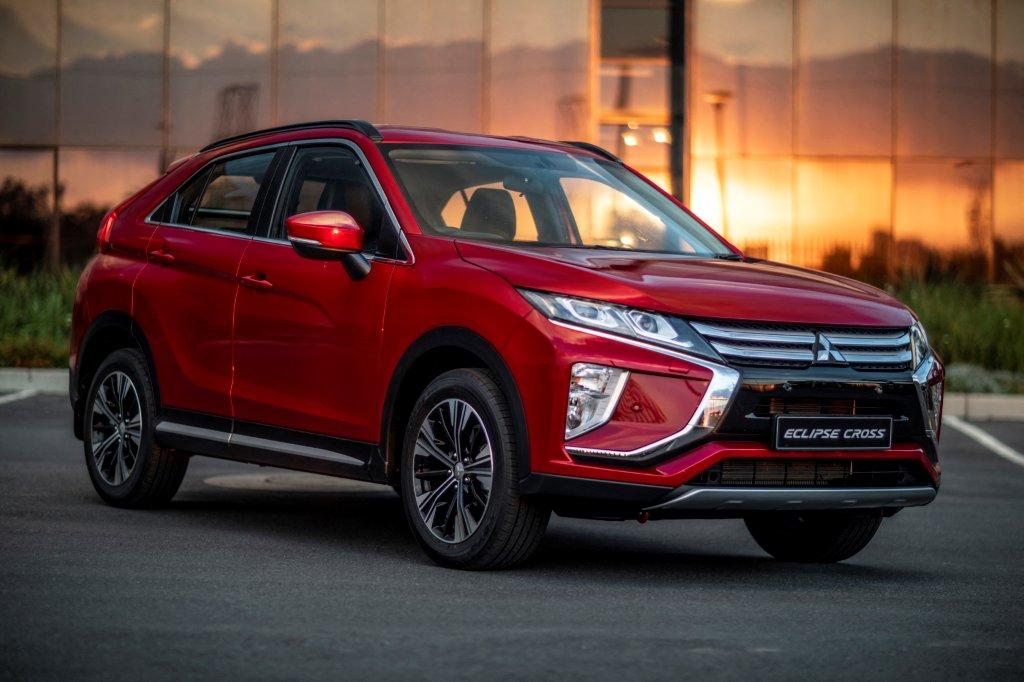 Brian Joss – Mitsubishi’s new Eclipse Cross eclipses quite a few SUVs I’ve driven in the recent past. It doesn’t pretend to be a serious off-roader, it’s more of a soft-roader and it’s definitely stepped out of Mitsubishi’s design comfort zone. At first glance it looks bigger than many other urban warriors but in reality it’s a mid-size compact SUV that can happily accommodate an average size family, two in front and three in the back.

The Eclipse Cross is an unusual looking vehicle, not quite what we have come to expect from the Japanese car maker which made a name for itself in the brutal Dakar rallies, the original versions and the later, just as challenging races. It looks like a coupé from the outside but with a wedge shape and it grows on you.  The front end is sharp and features the same large headlights as those fitted to the Pajero. The sharpness is repeated in the rear. The back window is divided into two but the light bar at the rear does hamper vision.

Some of the niggles I have are the limited boot space, but there’s a reason for that, and in my view I think the motor could do with a turbocharger but that would add a few thousand rand to the price tag. The CVT, which at its basic level is similar to that used in a scooter does whine occasionally.

Apart from those few issues the Eclipse Cross is worth much more than a second look especially if you’re seriously looking at a SUV. The crossover vehicle will do well in this highly contested segment of the market where manufacturers are constantly dreaming up new ideas.

Eclipse derives its name from the company’s popular specialty coupé model sold in America, from 1989, while Cross is short for crossover. If you’re a fan of the Fast and Furious movie franchise then the star of the first instalment was the green coupé driven by the late Paul Ward. That was a Mitsubishi Eclipse but the only similarities between the Cross and that Eclipse is the coupé shape and the Mitsubishi name plate.

Inside, the cockpit has a sporty feel to it. The black leather seats, heated in the front,  with red stitching are de rigeur and the soft-touch dashboard adds to the premium feel as does the electrically adjustable steering wheel which helps you to get into a comfortable driving position easily and quickly. The  infotainment system, incorporating the audio system, is easy to use although you have to give the some of the icons more than one tap to wake them up. SatNav is included but you could use the built in Apple CarPlay/Android Auto which offers Google Maps and a music streaming service.

The technicolour HUD (Heads-up display) which shows the speed you’re travelling at is adjustable through a switch on the right underneath the dashboard. Voice control is an optional extra and standard is a touch-screen radio which is also easy to operate. There is a neat storage tray for your smartphone and USB connectors in the centre console. The cockpit-type layout is focused on the driver, who, as a result, has command of the crossover in all conditions on or off the road.

A lot of drivers don’t like CVT (continuously variable automatic transmission) mainly because it doesn’t seem that responsive when you put you put foot a bit. But I don’t have a problem with it and it has improved a thousand times since I drove the Mitsubishi Lancer more years ago than I care to remember. Then,  the CVT made a noise like a playing card makes when you attach it to the spoke of a bicycle wheel. I kept stopping the Lancer to see if a piece of cardboard had been trapped underneath it.  In the Eclipse Cross there is a bit of a whine from the CVT but it soon disappears when you reach cruising speed.  There are gearshift paddles if you want to get into manual mode. However, the CVT is more than up to the task so you won’t need them.

I enjoyed driving the Eclipse Cross even though I thought it was a bit underpowered. Although that doesn’t translate into disappointment I did think it needed more oomph off the line. However, it is on the open road where is comes into its own and it easily keeps up with fast-moving traffic on the freeway. It’s agile and is stable around corners without any noticeable body roll. The wheel at each corner helps with road holding and the Eclipse Cross handled most road imperfections with ease.  Fuel consumption is higher than Mitsubishi’s claim of 7.9l/100 km. I recorded figures of just over 9l/100 km which is about average for this segment.

Interestingly, the 4×2 has a 63 litre fuel tank while the AWD can take 60 litres.

Boot space has a capacity of 378 litres, while the Mazda CX-5, one of its rivals, offers 442 litres (The Gremlin, January 10, 2019). The full size spare wheel takes up a lot of space. However, there is enough room for a suitcase or two if you’re planning a long-distance trip. When the seats are folded flat it expands to 1 024 litres,  similar to other SUVs on the market.

The launch of the Eclipse Cross has given Mitsubishi the chance realign the ASX (The Gremlin, September 12 2017)  range with the introduction of two new derivatives – the ASX ES M/T and an ES 6-speed CVT derivative, and fits below the Cross with the Outlander on top.

Summing up, the Mitsubishi Eclipse Cross 2 litre CVT 4×2 is a strong challenger in this segment of the market. It’s fun to drive, attractive to look at, it’s comfortable and reasonably fuel efficient. The 4×2 is good value for money at R399 995. The AWD variant has a price tag of R449 995.

I would be hard-pressed to choose between the Eclipse Cross and the Mazda CX-5 which I drove from Cape Town to Johannesburg earlier this year. I would have to rely on the toss of a coin.