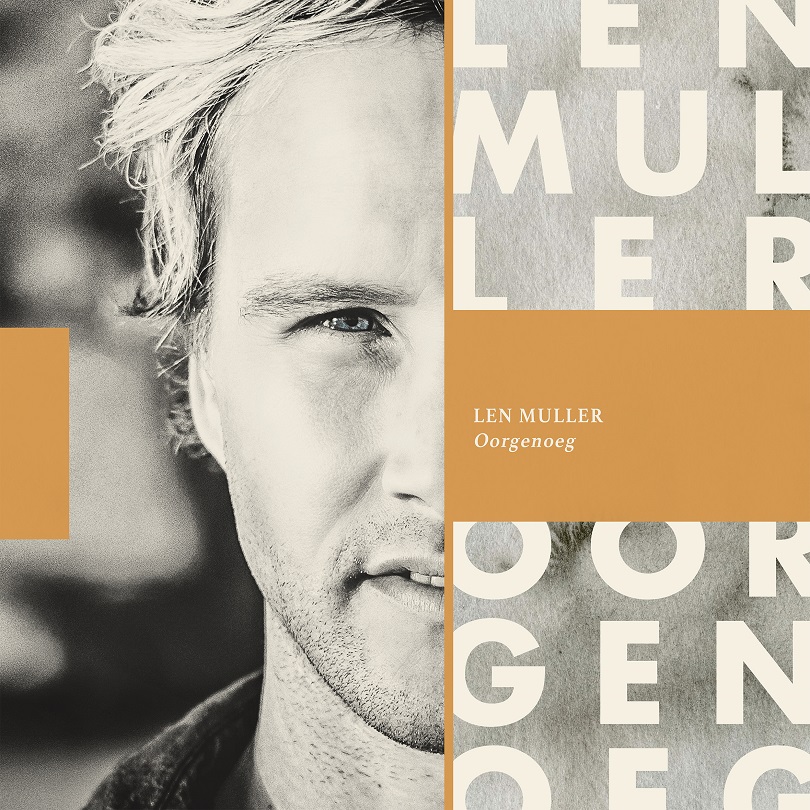 Len Muller is a versatile and talented musician who is best-known for his grippingly beautiful music that has already won the hearts of music lovers from all over the country.

OORGENOEG, the superstar’s latest single, is a striking Afrikaans Acoustic song, which not only showcases his skills as songwriter and singer, but will also satisfy the most critical ear.

The single can be described as raw and honest and comes from a very special place in his heart. “Poverty in our country is something that has made me sad since I was a little boy and I have shed a lot of tears about the fact that some people have to live on the streets. I have never been able to understand why certain people have more than they could ever need, while others are starving. The song originated from my frustration about greed,” Len explains. “Although I am unable to provide a financial solution to the problem, I still have music and if my song could only change one person’s perspective on the situation, it would be worth it. The lyrics are simple and honest and it is a song that is very dear to me.”

OORGENOEG, produced by Bellville Studios’ Theo Crous for Len’s upcoming album, is also the first song he recorded with his sister, Miemie Blaauw, who joins in at the final chorus of the song. “She made me cry in studio and it was a very special,” he shares.

According to Len the music video was created to provide a platform for the song and to show listeners what happens behind the scenes at a recording studio. “Instead of telling a story, the idea was to share more about the creative process. The song speaks for itself and the video supports that message,” he explains. “We wanted to film visual elements in open spaces while I was busy performing.”

The video was filmed at the Voortrekker Monument shortly after Len’s show at Park Acoustics where the song was performed live for the first time. It was filmed and produced by Blimp Films’s Reghardt, Werner and Nelis Botha.

The singer’s latest release follows in the successful footsteps of his big hit, Vrede, which was also the theme song of kykNET’s star-studded (Bobby van Jaarsveld, Lea Vivier, Sandra Prinsloo, Crystal-Donna Roberts, Reynardt Slabbert and Solomon Cupido) sitcom, Mense Mense, which was launched in March 2018. The music video was also used to market the show and has already had more than 33 000 views on YouTube. The single, written in association with Roan van As and Raldo Mattheus, featured in the number one spot of various radio charts and is one of his most successful song up to date. It has been downloaded and streamed by more than 60 000 listeners on Apple Music, Shazam and Spotify, collectively and is also listed as one of the most streamed Afrikaans songs on Len’s online platforrms.

Sterrewals was released at the end of 2018 and was equally well received. It is a nostalgic balled that he wrote for his wife, Chanél, after they got married. Vrede and Sterrewals were both taken from his second studio album, Oog Van Die Storm that was released in 2017.

This album has already delivered numerous radio and television hits, including the feel good song, Ek Glo, that topped the charts of various radio stations for several weeks. The music video was an instant hit, has been viewed by thousands of people on YouTube and is regularly featured on TV. Sing vir Sente, the second song he wrote with Faraway George, was released in June 2017 and can still be heard on the radio.

Len’s debut album, Doodgewone Avontuur, was released in 2015 and officially launched his career in the South African Music Industry. This masterpiece also got him nominated for various Ghoema- and Tempo Awards, including Male Artist of the Year and Newcomer of the Year. Since then he has managed to conquer the hearts of many Afrikaans music lovers and is best-known for his duet, Vir Die Een Wat Geval Het, with Joshua na die Reën, as well as Smag na Jou, which was included on the soundtrack of the romantic comedy, Strikdas.

Over the past few years, Len Muller has shared the stage with some of South Africa’s biggest stars, including Jan Blohm, Bok van Blerk, Dans Dans Lisa, Chris Chameleon, Jak de Priester, Francois van Coke, Andriëtte Norman, Dan Patlansky, Matthew Mole and Kaleidoskoop. He has also performed with Afrikaans Akoesties and at all the big music festivals across the country.

The artist also joined forces with Joshua na die Reën, Kaleidoskoop, Leon Gropp, Lizandra Winter and Liani Reynolds to create a very special project called Musiek Soos Grond, which took place at Villa Avianto in Bloemfontein and The Big Red Barn in Pretoria in May 2019. This concert was the first of its kind in the country and aims to provide a platform for contemporary musicians to showcase their lyrics, stories and versatility on stage. The concept was extremely well received and there has already been numerous requests for the show to be repeated. Lugballon, a single and music video created by the artists involved to market this project, is currently featured on various platforms.

On May 31st 2019, Len will be releasing his new EP and he is very excited about sharing it with his fans. It has always been his dream to release an album that is not overly produced and has a more organic feel. The EP boasts five original hits, including his latest single and is definitely the perfect collector’s items for listeners with a taste for acoustic music. “I have been wanting to release live acoustic versions of some of my songs, with just a few instruments like the cello, banjo, ukulele and acoustic guitar, for a long time,” he shares. “Experts predict that in the future machines will be able to produce music perfectly and that humans will no longer be needed in this process. To me, being human and vulnerable is an important part of creating music – even if a guitar string snaps in the middle of a session – because that is what makes it real. Just like humans, music is also not always perfect.”

He adds: “It has been seven years since I made the decision to become a full-time musician. Two solo albums later, I am still not always convinced that this was the right decision. What I do believe, is that it is my passion and calling. I also found that trying to commercialise my songs does not work for me, because listeners tend to appreciate my own style more. I do not want to feel like I have to compete with other artists to be in the ‘limelight’, because music is not actually supposed to be about the individual. Everyone deserves their own place in life. I want to contribute towards building an upside-down kingdom; where those who come last is actually first, those who are small are actually big and influential, and those who are poor are actually rich. In this kingdom, everyone will have more than enough.”

OORGENOEG not only serves as the perfect teaser for Len Muller’s new album and also has the potential to make a difference in a country where so many people are suffering.  The single is now available on all digital platforms here: http://ditto.fm/oorgenoeg