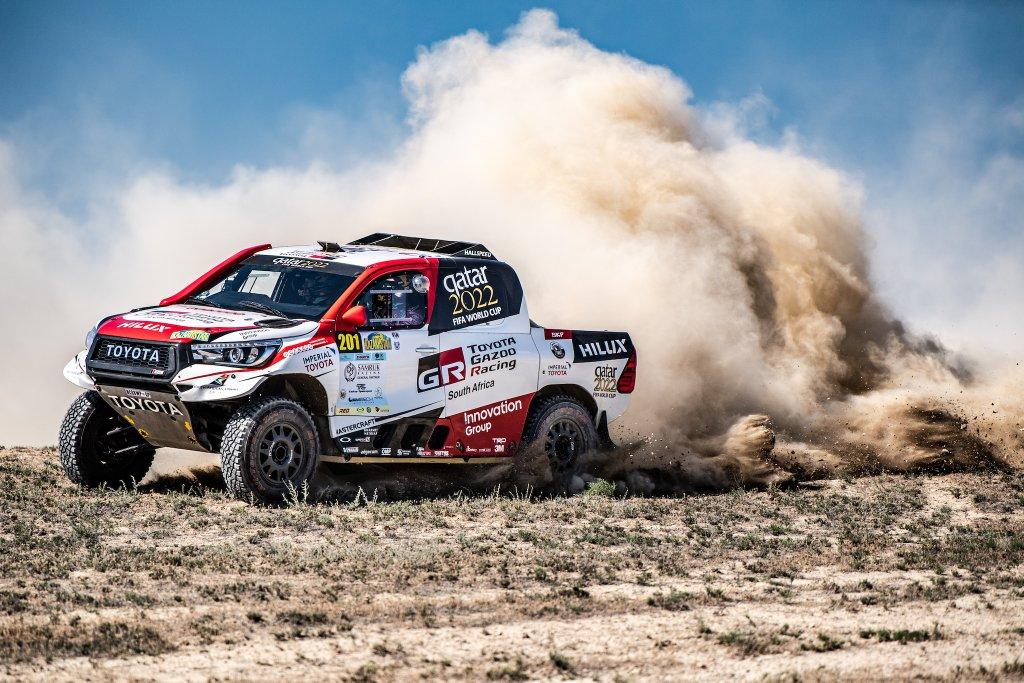 The pair started their assault on the race, Round 3 of the 2019 FIA World Cup for Cross-Country Rallies, in fine style – completing the 280 km-long opening stage in a time of 2:22:03.

This gave the Toyota Hilux crew a lead of only two seconds over last year’s winner, Yazeed Al Rajhi, who is driving a similar Toyota Hilux this year.

The Saudi businessman is partnered with Dirk von Zitzewitz (Germany) for this event, and is clearly hungry for another victory in Kazakhstan.

“We had a good start to the race,” said Al Attiyah after reaching the bivouac at Kenderly, on the Caspian Sea. “But we had to open the road, which made navigation tricky in places, and I’m sure we could’ve gone faster if we weren’t the first car out this morning. We also had one puncture, which certainly didn’t help.”

Dutch driver Bernhard ten Brinke, now partnered with Tom Colsoul (Belgium), fell foul to the vagaries of the route from the city of Aktau to Kenderly, losing time as a result. The Toyota Gazoo Racing SA pairing also suffered two punctures during Stage 1, and now find themselves just over eight minutes adrift, having gone fifth-fastest on the day.

“I’m not worried at this point. This is a long race and a lot can still happen,” said the ever-buoyant Dutchman from the bivouac. “Eight minutes is not a lot of time in this environment, and we’ll push again tomorrow.”

Both crews reported that the Toyota Hilux ran perfectly, and are looking forward to continuing the race on Stage 2. This will see the crews race inland, completing a mammoth looped stage of 414 km, with a short liaison of only 9 km.

“This is the longest stage of the event,” concluded Al Attiyah, “but there are two more really long, tough stages coming. So we have to be strategic about our approach, and manage the race over the course of the event.”

Rally Kazakhstan forms part of the FIA’s World Cup for Cross Country Rallies, which was scheduled to take place over just five rounds this year.

However, the Turkmen Desert Race, which was scheduled to take place during

5-11 May was cancelled, which means that this year’s world cup will be decided over four rounds, of which Rally Kazakhstan is the third. The championship will draw to a close with the Rally of Morocco, which takes place in October this year.

Rally Kazakhstan will be contested over six racing stages, with a total racing distance of nearly 2,000 km. The race started in the city of Aktau, and will cover large sections of the country to the south and east, before returning to the same city for the finish on June 1.