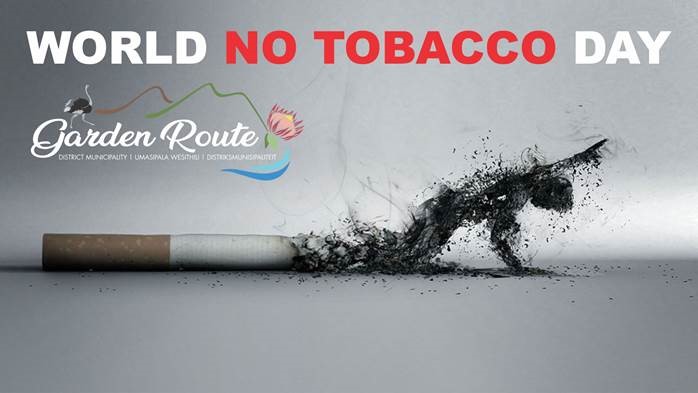 The march will start at 10H00 at GRDM (Head office), proceeding up York Street, right at Hibernia Street, and then a turn will be taken at Cradock Street, marchers will proceed towards Engen garage, from there, those marching will move back to GRDM (Head office).

World No-Tobacco Day is held across the world every year on 31 May.  The theme from the World Health Organisation (WHO) for 2019 is “Tobacco and Lung Health”.

It highlights the link between the use of tobacco products and lung diseases.

The campaign will increase awareness on:

Each year, the WHO selects a theme for the day in order to create a more unified global message for World No-Tobacco Day. The focus this year is on the harmful effects that all tobacco products have on the health of the lungs and even more so, the undeveloped lungs of babies and children.

According to WHO, globally an estimated 165 000 children die before the age of five (5) of lower respiratory infections caused by second-hand smoke. Those who live on into adulthood continue to suffer the health consequences of second-hand smoke exposure, as frequent lower respiratory infections in early childhood significantly increase risk of developing chronic obstructive pulmonary disease (COPD) in adulthood.

The poisons in tobacco smoke inhaled by a pregnant women or second-hand smoke exposure experienced by them, will affect an unborn baby which may result in low birth weight, a cleft lip or palate. Babies also risk being born prematurely.

“Looking after little lungs” is a call-to-action to raise awareness that active and passive smoking of those around children can affect their underdeveloped lungs so increasing their chances of getting pneumonia, bronchitis, asthma and continuous ear infections. Pregnant women should never smoke a hookah (water pipe) as that is the same as inhaling 100 cigarettes in one session.  Parents and other caregivers should smoke outside the house and never in a vehicle if there is a child under 18 years present. Smoke stays on the breath of a smoker so parents should take a few deep breaths before going into the house.  Smoke particles can also stick to clothing which the child can inhale causing lung damage.

Tobacco smoke can hang in the air for up to five hours, exposing those passing through to an increase in respiratory diseases, cancers and reduced lung function.

It is better never to start smoking because it is known to be difficult to end the cycle. Smoking cessation is possible and it has huge health benefits.