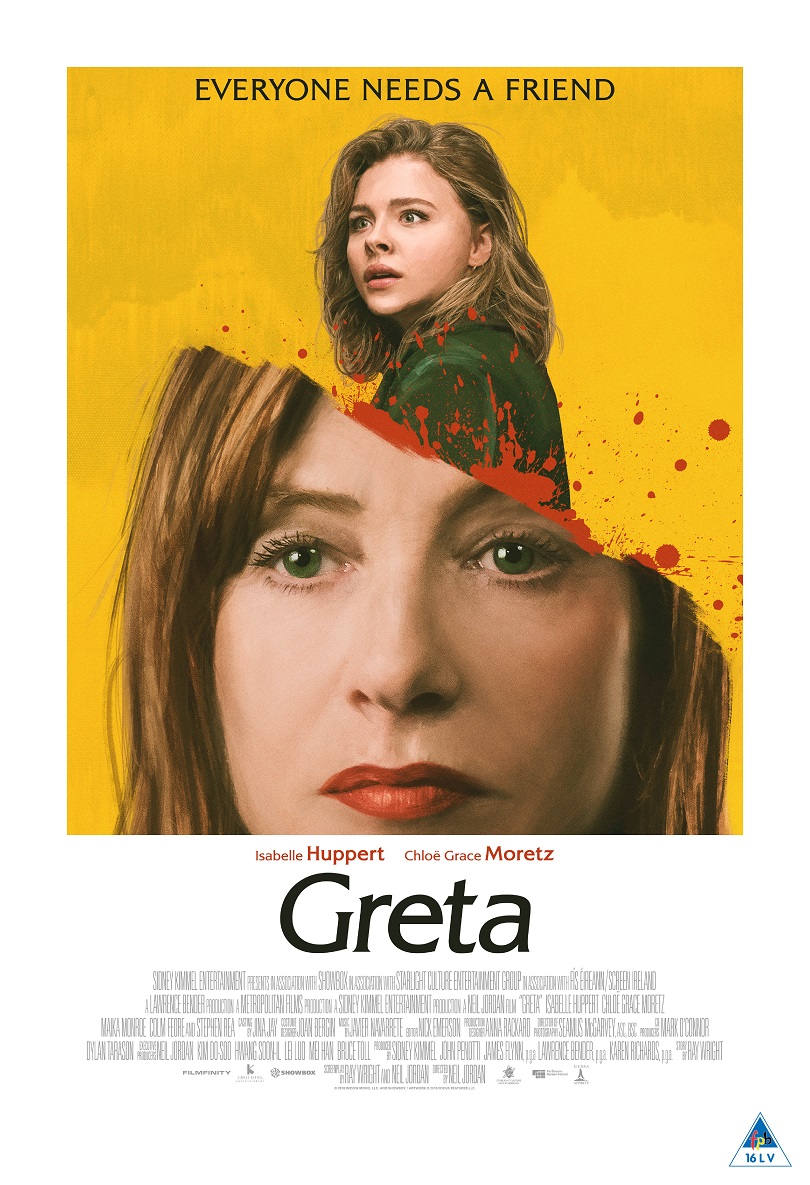 What is unrequited love, a.k.a. ‘limerence’? The state of being infatuated or obsessed with another person, typically experienced involuntarily. Where is the tipping point when it becomes obsessive or pathological? What are the red flags?

GRETA is a contemporary psychological thriller from Academy Award-winning director Neil Jordan. Co-written by Jordan and Ray Wright, it tells the story of Frances McCullen (Chloë Grace Moretz), a young woman struggling to fit into New York life. She has a job as a waitress in an upscale Manhattan restaurant, misses her deceased mother, and feels estranged from her newly married father. Her only true friend is Erica Penn (Maika Monroe), a boisterous 20-something from a wealthy family with whom she shares an apartment.

After discovering a handbag on a New York subway train, Frances sets about returning it to its rightful owner. This good deed places her in the orbit of an enigmatic middle-aged widow named Greta, played by the unstoppable Isabelle Huppert.

According to Jordan he was hooked when he read the original screenplay of The Widow, written by Wright. “There was something intriguing about it,” says the director. “It’s the story of the relationship between a younger woman who has lost her mother and an older woman she befriends. It was written in that spare Hollywood style. I began to work with Ray and the script, adding different elements to it, and it became more intriguing as it went on.”

Grieving for her recently deceased mother, Frances strikes up an unusual friendship with Greta. As she tells the older woman, she is known by her friends for her loyalty. She is like chewing gum – she “sticks around”.

In between dog-shopping and cosy dinners, Frances makes an alarming discovery that changes her perspective on her new friend. When she tries to sever ties with Greta, things get stranger and more sinister and Frances’ once innocent remarks take on a very ironic resonance as Greta unleashes her inner stalker.

“The film, at its core, deals with loss, grief, and loneliness,” explains James Flynn, one of the film’s producers. “It’s about a young contemporary woman who is modern and forward-looking, and an older woman who is trapped in time.”

Seamus McGarvey, the film’s director of photography, adds: “It has all these things which make you think, ‘what a sweet story it’s going to be.’ Then, gradually, the unsettling tributaries of unease arrive. It’s done very subtly. These little harbingers of doom start appearing.”

In GRETA, Jordan delivers an entertaining melodrama, with Huppert and Moretz working exceptionally well together in the centre of it all.

Huppert delivers a gloriously theatrical performance as a deceitful woman who becomes dangerously obsessed with Moretz’s naive and trusting Frances. As a female antagonist of very small stature, it makes what she does – and what she is capable of – even more unexpected and terrifying. As a game of cat and mouse ensues, the legendary French actress gives a masterclass in crazy. She takes all the neuroses of her troubled characters in The Piano Teacher and Elle and amps them up a notch.

Commenting on the relationship between Greta and Frances, Moretz says: “It’s always an interesting experience filming a thriller or a horror movie because you’re dealing in emotions that are very heightened, and especially with this film, Isabelle and I felt it was very important to grow that friendship in the beginning, so when it does turn, and you find out who Greta really is, it comes as a sucker punch, and almost more so a heartbreak than just the fear that you feel in that moment.”

Monroe gives a great performance as Erica, the apparently conceited and snarky roommate who becomes more and more involved as the film progresses. The film also stars Stephen Rea as a private investigator hired to investigate Greta and Colm Feore Frances’ estranged father, while Zawe Ashton plays a mysterious woman with important information about Greta’s past.

In GRETA, Jordan is doing what he does best: subverting genre expectations and creating a unique and unexpected experience.

On his decision to direct this film, he says: “I’m more interested in stories that haven’t been told. I liked that the stalker was a sweet, middle-aged lady. That really intrigued me, and I wanted to see how I could play with that and push the stalker logic into some kind of twisted fairytale. It felt like a contemporary urban version of Hansel and Gretel; but it’s also about something quite serious. It’s about loneliness, and a character who is so lonely she’s willing to do monstrous things to keep people around. I found that desperately sad and interesting, so I just pushed it as far as I possibly could.”

GRETA is a contemporary thriller in the vein of films such as Fatal Attraction and Misery, with various twists and turns that the audience might not see coming. It is a skilfully executed psychological thriller that balances terror with elegant comedy, making it hard to resist… like an unattended bag on the subway that’s just begging you to look inside.

GRETA is distributed by Filmfinity (Pty) Ltd. and will be released nationwide on 5 July 2019