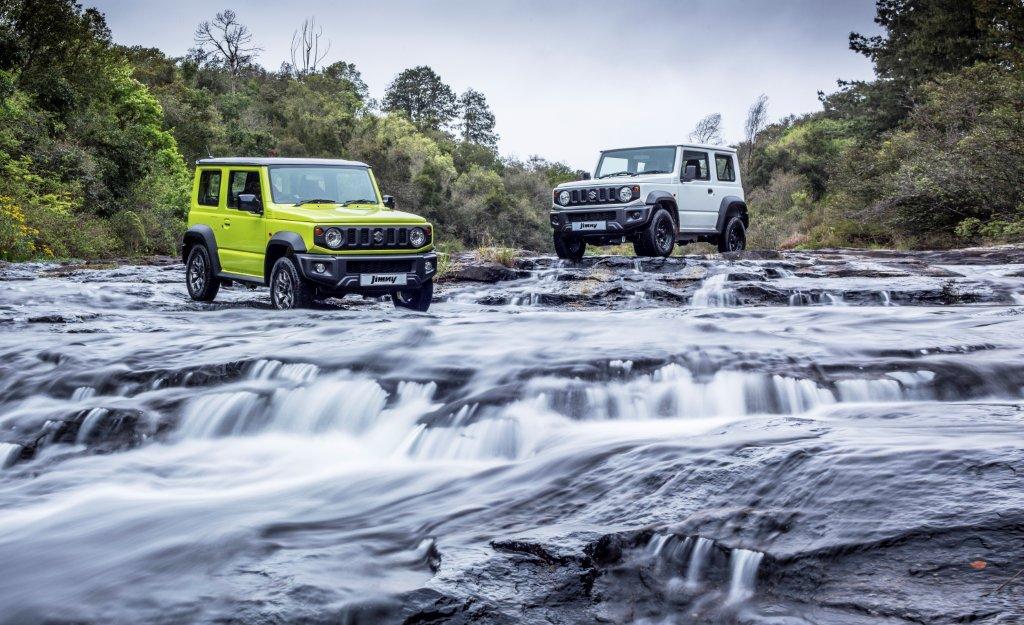 Brian Joss – The first time I drove the Jimny soon after Suzuki returned to South Africa in 2008 the little 4×4 that can, and did, got under my skin. In a word the Jimny had that grin factor and it still does.

But this time the grin factor is even bigger because of the improvements to the off-roader.  It really is a go-anywhere vehicle without all the frills that are fitted to some of the biggest 4x4s on our roads.

Suzuki’s history with the four-wheel drive goes back to 1958 when it bought Hope Motor Company, which had launched 15 small off-roaders known as the HopeStar ON360. And, as they say in the classics, the rest is history.

Legend has it that the name Jimny originated from a word picked up by Suzuki executives on a trip to Scotland. The 4×4 was to be called “Jimmy” but the word got lost in translation and they called it the Jimny.

Now there’s a fourth generation Jimny, and it has the same DNA as the original Son of Samurai which was powered by a 1.3 litre motor and was a far cry from the L10, the Light Jeep 10, the forerunner of the Jimny which was introduced in 1970.  Outwardly, the new Jimny, the first one in 20 years, looks the same but it’s on the inside where it is different, apart from cosmetic tweaks. Wherever I parked it drew a lot of interest from passers-by.

For starters it has a new 1.5 engine and the Allgrip Pro four-wheel drive with low range transfer gear  which replaces the push-button selection between 2H (rear-wheel drive), 4H (4WD high gear) and 4L (full low range, 4WD) with a shift lever that is directly connected to the transfer gear and can switch between 2H and 4H on the fly at speeds of up to 100 km/h.

The Jimny shares many design cues with its predecessors and is available in two specifications the GA and GLX and a choice of two gearboxes: a five speed manual and four speed automatic on the GLX (the test vehicle).

Design-wise it has the same upturned front fenders, round headlamps and round orange indicators in a nod to the LJ and SJ Series, 1970 – 1980 and 1981- 1998 respectively. The side slits in the clamshell bonnet is a tribute to the SJ Series. The upright grille recalls the previous generation Jimny (1998 – 2018) and the SJ Series. The newest Jimny has won a Good Design Award and a couple of other accolades.

In colder countries the flat surfaces and the thin window sills make it easier to push the snow off, just keep your gloves on, while the longer roof over the windshield helps to deflect direct sunlight from the driver.  The roof can carry more weight: a roof rack which can clip on to the all-round drip rail,  rooftop tent and skis if you’re heading to Tiffindell in Lesotho or Barkley East in the Eastern Cape. The lights have all been moved  into the horizontal rear bumper  to create a wider rear door to which the spare wheel has been fitted. The GLX has 15 inch alloy wheels, colour-coded door handles and painted exterior mirrors.

Inside, it’s nothing if not practical. The dashboard is designed in three horizontal layers and it includes an assist-grip and cell-phone tray on the middle level and a glovebox on the lower level. The tachometer and speedometer are housed in separate square binnacles and the instruments are always illuminated.  The upholstery is hardwearing and is easy to clean. The instrument panel housings have a brush metal finish. You can operate the switches and dials using heavy gloves and all stalks and dials are within easy reach of the driver. As  a concession to technology the Jimny has an excellent infotainment system with a large touch-screen boosted by Apple Car Play and Android Auto. Twenty years ago these nice-to-have were just twinkles in the engineer’s eyes.

The set-up is logical too. The 7 inch screen set in the centre of the dashboard is divided into four different sections, phone, audio, navigation and Car Play with the volume adjuster on the left.  The icons are large and even if you hit a bump in the road, which is often, your finger will stay on track. The SatNav is also easy to operate with good graphics. The GLX models are equipped  with Suzuki’s Smartphone Linkage Display Audio, a USB connector, SD-card slot and Bluetooth hands-free connectivity and which you can control by buttons on the leather-covered steering wheel.

The spare wheel is fitted to the rear door for easy accessibility, which also frees  up space underneath the luggage floor and allowing for an improved departure angle. The Jimny doesn’t have a boot to speak of and it’s is not really for your monthly shopping, although you could flatten the back seats to accommodate it. A 10kg bag of dog food fitted neatly into the removable tray behind the rear seats.

A few years ago, two friends of mine, both of whom were deep sea divers and salvors, took the old Jimny on a 3 500km round trip from Cape Town to Mozambique, carrying all their diving gear. The route included some hard bundu-bashing and seldom visited beaches and the Jimny didn’t skip a beat.

Back to the new Jimny. Although I didn’t have much time to put it through its paces on a really tough 4×4 course, I know from previous experience that it can really do the job. I did take it on some dunes but they were hardly a challenge for the Jimny. The secret to Jimny’s off-road credentials is the ladder frame chassis. But  In the new model, Suzuki’s engineers have added a patented cross member, the Suzuki X-member, between the two rigid axles, which helps to limit body flex in serious cross-axle off-road driving.  It also improves on-road driving dynamics and overall crash safety. The Jimny acquitted itself well on the tarmac but don’t expect it to give you the kind of ride you get from a luxury sedan. I’m not going into technical details about why the Jimny is such a successful off-roader. However, the new Jimny utilises the new  AllGrip Pro four-wheel drive with low range transfer gear and it replaces the push-button selection between 2H (rear-wheel drive), 4H (4WD high gear) and 4L (full low range, 4WD) with a shift lever that is directly connected to the transfer gear and can switch between 2H and 4H on the fly at speeds of up to 100 km/h. I found the gear lever easy to use and preferred it to the old push-button.

Features include Hill Hold Control and Hill Descent Control, which are standard on all models. Hill Descent Control will maintain a descent speed of 10km/h in 4WD high range and 5 km/h in 4WD low range, so you can focus on navigating obstacles, without using the brakes. Active safety features include ABS brakes with emergency brake assistance (BAS) and Electronic Stability Programme (ESP) to prevent wheel slip on all wheels and to help the Jimny track true on slippery surfaces and at high speed.

Under the bonnet  is a powerful 1.5 litre engine that delivers 75 kW at 6 000 rpm and 130 N.m of torque at 4 000 rpm. Which means it is more than capable of keeping up with fast moving traffic on the freeway. The motor is mated to a  four-speed automatic gearbox and the gear ratios have been optimised in line with all the improvements to the Jimny. The ATM was smooth and responsive to a nudge on the second pedal. Not surprisingly, the Jimny’s ride is more refined than the previous model.  On dirt roads, the few that I tackled, the Jimny delivered a good quality ride. It’s a bit bumpy over tar but that’s a small price to pay. When you go round corners at speed, watch out for the body roll.  It is a trap for the unwary, however, but it does not detract from the Jimny’s credentials. Fuel consumption was good: just less than 7litres/ 100km under different road conditions. Cabin noise was not intrusive and you could easily hear the chatter from the peanut gallery at the back. Incidentally there is more than enough head and leg-room. One niggle is that you have to be fairly lithe to clamber in to the rear.

The front seats have been redesigned and can fold flat with the rear bench so if there’s no room in the tent someone can sleep inside the cabin. The steering wheel can be vertically adjusted. In the luggage bay there are special utility hooks and holes for more hooks that you can get from your dealer. The luggage space is now 1 015 mm wide, on GLX models, the seatbacks are covered in hard-wearing plastic. The rear seats can fold down individually, there is a removable luggage box and toolbox under the floor area and there is an extra 12V socket to power a camping fridge, for one.

There are not enough storage spaces; the pockets in the doors are too small; and you can’t adjust the steering wheel for reach, if you want to nitpick.

Suzuki’s new-generation Jimny has that X-Factor and it is not surprising that the off-roader has gained a cult following. It may be small, but it’s a real powerhouse, By Jimny! You can use it for your daily commute where it’s quite at home in the city streets – but it’s to the bundu you’ll be heading for at the weekends – or even sneaking out for a mid-week break such is the allure of the Jimny.