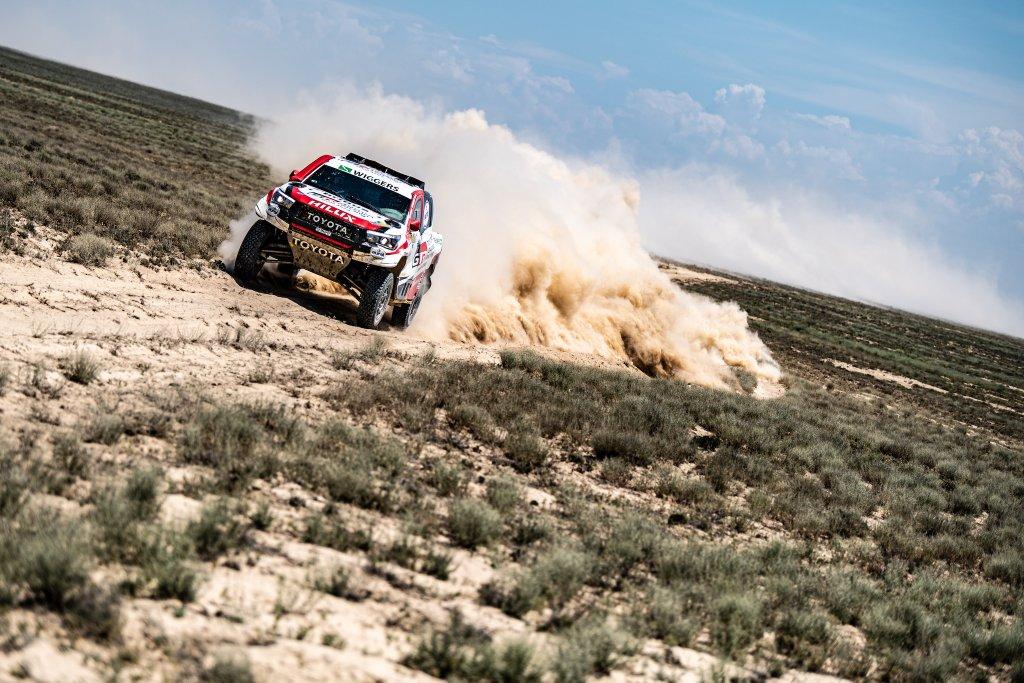 Brian Joss – It was another victory for Toyota Gazoo Racing SA’s Nasser Al Attiyah and navigator Mathieu Baumel, making it three on the trot, in Rally Kazakhstan on Wednesday, May 29th.

The Qatari Toyota Hilux driver, together with French navigator Baumel, drove a faultless stage, setting a time of 3:09:11 over the 328 km-long test.

“It was a really good day for us,” said Al Attiyah from the bivouac at Kenderly on the Caspian coast of Kazakhstan. “The car was simply perfect, and we had no punctures or trouble on the route.”

In the overall standings, Al Attiyah/Baumel’s clean run puts them nearly 12 minutes clear of the crew in second place – that of Toyota Gazoo Racing SA’s Bernhard ten Brinke and Tom Colsoul. The Dutch driver, together with his Belgian navigator, also reported an excellent stage, though they suffered a puncture near the end of the stage, losing time as a result.

Despite this, the Toyota Hilux crew went second-fastest on the stage, trailing Al Attiyah/Baumel by 03:36 to the finish. Ten Brinke/Colsoul, in turn, finished more than four minutes clear of Jakub Przygonski and Timo Gottschalk in their MINI.

Przygonski/Gottschalk are also in third place on the overall standings, just 27 seconds behind the Toyota Gazoo Racing SA crew.

“This places a lot of pressure on us for Stage 4, especially since we’ll be only the second car to tackle the route,” said Ten Brinke after completing Stage 3. “We’re also moving into a new area tomorrow, with more mountainous terrain, so it promises to be a real challenge.”

The fellow Toyota Hilux crew of Yazeed Al Rajhi and Dirk von Zitzewitz suffered a small rollover on Stage 3, having pushed extremely hard in the opening parts of the stage. The pair lead the stage at the mid-point, but then fell foul to a tricky corner, rolling the car onto its side. Damage to the Toyota Hilux was slight, and the pair will restart the rally for Stage 4, albeit under a penalty.

Stage 4 starts in Kenderly, which has been home to Rally Kazakhstan for three nights. The day will start with a liaison of around 100 km, before the 405 km-long stage kicks off. The route will then take the crews northward, before turning west for the finish, some 60 km north of the city of Aktau, where the bivouac will be based until the end of the event.

Rally Kazakhstan is part of the FIA’s World Cup for Cross-Country Rallies, where Al Attiyah was tied on points with MINI’s Stephane Peterhansel going into the event. With just one more round to come in the World Cup (the Rally of Morocco, in October), a win in Kazakhstan will cement Al Attiyah’s position at the top of the standings.

The rally draws to a close on June , , with a short, sharp stage of 150 km that will see the crews take to the finishers’ podium in the city of Aktau.