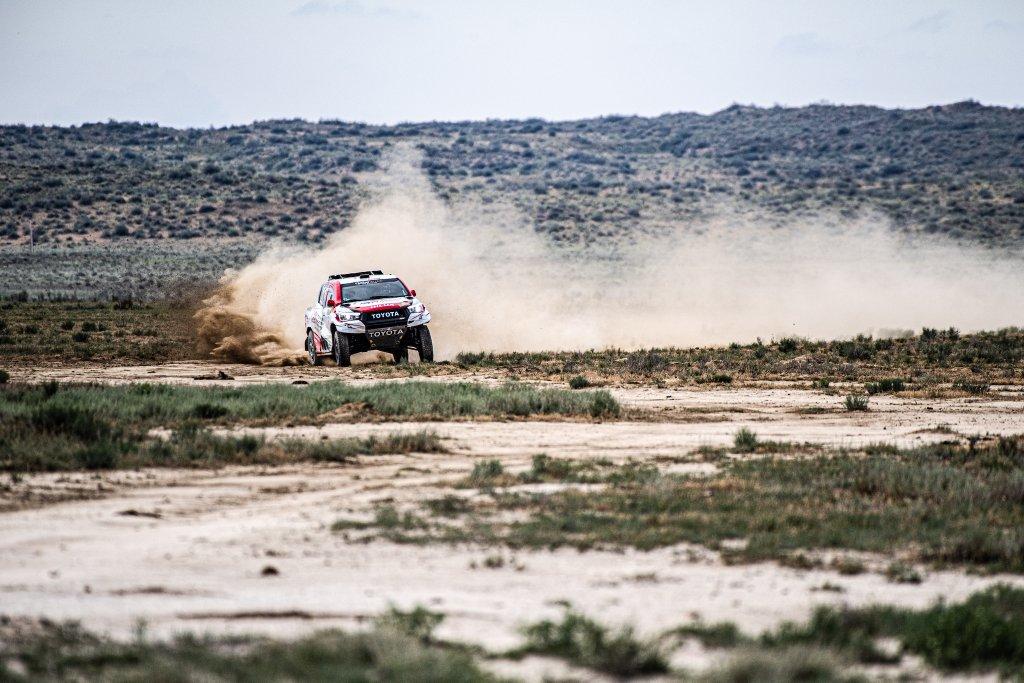 Brian Joss – Four stages have been completed in Rally Kazakhstan, round 4 of the 2019 FIA World Cup for Cross-Country Rallies, and for the fourth time in this race, a Toyota Hilux has won the stage of the day. This time round the honour went to Yazeed Al Rajhi and Dirk von Zitzewitz, driving a South African-built Toyota Hilux.

The Saudi driver suffered a small rollover’, and started Stage 4 with a four-hour penalty as a result. However, the Toyota Hilux crew dug deep and set the fastest time over the 400 km-long stage, which saw the rally leave behind the Caspian town of Kenderly, and finish in the city of Aktau.

Al Rajhi/Von Zitzewitz posted a time of 3:45:53 on Stage 4, besting MINI’s Stephane and wife Andrea Peterhansel by three minutes. Jakub Przygonski and Timo Gottschalk, in another MINI, went third-fastest on the stage.

Toyota Gazoo Racing SA’s Bernhard ten Brinke and navigator Tom Colsoul posted the fourth-fastest time, 1:27 slower than Przygonksi/Gottschalk ahead of them, but over two minutes faster than teammates Nasser Al Attiyah and Mathieu Baumel, who posted only the fifth-fastest time.

“We were the first car on the road, so we decided to take it a little bit easier just to be safe,” said Al Attiyah after arriving in Aktau. “Bernhard came past us at one point, but then we caught up with him again in the dunes. In the end I’m happy with our performance today, and we’ll have a much better road position for Stage 5.”

Neither of the two Toyota Gazoo Racing SA crews reported any issues on Stage 4, which was the second-longest of the event. Both cars ran like clockwork, and neither crew suffered any punctures – testimony to the toughness and reliability of the Toyota Hilux.

After four of the rally’s six stages, Al Attiya/Baumel still lead by the best part of nine minutes; while Ten Brinke/Colsoul now find themselves exactly one minute behind the MINI of Przygonski/Gottschalk. There is a healthy margin of 25 minutes to the Peterhansels (MINI) in fourth place, so the Toyota Gazoo Racing SA crew have no real threat from behind, and can focus on the car ahead of them.

Thanks to their finishing positions on Stage 4, the two Toyota Gazoo Racing SA crews will be the 4th and 5th cars on the road for Stage 5 – an ideal position from which to attack, on the 290 km-long stage, which will start and end in the city of Aktau, and includes a liaison of 162 km.

The rally draws to a close in the city of Aktau tomorrow, Saturday June 1, after six racing stages that will cover 1,872 km of stage racing, and 665 km of liaisons. Only one round remains in the 2019 FIA World Cup for Cross-Country Rallies – the Rally of Morocco will take place in early October, and will be the deciding race in this year’s championship.