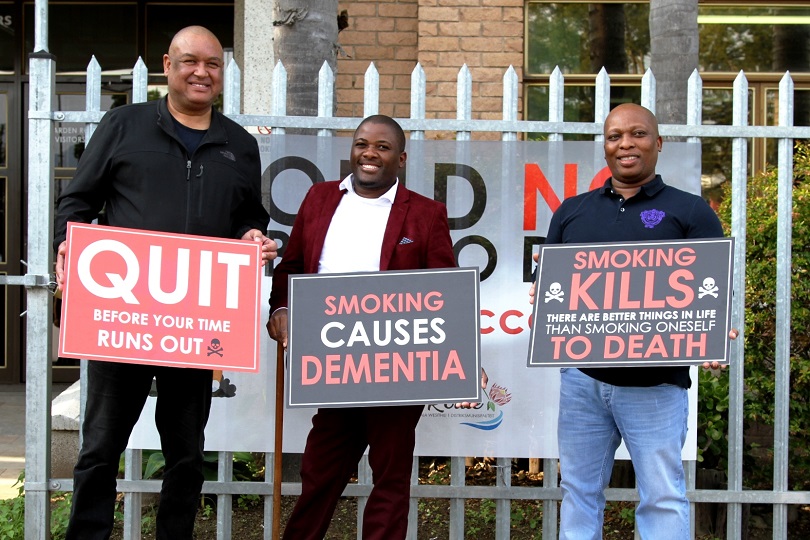 Councillors, management and staff of the Garden Route District Municipality (GRDM), in collaboration with other stakeholders, on Friday 31 May 2019, launched a World No Tobacco Day campaign in front of the GRDM head-office in George.

The launch took place in support of this worldwide initiative which, according to the World Health Organisation (WHO), focuses is on “tobacco and lung health.” According to the WHO, the world-wide campaign increases awareness on the negative impact that tobacco has on the lung health of people, from cancer to chronic respiratory diseases and the fundamental role lungs play for the health, as well as overall well-being of all people. The campaign also serves as a call-to-action; the advocating for effective policies to reduce tobacco consumption; and to engage stakeholders across multiple sectors in the fight for a tobacco free world.

During his keynote address at the launch, Portfolio Councillor for Community Services, Cllr Khayalethu Lose, gave a brief history of the campaign and added that if indeed, 44 000 South Africans die annually from tobacco consumption. This is more reason why this day must be well commemorated, especially because it brings with it knowledge of harmful effects of tobacco use.  In pledging his support on behalf of the GRDM, he highlighted:  “Let us make this World No Tobacco Day more meaningful”.

As part of the well-being of representatives, stakeholders such as the Cancer Association of South Africa and the Western Cape Department of Health exhibited health-related services in front of the head office between from 10:00 to 12:00, for staff to do health-related screening tests. While the activities were in progress, a burning minibus arrived at the venue, which caught fire due to smoking activities inside the vehicle. This caught the attention of the audience, when the GRDM firefighters had to contain the fire inside the vehicle.  Although this was merely an example of the dangers of fires inside a vehicle, it was indeed a much-needed demonstration to all staff present.

Soon after the activities of the launch, GRDM Environmental Health Practitioners (initiators of the event) and stakeholders started with a “silent march” from York Street, through the town of George to display messages to educate the public about the health effects of tobacco consumption. On such message is:  “Quit before your time runs out”.

If all members of the community are willing to stay abreast of these short and powerful educational messages in their daily lives, then, according to Cllr Lose and all councillors, management and staff who attended the launch: “Together we can live in a tobacco-free world”.