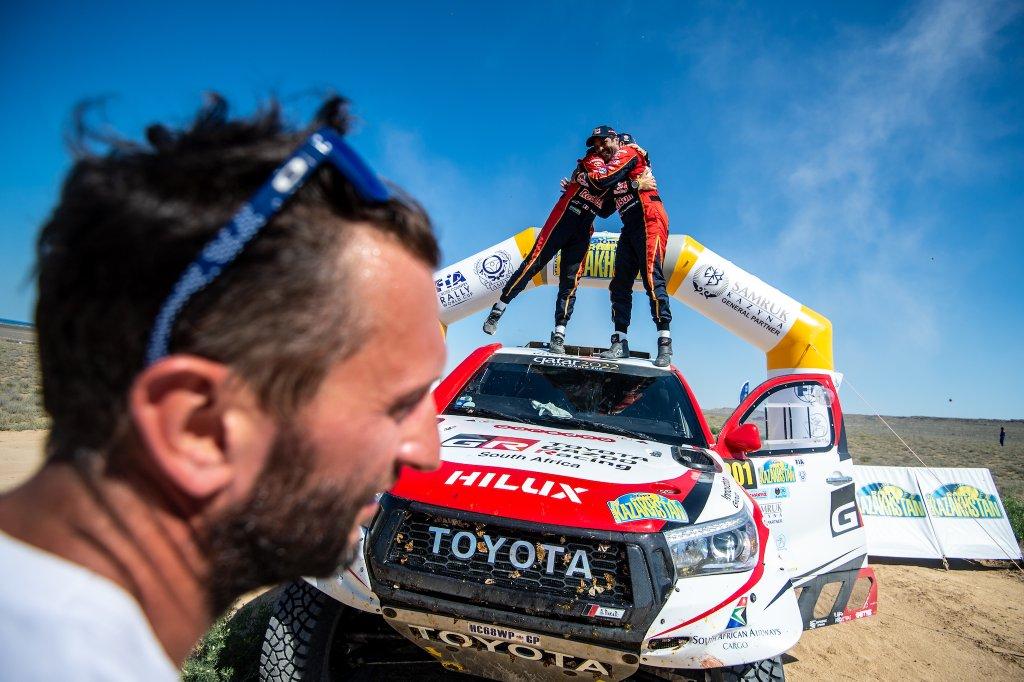 Brian Joss – It was a hard-fought race, but in the end Toyota Gazoo Racing SA’s Nasser Al Attiyah (Qatar) and navigator Mathieu Baumel (France) took the honours in Kazakhstan. The Toyota Hilux crew finished 5:21 ahead of MINI’s Stephane Peterhansel and his wife Andrea; and nearly 48 minutes clear of Jakub Przygonski and Timo Gottschalk (MINI) in third.

“We really had to work hard this time,” said a clearly relieved Al Attiyah after bringing his South African-built Toyota Hilux home safely. “After the scare on Stage 5, where we lost a lot of time, we couldn’t afford any mistakes on the final stage. But the car ran well, Mathieu was superb with the navigation, and we managed to keep our lead over Stephane to the end.”

This was a second victory in Kazakhstan for Al Attiyah, but this year’s spoils puts him and Baumel clear in the lead of the FIA’s World Cup for Cross-Country Rallies, with just the Rally of Morocco to come. That race is scheduled for early October, and even though Peterhansel is still theoretically able to spoil the Toyota Gazoo Racing SA party, the points from Kazakhstan swings the championship in Al Attiyah/Baumel’s favour.

“That’s the way it goes in cross-country racing,” said Toyota Gazoo Racing SA Team Principal, Glyn Hall, after the event. “Yazeed was fast enough that he could have won the race, had he not had that small rollover. And Bernhard was simply flying most of the time. We could’ve had a podium lock-out, but it wasn’t to be.”

Next up for Toyota Gazoo Racing SA is the Silk Way Rally, which takes place from 6 to 16 July, 2019. This will be the 9th edition of the spectacular race, and this year’s route stretches from Irkutsk in central Russia, through Mongolia and into China, where the race will finish at the city of Dunhuang. Over the years, the Silk Way Rally has grown into a monstrous test of man and machine, with a large variety of terrain types and surfaces making up the route.

“There isn’t enough time to bring the cars that just completed Rally Kazakhstan home before the Silk Way Rally,” explains Hall. “So, we are leaving some of our crew abroad to help prepare the cars for the upcoming race. At the same time, we have to prepare cars for Giniel and Henk to take on the Toyota 1,000 Desert Race later this month, so plenty of pressure at the moment.”

Both Al Attiyah/Baumel and Ten Brinke/Colsoul will be in action at the Silk Way Rally.