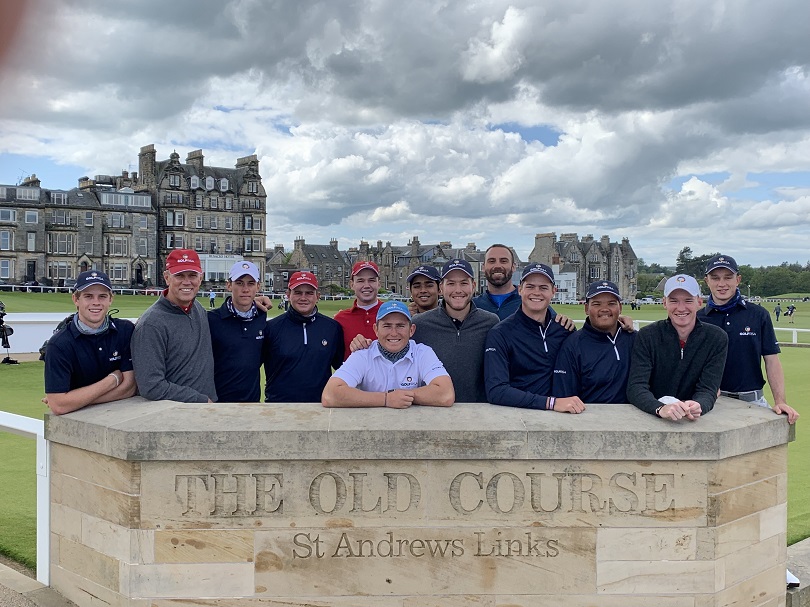 Vorster has been in imperious form this season, adding to victories in the Sanlam Cape Province Open and Western Province Amateur Match Play in his native South Africa with a senior international breakthrough in the East of Ireland Amateur Open a fortnight ago.

The purple patch elevated Vorster to 194th in the world amateur golf rankings and his performance at the Home of Golf will further boost the Louis Oosthuizen Junior Golf Academy member when the rankings are updated later this week.

“Every amateur I know of dreams of playing the Old Course at St Andrews, and I am incredibly grateful to GolfRSA for making my dream come true. I had goose bumps every time I stood on the first tee or walked over the Swilken Brigdge.”

“I bogeyed the par five fifth in the final round, but countered with a birdie at the short 11th and birdied the closing hole for a final round 71 to finish on 11-under 277,” said the Pinnacle Point golfer.

“The pin was just above the Valley of Sin. My drive pitched just left of the pin and rolled on a bit and then slowly trickled back down into the valley. I hit a great first putt to a foot and tapped in for birdie and it was quite special to have all the spectators watching me putt out.

“My best shot of the tournament was probably at the 11th hole in round two. The pin was tucked right into the left corner and I had 150 metres flag. I hit a chip 6-iron with a small draw to three metres right of the flag and boxed the birdie putt.

“The last two weeks has been a major step up for me from the junior circuit. I think the biggest takeaway from the GolfRSA National Squad Tour was learning to handle pressure on the big stage and to play golf at the highest amateur level. You could judge the quality of the field this week at St Andrews with the cut that fell at four-under. It was without a doubt the most competitive golf tournament I’ve ever played in.

“The other thing I really enjoyed was travelling with the other squad members and the camaraderie we developed.

“The support among the team-mates is awesome. It was so great to have the guys supporting me in Ireland and again on Sunday, coming out to walk with myself and Luca. Matt (Saulez) caddied for Luca on Sunday, but I wanted to push my own trolley. Wilco (Nienaber) took my bag for the last nine holes and that was pretty special.”

“Sam, Casey and I have taken a lot on board on the tour and we’re looking forward to the Junior Golf World Cup next week,” he said. “I believe we have a great team culture and the depth and talent to do really well this year.”

He won the South African Amateur qualifier and Northern Cape Open, reeled in five top 10s and has not missed a cut in over 10 starts.

“I was really pleased to improve almost 20 places on my tie for 40th last year,” said Filippi, who tied for 33rd in the English Men’s Open Amateur Championship two weeks ago.

“Unfortunately I let myself down with a couple of three-putts coming down the home stretch in the windy conditions, but making the cut in two very competitive events has boosted my self-belief.”

Filippi travels to Ireland next for the 124th playing of the Amateur Championship at the Portmarnock and Island Courses from 17-22 June alongside fellow Ernie Els and Fancourt Foundation member Therion Nel, number one ranked Jayden Schaper, Matt Saulez, Christiaan Burke, junior pair Jordan Duminy and Yurav Premlall and Wilco Nienaber, who last year became the first South African to win the qualifying round since its inception in 1983.

“Irrespective of results, it’s been a great tour so far for everyone on the squad in terms of gaining experience and we are all excited to start the next challenge,” Filippi said.