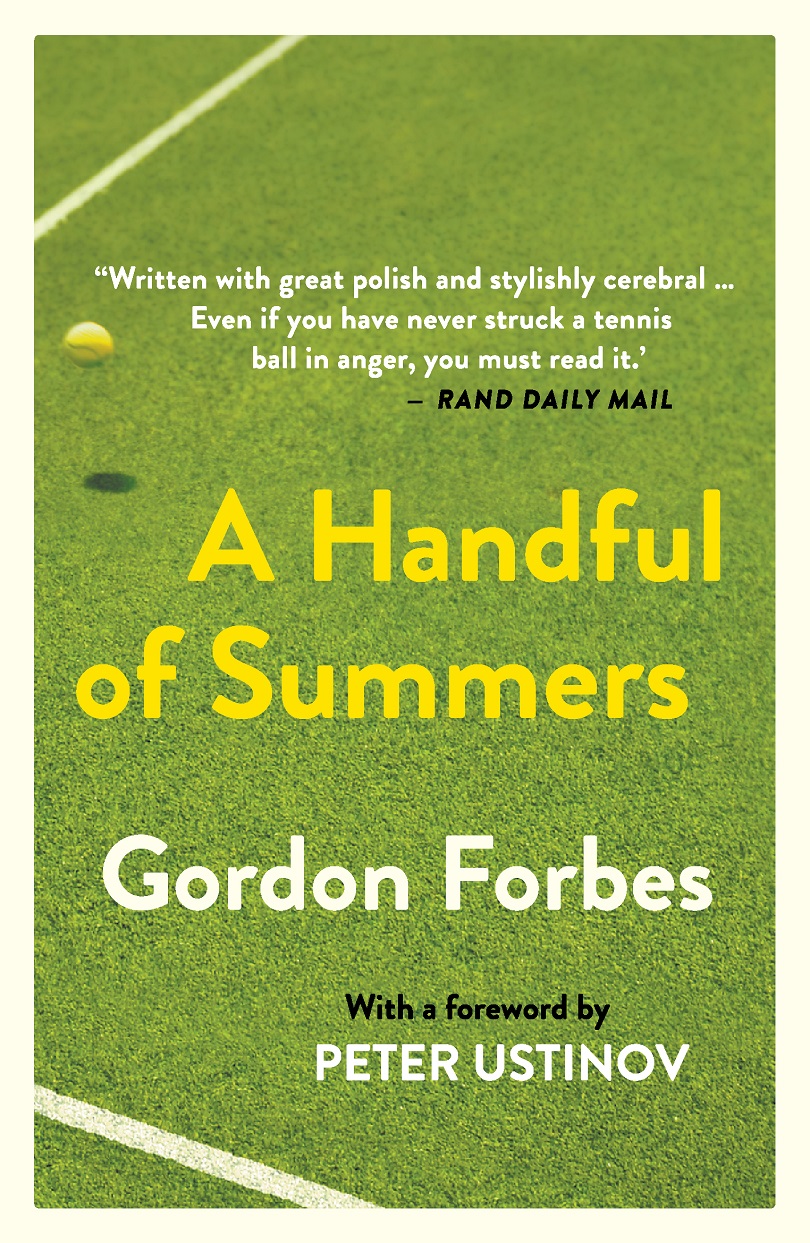 While  the French Open at Roland Garros is a memory and with Wimbledon starting on July 1 now is a good time to revisit a classic – A  Handful of Summers by Gordon Forbes, one of South Africa’s best known tennis players and which has recently been reprinted. It was published in 1978, 1979, 2010 and by Bookstorm in 2017. Forbes writes in his introduction that the book covers the period in which tennis changed from a simple, amateur game to the colourful spectacle that it is today. But he forgot to add that the players who perform on the world’s tennis stage, are for the most part, colourless, I believe. Although there are a few exceptions. The nature of the game has changed because of the element of professionalism. The players are focused on the pot of gold at the end of the rainbow. And who can blame them: it’s a big prize for men and women.

Forbes grew up on an Eastern Cape farm with his sisters Jenny, Jeannie, both excellent tennis players,  and his brother Jack. Jeannie later married the debonair tennis star, Cliff Drysdale. Forbes,  in his own inimitable way recalls many incidents: how he and Jack,  took a Black Eagle’s egg from its eyrie by tying Joseph, one of the little black farm boys, to a rope and lowering him down the cliffside to snatch the prize specimen to add to their collection.

When they did something bad like forgetting to close the shed gates to prevent the cows from getting in to the vegetable patch or taking a loaded gun in to the house they were made to play tennis on gravel courts for hours on end, as punishment.

Forbes’s tennis talents took him around the world, first to Europe as a member of the South African Davis Cup team and then to Wimbledon. There were also compulsory tennis sessions and, once, when Forbes was asked why he became a tennis player, he replied: “If you are forced to stand on a tennis court for hours on end you might as well practise.” And so they did. Their father used to regale them with stories about the great names of the day: Alice Marble, Donald Budge, Ken Rosewall, Lew Hoad and Fred Perry. He would also make up names including the fearsome Kukuljevic who developed the “Kukuljevic Twist” and the next day they were out early to perfect it.

Forbes first met the larger than life Abe Segal at trials for the South African Davis Cup team and in the Ellis Park change rooms, Segal greeted him with a roar: “Christ kid, you’re like a mouse! Don’t people make noises on that farm of yours.” And so started a lifelong tennis partnership. What happens on the tennis circuit doesn’t necessarily stay on the tennis circuit and Forbes will regale with you with the escapades of some of the greatest players the world has known. It’s not only the men who feature but the women too: Virginia Wade, Billie Jean King, Margaret Court and Maria Bueno, among them, who, says Forbes, can bury lobs with the best of them.

At Wimbledon in 1977, Forbes reflects on the future of tennis and how it has changed “Come into money, and gone public. One walks about in the players’ restaurant, waiting to get tea, and hearing things like ‘contracts, franchises and 12.5 million by May’.” And in a discussion with another former tennis great, Ulrich tells Forbes, “What really is tennis? Only a game, you see. That is all it really is. Only a game.”

The black and white images recall the heydays of tennis, when it was still an “amateurs” game.

If you haven’t yet read A Handful of Summers, now is your chance to see why it became a classic.

In case you don’t know, Forbes with Segal, feature among the best doubles combinations in the world: they won 10 national titles, reaching the French Open doubles final and the doubles semi-final at Wimbledon.