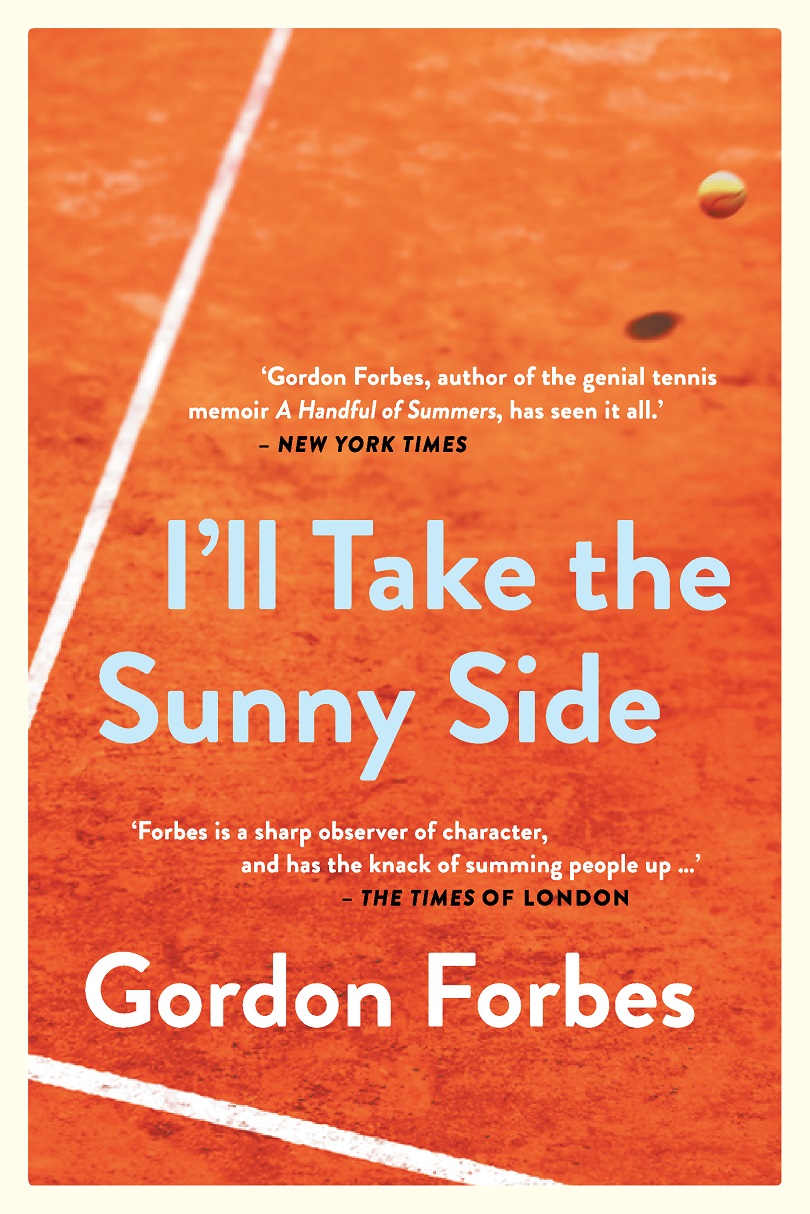 The Johannesburg Country Club has an old-worldly elegance and timeless air about it and is the setting for the eight men who lunch and once a month they meet to eat, drink and discuss everything under the sun, but mainly about yesterday’s international tennis circuit where Forbes and his larger-than-life tennis partner, Abe Segal, were giants on the courts. It’s a whimsical and quirky look at politics, sport, tennis especially, getting old and the fact that oysters are no longer available at the club’s renowned buffet table. They also have a lot to say about the unseemly noises women tennis players make.

Gordon Forbes regales his lunch partners with tales of Abe Segal’s exploits, both on and off the courts.  A few of them are about his escapades abroad with a journeyman tennis player, Garner Anthony whom Segal befriended years ago at Wimbledon. After Garner’s first wife died he married a billionaire heiress and he kept sending his long-time friend air tickets to the most exotic destinations including to Alaska and Patagonia. Segal was also a talented artist, and had an exhibition at  Read’s Gallery in Johannesburg. However, there was something odd about his work. At one of his exhibitions there were paintings with a lot of blue in them and his friends were worried that he was having a “blue period”.  But Segal dismissed the idea, and told his audience that the store where he bought his material was having a sale of blue.

“Forbesey” pays homage to Segal and his memories about his long-time partner’s final days are a poignant tribute. The last time he was with Segal, a friendship that ensured for 63 years,  was  at the Plettenberg Bay home of Tony and Gisela Bloom. They had a good laugh that night. “Abe went to see doctors in Cape Town and the tests they carried out didn’t bode well. So it was that his goodbye to me that evening in Plett turned out to be the last one. I can still hear his voice just before he got up to go to bed,” says Forbes who wrote Segal’s obituary which was published in the SA Jewish Times. Abe Segal died on April 4 2016, 61 years after pair met for the first time at Ellis Park change rooms at the trials for the Davis Cup.

Other conversations at the lunch table centre on the nature of sports writing and how in those far-off days journalists were proud of their craft and Forbes recalls that because it rained on the day the day of the release of his book, A Handful of Summers, in1978, The Times newspaper published a review on the back page by Rex Bellamy, who praised it to the hilt. Topics also included what boots to take on hiking trips; “survival kits” for travelling; friendships; girls and age; hugging and kissing and spitting on the sports fields; and game plans, especially the one Arthur Ashe made when he beat Jimmy Connors to take Wimbledon in 1975.

But always the conversation and banter goes down like smooth wine.

The guests at the lunch table are James, Charles, Tim, two Peters, Mark and Richard, all “literary types” and men of letters. James (Clarke) humourist, writer and editor; Charles (van Onselen), historian and author; Richard (Steyn), lawyer, former editor, now author of historical biographies, and the two Peters, newspapermen; Mark, a headmaster; and the late Tim (Couzens), writer and historian; not forgetting Gordon, who was likely the main attraction on the menu.

I’ll Take the Sunnyside is packed with hilarious stories (from Forbes) that will make you laugh out loud; sad events that will bring a lump to your chest, and a nostalgic look at a world long gone, written in the tennis great’s whimsical and quirky way. It’s the third chapter of his memoirs. The second one was It’s Too Soon To Panic (1995).