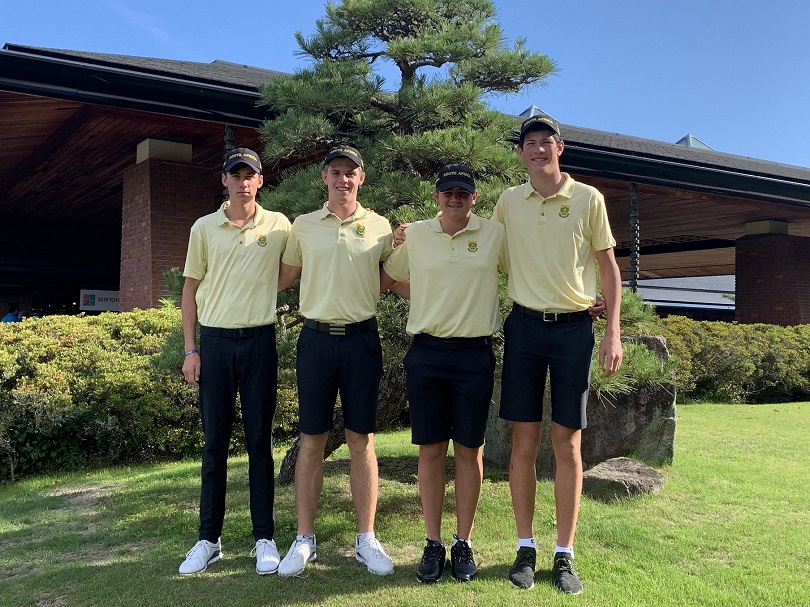 TOYOTA CITY, Japan (June 18, 2019) – Christo Lamprecht blitzed the Ishino Course at Chukyo Golf Club in 67 strokes to give the GolfRSA Boys Team a vital boost in Tuesday’s opening round of the 27th Toyota Junior Golf World Cup, supported by JAL.

Spain took pole position for a second successive year in the Boys Competition on nine-under 208.

Lamprecht’s four-under anchored the South African team and, supported by Sam Simpson (70), Casey Jarvis (71) and Martin Vorster (71), the GolfRSA Boys Team combined for five-under 204 to finish four shots adrift in a tie for second with Japan and the United States.

The GolfRSA Girls Team, however, were slow out of the blocks and will need to up the ante to make up a nine-shot deficit in the Girls Competition.

Isabella Fierro and Cory Lopez produced some fireworks late in the day to take Mexico to the top of the leaderboard on four-under 140. Sweden and the United States trail by three shots.

Gauteng golfer Kaiyuree Moodley set the pace for South Africa with a two-over 74, and rounds of 75 from Caitlyn Macnab and Kiera Floyd for a team total of five-over-par 149 left the GolfRSA Girls Team keeping Colombia company at the bottom of the standings.

Lamprecht’s 67 featured four birdies, an eagle at the par four 14th and a brace of bogeys. He finished one shot shy of Spain’s Albert Boneta, Abel Gallegos from Argentina and Sweden’s Gustav Andersson, who led the individual competition with rounds of 66.

“I got my introduction to this course last year, and 67 is a good score, especially since it wasn’t a great ball-striking round,” said former SA Amateur champion Lamprecht. “I put myself in some sticky spots, but I played strategically to minimize mistakes.

“I gave myself chances around the greens and capitalized where I could. My approach shots were spot on and the putter definitely saved me. I made a great up-and-down for birdie at the eighth and the ninth – the toughest par five – I laid up for two, chipped it close and boxed the birdie putt.

“I paid the price for an errant tee shot at 11. At 13, I found the bunker on the wrong side of the green and couldn’t up-and-down to save par. The 14th was definitely the highlight of my day. I drove the fairway bunker and holed out from a 100 metres. Two more good birdies at 16 and 18. All in, a pretty good round considering my struggles off the tees.”

Simpson from Western Province mixed two birdies and an eagle at the par five 16th with a trio of bogeys in his debut performance in Japan.

“The greens run smooth and incredibly fast, so my game plan was to try and hit as many fairways as possible and leave myself uphill putts,” said the 2019 Boland Amateur Stroke Play champion. “I’m not overjoyed with a 71, but it was great to make a contribution to the team in the first round. We’re not that far back. If we can bring it tomorrow, we can catch up to the leaders.”

The Spanish also laid claim to the girls’ individual lead, as Carla Tejedo birdied two of her last five holes for the three-under 69.

“I was striking the ball well, but I had a few wayward drives,” said Moodley, who tied for 12th after her opening 74. “The course is tough and it punishes mistakes. I made three silly bogeys that could have been avoided, but I was glad to pull it back with a birdie at the second. All three of us know we can do better and we are determined to get ourselves back into the challenge on Wednesday.”

The Toyota Junior Golf World Cup is the final destination of a process that begins with 73 national teams entered in regional qualifiers across six continents.
The boys’ field features 15 teams competing for the championship, while nine teams advanced to the girls’ finals.

The South African teams booked their berths with victory in the All-Africa Junior Golf Challenge, and a runner-up finish in Botswana also qualified Uganda for the first time. Dennis Asaba (73), Joel Basalaine (77), Ibrahim Aliga (83) and Micheal Alunga (83) combined for 20-over 233 in their debut in Japan.