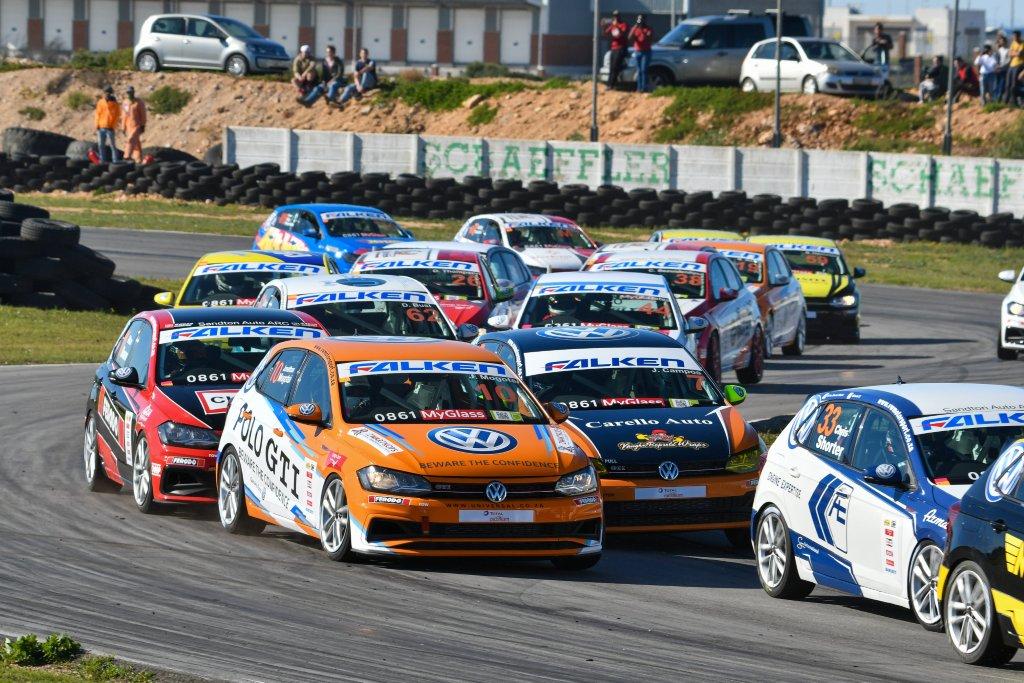 Brian Joss – Bradley Liebenberg could not have asked for a better weekend during Round 4 of the 2019 Falken Polo Cup at Port Elizabeth’s Aldo Scribante circuit.

The youngster qualified his Polo on pole position, then stormed to three consecutive race victories and collected extra points that come with setting a few fastest laps. He also managed to wipe defending champion and current points leader Jeffrey Kruger’s lead in the process. In fact, the two rivals are now tied on championship points.

It was clear that Liebenberg was going to be the man to beat from the very first practise session when he set the fastest time by quite a margin. In Falken Polo Cup racing, a comfortable margin is a relative term as most of the 25 car field can normally be covered by a blanket, especially around the relatively short Aldo Scribante circuit.

Liebenberg managed to carry his good form into the initial qualifying session by setting the fastest lap which he then converted into pole position following the superpole session in which the top six each gets one flying lap to determine the grid. Keegan Campos recorded the second fastest time just ahead of Capetonian Jurie Swart who seems to be driving with new vigour since winning a race at his hometrack a month ago. Chris Shorter put his Polo fourth on the grid ahead of defending champion and current points leader Jeffrey Kruger.

The best way to avoid trouble in a closely fought Falken Polo Cup race is to stay clear of the pack, which is exactly what Liebenberg managed to do in race 1. Kruger showed why he is the current champion as he carved his way though the field from fifth to finish second. Swart claimed the final podium spot ahead of Matt Shorter and the first of the Campos brothers in the form of Keegan.

Race two saw much of the same with the usual suspects fighting hard at the front of the field. This time Liebenberg had to work a little harder for his win as he first had to make a few passes after not having the best of starts. Swart and Matt Shorter initially put up a fight but after hitting the front there was nothing that anyone could do to stop Liebenberg. This time Shorter crossed the line in second ahead of Swart with Kruger trying his best to defend his points lead with a fourth.

At most race meetings that would have been the end of it, but the passionate Port Elizabeth crowd was treated to no less than three Falken Polo Cup Races. It meant more action for the fans, but for the drivers it provided a real opportunity to influence the championship standings and that’s exactly what Liebenberg did. The Johannesburg driver once again stormed off to take his third win on the day by a comfortable margin of over two seconds ahead of Jurie Swart who enjoyed a very consistent day. Kruger did his best to minimise the damage by crossing the line in third. When all the times were added to determine the overall standings it was no surprise that Liebenberg was declared the overall winner ahead of Jurie Swart and Jeffrey Kruger.

Keegan Campos claimed fourth with Dario Busi beating the Shorter brothers Chris and Matt to fifth. Volkswagen Motorsport’s own Jonathan Mogotsi, who won his maiden Polo Cup race here in Port Elizabeth two years ago had to settle for an eventual eighth overall.

Understandably so, Liebenberg was thrilled with his performance. “It was a great day behind the wheel and I couldn’t have asked for better,” he said shortly after claiming his third victory on the day. “I’m thrilled to have won three races but more important is the fact that we drew level with Jeff on championship points today. Jeff is a great champion and I’m looking forward to the fight during the second half of the season.”

Kruger is also looking forward to the challenge. “Bradley drove well today,” he said. “And now we head back to Zwartkops where I expect another tough fight with not only him but a few others too. It is going to be an exciting championship.”

Mike Rowe, head of Volkswagen Motorsport agreed: “As has become the norm, the Falken Polo Cup was once again the highlight of the entire race day with more than 20 identical cars with talented and determined drivers all fighting for victory. The fact that Bradley and Jeffrey are now tied on points is further proof and the second half of the season is going to be very exciting for not only the drivers but also for the fans.”

The second half of this fight will start at Zwartkops to the west of Pretoria at the end of July. Will Kruger return to his winning ways or will Liebenberg’s winning streak continue? Only time will tell.

CAPTION: Day at the races: all the action at Falken Polo Cup. Picture: Motorpress