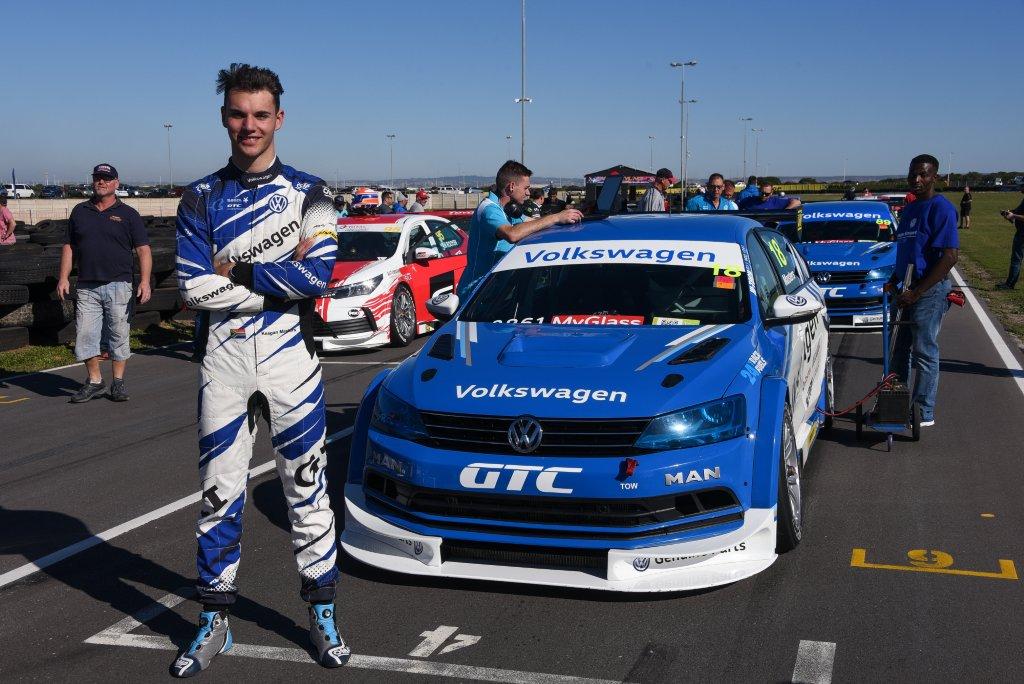 Brian Joss – It was a tough day at the races for the Volkswagen Motorsport team at Port Elizabeth’s Aldo Scribante circuit during Round 4 of the premier Global Touring Car (GTC) championship.

The team had high hopes of winning in front of their home crowd and although they didn’t manage a race victory Keagan Masters still topped the standings at the end of the day with Daniel Rowe claiming the points for third overall. The team’s dominance of the GTC 2 category continued with Bradley Liebenberg and Adrian Wood taking turns to claim victory.

The weekend started with lots of promise after the two Volkswagen Jettas of Rowe and Masters occupied positions near the top of the timesheets during the initial practice sessions. Qualifying however was less successful with Masters and Rowe managing the fourth and sixth fastest times respectively.

Times were still close as the difference between pole position and Rowe in sixth was less than nine tenths of a second so both knew that anything could happen during the two 12 lap races. In the GTC2 category, Bradley Liebenberg once again stamped his authority on the series by taking yet another pole position, more than half a second ahead of his nearest rival. Teammate Adrian Wood placed his Golf GTi in third on the GTC2 grid.

When the lights turned green, both Masters and Rowe were quick to make up some positions near the front of the field as they battled with their rivals in front of a passionate crowd. Daniel Rowe managed to get himself up into fourth place after a few laps, but the gap to a podium finish was just a little too big. Meanwhile, Masters fought his way through the field to climb up and into second place. With just a few laps to go, he set his sights on the leader and rapidly closed the gap until the laps ran out. In the end, the youngster had to settle for second, just 0.6 seconds behind the eventual winner. Behind the two Jettas it was business as usual for Liebenberg who stormed off to yet another victory, his sixth of the season while Wood rounded out the GTC2 podium with a third.

For the second race, organisers reverse the starting grid in order to add to the spectacle meaning that Masters would start the race from the last row with Daniel Rowe just in front of him. Unfortunately for both of them, this put them right in the middle of the battle where it is easy to get involved in racing incidents with a number of determined drivers often all aiming for the same piece of tarmac. Rowe lost out when contact between his Jetta and a fellow competitor dropped him down the order while Masters did his best to hang onto fourth when the flag was waved. After the times were added to determine the overall results, the name of Masters occupied second while Rowe ended up fourth on the day. The day’s initial winner however received a 20 second penalty for a technical infringement, elevating Masters and Rowe to first and third for the day respectively.

“As with any other race we came to Port Elizabeth to win, so it’s a little disappointing not to have achieved our goals today,” said Rowe after the second race. “But that’s the nature of motorsport and we’ll continue to take the fight to our competitors.” Masters was of a similar opinion. “I came very close to claiming my first GTC win in the first race,” said the young man. “And it was just not possible to come from the back of the field in race two. Even so, we’ll gladly take the championship points that we earned on the day and although we were lucky to inherent first, we’re already thinking about the next race which takes place at Zwartkops in July.”

“The goal is always to fight for victory,” said Mike Rowe, head of Volkswagen Motorsport. “Although we came close, we didn’t quite manage to reach our objectives today. Having said that, Volkswagen extended their lead on the points table for manufacturers while both Keagan and Daniel are very much still in the hunt for the drivers’ title as well,” he added.

In GTC 2, it was business as usual for the Golf GTi brigade, but this time it was Adrian Wood who managed to fend off a last lap attack from teammate Liebenberg by just two tenths of a second. “We had a great fight and it was wonderful to take a win,” said Wood after the day’s racing. With six victories from eight races in 2019, Liebenberg is the odds on favourite to win the GTC 2 title.

The Volkswagen Motorsport team will be in action at Zwartkops Raceway to the west of Pretoria on 27 July for Round 5 of the Global Touring Car Series.