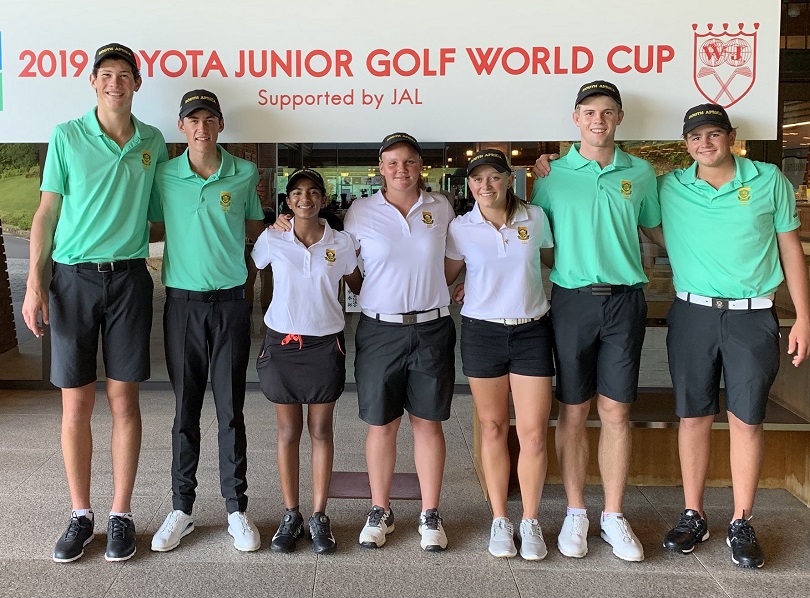 The GolfRSA Boys became the first team in more than a decade to break the 200 barrier when they posted a team total of 14-under-par 199 in Wednesday’s second round to take pole position at the Chukyo Golf Club.

South Africa leads the field on 19-under 407, with Spain one shot adrift and Japan third on 413.

“Just an amazing day,” said GolfRSA captain Eden Thompson. “Every player on the team made a huge contribution and we’ve put ourselves exactly where we want to be.”

Meanwhile the United States surged to the top of the Girls Competition standings with a six-under 138. They lead defending champions Japan by one shot on seven-under 281.

South Africa’s number one ranked Caitlyn Macnab and fellow Ekurhuleni junior Kiera Floyd both returned rounds of one-under 71 for a 142 total that lifted the GolfRSA Girls Team into eighth overall on three-over 293. Kaiyuree Moodley from Gauteng carded a non-counting 74.

Simpson from Western Province led the South African onslaught with a six-under-par 65.

The 2019 Boland Amateur Stroke Play champion played his last six holes on the Ishino Course in six-under, making up for an opening double bogey with the lowest round of the tournament.

The fourth member of the team Casey Jarvis made it four sub-70 rounds with a non-counting 69 and Thompson lauded his effort.

“Casey is still feeling under the weather, but he was a trooper, heading the team out and fighting to the last hole,” Thompson said. “He closed birdie, par, birdie, birdie for 69 and within the context of what the leading player does to filter great team unity and positivity, his contribution was huge. It took some persuading to get him off the course and out of the sun, as he desperately wanted to stay out there to support his team-mates.

“Unlike the first round, Christo’s ball-striking was fantastic today, but the putter stayed cold. He still posted a fantastic 68 that greatly boosted the team spirt and got us under the 200 mark.

“Sam blocked his first tee shot right and out of bounds, but he regrouped quickly and despite the double bogey start he rallied hard to turn one-over. He felt he was playing better than his score indicated and really just needed the putter to get going.”

The flat-stick caught fire as the Bellville golfer started the homeward loop.

Simpson birdied one and four, eagled the par five sixth and fired three birdies on the bounce from the seventh to close with a loop of seven-under 27. The 65 netted Simpson a share of fourth with Lamprecht on seven-under 135 in the Individual Competition. The South African pair sit three shots behind joint leaders Abel Caputo from Argentina and Sweden’s Gustav Andersson.

“I was playing catch up from the first hole after the double and I knew the team needed me with Casey so sick,” said the 16-year-old Simpson.

“I got to get it back to level with the birdie at the first and made a great clutch save for par at the third hole to keep the momentum going. You have to try and capitalise on the next three holes, and I played them well, hitting it stiff at four for birdie and making eagle at six.

“I was just trying to post a good number for the team and it ended up feeling like the putter was just swinging in my hands. To finish with three birdies in a row was really awesome. We’re all very proud of Casey, whose never-say-die attitude really fired us up. We’re in a good position now, but there is still a lot of work to be done.”

Vorster also got it going on the back nine and a hot closing stretch for 66 saw him climb nine spots to joint seventh on five-under in the Individual Competition.

“Martin birdied the first, but after that the putts wouldn’t drop. He had 12 straight pars, but stayed patient despite feeling that he wasn’t being rewarded for good ball striking,” said Thompson. “We had a chat walking down 11 and I asked him to stay patient and not look to technique as the culprit, but to rather try to get a feel. Although he still missed a few, he holed four birdie putts in the last five holes and was a much happier guy walking off the 18th.

“We have put ourselves in a good position midway through the tournament. However, with this format, we are still a long way from the finish line, so now it’s just a matter of keeping the form going and bearing up under the pressure.”