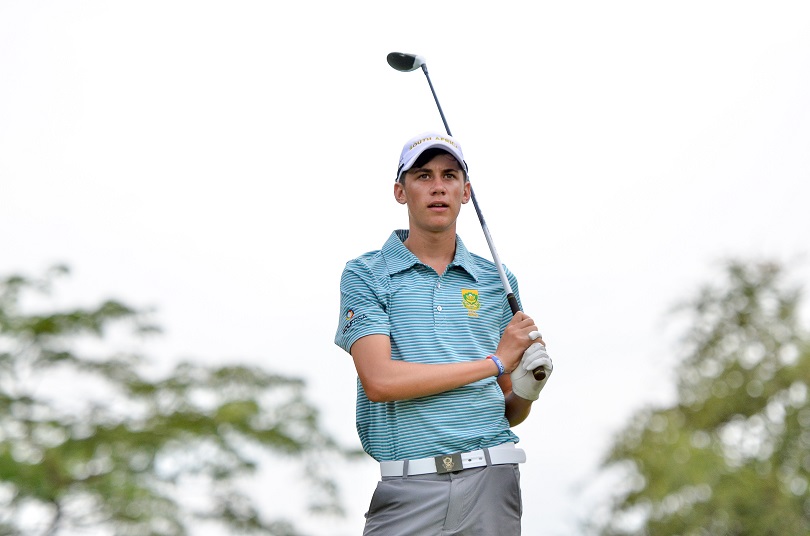 South Africa’s second round team total of 14-under 199 marked the first time in at least a dozen years that a team had posted a round under 200. On Thursday, the trio combined for a sublime 19-under-par 194.

Leading the Boys Competition on 38-under-par 601, South Africa has already bettered Denmark’s winning score a year ago by 15 strokes.

Meanwhile Japan also posted a sub-200 score to move into second spot, but the South African team felt pretty confident when they left the Ishino Course with a nine shot cushion.

“The boys played unbelievable,” said South African captain Eden Thompson. “They’ve done everything that we’ve asked them to do. We always reference about just managing the manageables and the rest will take care of itself and that’s exactly what they’ve done with each guy on the team playing to his own strengths.”

Sixteen-year-old Western Province golfer Simpson followed a second round 65 with a flawless 63 to reach the 54-hole checkpoint in the Individual Boys Competition at 15-under 198.

The reigning Boland Amateur Stroke Play champion opened up a three shot lead with a string of birdies and an eagle at the par five ninth. “I was really happy with the way I backed up yesterday’s round,” he said.

“I hit all 18 greens in the regulation but the putter was a bit unkind. The great thing was that I gave myself a lot of chances and I wasn’t even thinking about bogey. I had a really great mind-set. I hit a great drive down the first that settled the nerves. I lipped out for birdie, but then I went on a bit of a tear and made three in a row. From five to six the birdie putts just grazed the edge. I went for the green and went over. I hit a full swing flop-shot that came out great and rolled right up to the hole.”

Simpson tapped in for eagle to turn five-under and his confidence was high starting the back nine.

“I hit a wedge to 20 feet past, on 10 and just touched the putter and it went middle cup again for birdie,” said Simpson. “I gave every putt a chance on the back nine, but they just looked in. I hit one close on 13 and made birdie there and I hit the green in two on 16 green and two-putted for my last birdie.

“I’m really glad to catch form now after a disappointing run on the GolfRSA National Squad UK Tour. Martin brought his form and played great golf and we were all happy to see Casey go low, as sick as he is. It’s far from over, though. With 18 holes to go and three scores to count, anything can happen, so we’ll all just stick to our game plans and see if we can pull it through.”

Vorster, who holds the course record after a flawless 61 in the final round last year, shot a bogey-free 65. “Today, a couple of putts dropped,” said the Louis Oosthuizen Junior Golf Academy player.

“I holed a 10-footer for birdie at the third, and boxed a six-footer at the eighth. I made a great up-and-down for birdie at the ninth and on 10, I hit a great drive, lob-wedge to 10 foot and holed another one to four-under. My best putt of the day came at 12, where I holed from 20 metres.”

The reigning East of Ireland champion picked up one more shot at the par five 16th.

“I laid up after hitting a 3-wood through the fairway and chipped it to three foot,” said the 17-year-old from Mossel Bay. “It’s been a really day for the team and we’re all really excited to take the momentum to the final round. Every guy has made a contribution with week and the spirit in the camp is fantastic.”

Jarvis, who has been under the weather since the team arrived in Japan, was thrilled to contribute a five-under 66.

“I turned level and hit it to five foot at 11 and boxed it for birdie to go one-under,” said the 15-year-old State Mines golfer. “At the 12th, I hit it four foot and made the birdie putt and then I made three on the bounce from the 14th. I hit lob-wedge from 60 metres to a foot on 14, at the long par three I hit 7-iron to 15 feet and I had a two-putt for birdie at the par five.

“I was striking the ball well, but the putter was a bit cold. It felt great to put one on the scoreboard for the team and hopefully I can help the team again in the final round.”

The final member of the team and another Louis Oosthuizen Junior Golf Academy protégée Christo Lamprecht returned a non-counting 73.

Meanwhile the GolfRSA Girls Team maintained their steady rise and moved into seventh spot in the Girls Competition after posting a third round 145. Kiera Floyd from Ekurhuleni registered a level-par 72 and Kaiyuree Moodley from Gauteng carded 73. Caitlyn Macnab returned a non-counting 75.

The host nation carded 137 to top the leaderboard at seven-under 419, with the United States and Mexico trailing by three shots.

PHOTO – Sam Simpson from Western Province surged to the top in the Individual Competition with a flawless eight-under-par 63 in the third round of the Toyota Junior Golf World Cup, supported by JAL, at the Chukyo Golf Club in Japan; credit Ernest Blignault.