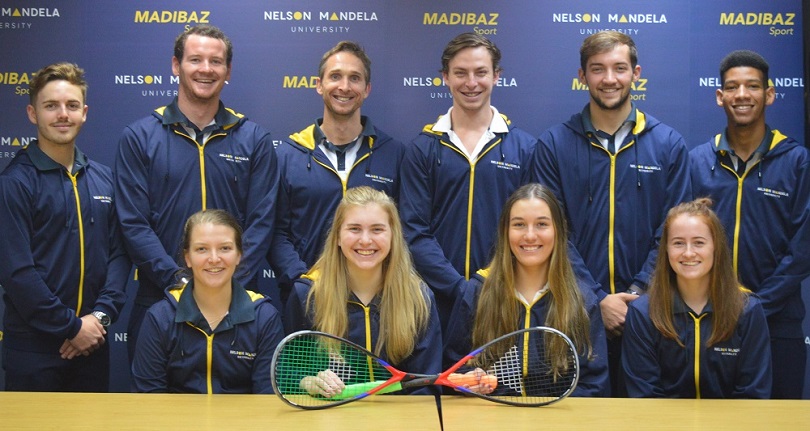 The Madibaz squash team are fired up for the challenge after ending as runners-up last year when they target the University Sport South Africa tournament title in Cape Town.

The event will be held at UCT from June 30 to July 5 and the Nelson Mandela University student-athletes will be going all out to unseat University of Johannesburg, the reigning champions.

Coach Jason le Roux said they were well aware of the tough task which lay ahead, but they were determined to produce their best in Cape Town.

“Of course we have our sights set on the overall title and we probably would be unhappy if we don’t make the top three,” he said.

“But having said that, we know that there are some really good sides at the week. The level of the tournament has improved over the years and it will be hard squash for six days.”

Madibaz have lost their No 1 from 2018, John Kuhn, who is continuing his forestry studies in New Zealand this year, but Le Roux feels they have a well-balanced side with good depth.

“Warren Bower has moved up to No 1 and Johan Thiel, who is really playing good squash, is at No 2 with Murray Schepers, who played No 1 for Tuks [University of Pretoria] last year, slotting in at three,” he said.

“Gershwin Forbes will be the men’s reserve player.”

He added that national university representative Hayley Ward would spearhead the women’s team, with strong back-up from Bianca Brown and Dani Shone. Micaela Boy is the reserve.

“The team event combines the men’s and women’s results and we have pretty good depth this time.”

Besides UJ, who have won the event seven years in a row, Le Roux said outfits like Tuks and North-West University from Potchefstroom had strong men’s teams.

“You also never know what UCT and Stellenbosch will bring to the week, but what is for certain is that we will put up a fight to try to cause an upset.”

Starting with the individual tournament from Sunday to Tuesday, Le Roux added it was an important platform for the players to make an impact.

“You can’t laugh off the individual [event], because you are ranked in the team event on how well your players do on the first three days,” he said.

“So that is important because you want to aim for the best ranking you can get going into the team competition from Wednesday to Friday.”

The players will be subject to about nine matches in five days and Le Roux said they had upped the intensity of their training sessions.

“Quite a few players were involved in leagues and tournaments, but now those are finished and we are concentrating on some longer sessions during training.

“The players are working hard because, as a team, they are very keen to cause an upset.”