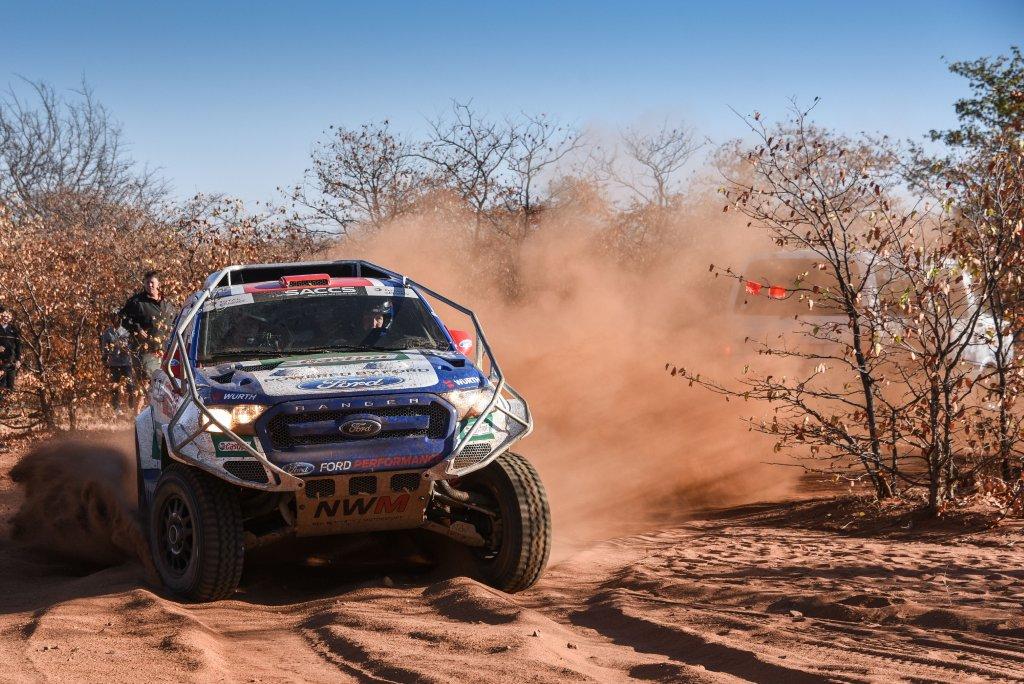 Brian Joss – Lance Woolridge and Ward Huxtable (T34)  extended their winning streak in Class T of the 2019 SA Cross Country Championship by topping both heats of the punishing three-day Toyota 1000 Botswana Desert Race held at a new venue in Selebi-Phikwe – in the process notching up their fourth consecutive win of the season.

With team-mates Gareth Woolridge and Boyd Dreyer (T77) wrapping up their weekend with two second-place finishes, it was a perfect outing for the Ford Castrol Cross Country squad as they secured a maximum double-points haul and extended their advantage at the top of the championship points table.

The two Neil Woolridge Motorsport (NWM) built and run Ford Rangers stamped their authority on the event from the outset, leading the charge during Friday’s 66km qualifying sprint with Lance and Ward holding a slender 3-second advantage over the second NWM Ranger.

The dense bushveld conditions and resulting slow average speeds saw the organisers cutting Saturday’s planned 200km loop east of Selebi-Phikwe down to 171km. The first loop included a bit of drama for the Class T race leaders, as they slid into a tree which crushed the exhaust, forcing them to complete the second half of the lap with significantly reduced power. And then 80km from the end, wire got wrapped around the rear axle and cut the brake line, which meant they had to limp back to the service park where the repairs were completed in the allocated 30 mins.

In the overall standings, this meant that Gareth and Boyd had taken over the lead at the halfway point after completing the first loop without incident.

However, the roles were reversed on the second outing as Lance and Ward enjoyed a faultless second lap, while Gareth and Boyd damaged a wheel on a rocky patch and lost around 13 minutes.

Nevertheless, the two Castrol-liveried Ford Rangers were in a class of their own, earning their places at the top of the Class T podium in the combined Friday and Saturday results for the first heat.

Sunday’s second heat took place on an entirely new loop east of the mining town, but was also reduced due to time constraints with the original 220km route cut to 189km. The Ford crews were once again in a different league to their rivals and landed up challenging the faster FIA class entries for position – while several of the top contenders faltered in the tight and unforgiving terrain.

Despite having to contend with endless dust from fellow competitors, both of the Ford crews ultimately produced epic, incident-free drives to snatch the top two places in the overall results for the second heat of the 2019 Botswana Desert Race – a remarkable performance from the lower-specification Class T machines.

When the dust eventually settled, reigning champions Lance and Ward had not only earned their fourth consecutive win of the 2019 season – further extending their Class T championship lead – but scored an outstanding third place overall for the 2019 Botswana Desert Race in the combined results for the entire weekend. Gareth and Boyd were no less impressive, racking up their third silver medal in Class T in as many races, as well as ending second overall for the day.

“This was an excellent weekend for the team, and winning overall today by beating the FIA cars was just the cherry on the top,” said team principal Neil Woolridge. “We built a new car for Lance at the start of the year and completed Gareth’s new car just two weeks before the Desert Race. To come to Botswana and have a trouble-free run with both Rangers in these tough conditions is really special.

“With four wins from four races, Lance and Ward are perfectly placed in the championship, but there are still three events to go and we can’t lose focus and let any of our rivals in the back door. As much as good luck comes your way, so does bad luck and we’ve had our fair share of that over the years.

But we have a good recipe with the team, and our cars are reliable and quick. The development work we’ve done this year is paying off and we’re showing that these Rangers are truly ‘Built Ford Tough,'” Neil added.

Ford was also rewarded with the Manufacturer’s Award for the second time this year, with three NWM-built Rangers occupying the entire Class T podium as Jacques van Tonder and Sammy Redelinghuys finished third.

“I’m very chuffed with our performance, having led qualifying, won both heats in Class T and topped the overall results today,” an elated Lance said. “We had a fantastic car beneath us, and all credit to the team for the exceptional work they have put into the Ranger.

“We had Gareth on our tail the entire race which meant we were pushing the whole time, but it’s a fantastic result and a great team effort.”

Gareth described the race as eventful, and one of the most demanding of his career: “The route wasn’t particularly rough but it was extremely tight through endless trees, which required maximum concentration the whole time.

If you ran wide you were guaranteed to slide into a tree, and if you cut the corner there was another tree to catch you out so we needed to be precise and near-perfect the whole time.

“We also had to endure thick dust throughout the race, as we caught cars ahead of us in qualifying, during yesterday’s race and again today but there was no way to get past them,” he said. “Add to that the winding route through the trees and it was very physically and mentally exhausting – but it turned out well in the end.”

The next race is the Bronkhorstspruit 400 in Gauteng on 2-3 August.