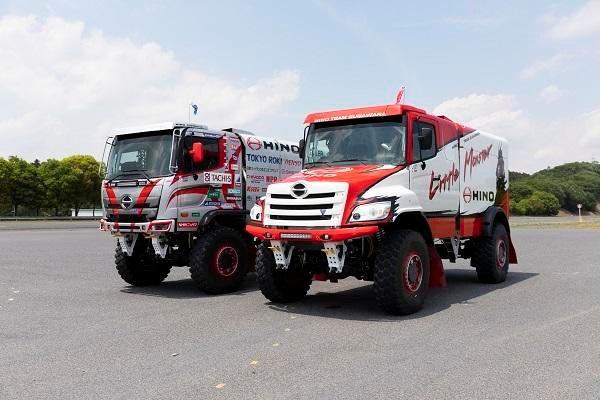 Brian Joss – Hino Team Sugawara, which has been a successful competitor in the Dakar Rally since 1992, setting up amazing records for reliability and consistency, has been restructured so as to improve its opportunities of getting into the leading group of trucks in upcoming races.

The team will be competing in the Silk Way Rally from July 6-16 in preparation for next year’s Dakar Rally, which will take place in Saudi Arabia.

Yoshimasa Sugawara, known as the Iron Man of Dakar after 36 starts and 29 finishes, including a record 20 consecutive finishes, has retired both as a driver and director of Hino Team Sugawara. He has been succeeded in the latter position by his son, Teruhito, also a very successful Dakar competitor. Hino Motors is taking a bigger interest in the racing team which now includes a dedicated chief engineer and officer in charge of engineering, who will have access to 70 other Hino employees in specialist positions.

Ikuo Hanawa, an experienced off-road racing driver, has joined the team to drive the second truck. The team also has a host of new members in terms of navigators, mechanics, and support crew, with 21 or them due to take part in the Silk Way Rally.

Besides further improving its already successful 500 Series racing truck, the team has developed a new truck based on the North America-exclusive Hino 600 Series with a bonnet-type cab. Teruhito Sugawara will drive the 500 model and Hanawa the American-type model in the Silk Way Rally which follows a route through Russia, Mongolia, and China over 10 days.

Both truck models are fitted with A09C-T1 6-cylinder inline turbo diesel engines of 9-litre displacement. The latest version of the engine develops 750 horsepower at 2 600 r/min. Both trucks are four-wheel drive. The 500 model will continue to use a 6-speed manual transmission, while the 600 model is fitted with a 6-speed torque converter automatic transmission. Both trucks carry 760 litres of fuel.

The truck frames are now of box section to make them even more rigid and a cab suspension system that covers both lateral and vertical movement has been developed to reduce crew fatigue.

Both trucks will have three seats to carry an additional team member who will have extensive technical experience to deal with any problems that may arise. Hino has traditionally relied on two-person crews in the past.

Too late to book your December holiday?

Freight and transport index returns its best quarter yet , but …

Pride Month: Ford focuses on diversity in the workplace