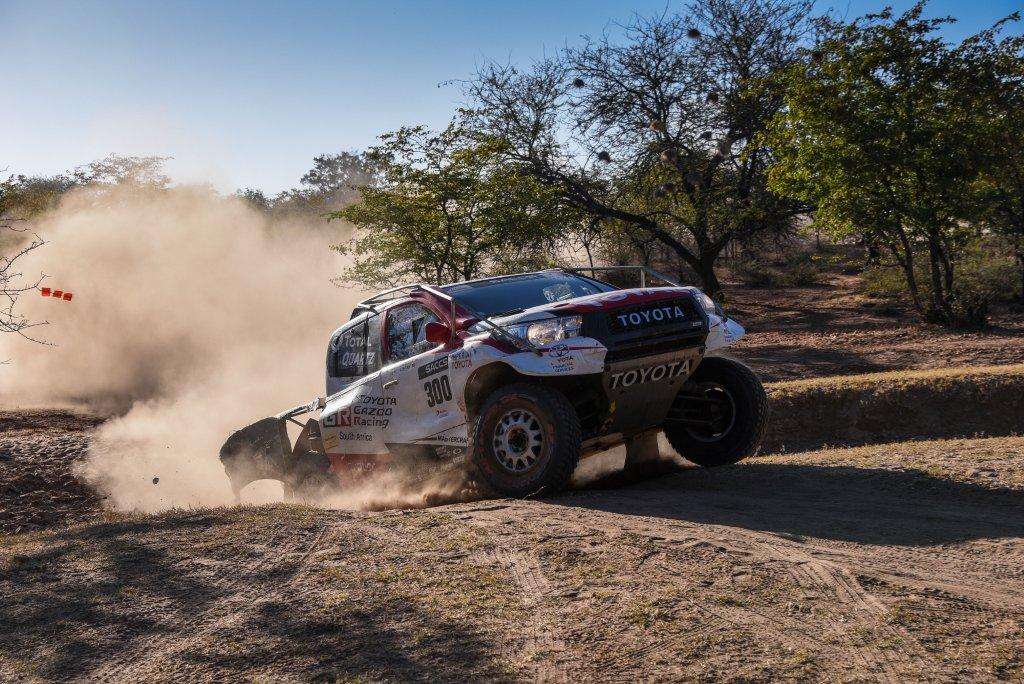 Brian Joss – The 2019 Toyota 1000 Desert Race will long be remembered as one of the toughest on record, thanks partly to the move to the area around Selebi-Phikwe, in eastern Botswana, which played a key roll in the outcome of the race.

In the end it was Chris Visser and navigator Phillip Herselman who took the honours in their Class FIA Toyota Hilux, supported by Atlas Copco.

At the same time, Toyota Gazoo Racing SA’s Guy Botterill and stand-in navigator Schalk van Heerden were in action at Round 3 of the 2019 SA National Rally Championship, where Botterill took the honours for the third time this year. Their Class R2N Toyota Etios never missed a beat, and the pair romped to victory with a margin of more than forty seconds to the second-placed crew, at the 2019 King Price Rally.

“We were very pleased with the way this weekend’s race went,” said an ecstatic Botterill after bringing his trusty steed home in first place. “The car ran well, Schalk did a great job on the notes, and I couldn’t be happier with the result.”

The same held true for Atlas Copco’s Chris Visser and navigator Phillip Herselman. The pair are no strangers to the winners’ podium, but winning the tough 2019 Desert Race was a highlight for the Vryburg farmer: “What a race!

Everything just felt right, and even though we had our fair share of challenges along the way, we managed to stay out of trouble and bring the Toyota Hilux home in first place.”

Visser and Herselman were quick from the get-go, setting the fastest time in Friday’s qualifying race. They were kept honest, however, by the three factory Toyota Gazoo Racing SA crews of Henk Lategan/Brett Cummings, Giniel De Villiers/Dennis Murphy and Shameer Variawa/Juan Möhr, who occupied positions two to four after qualifying.

But things soon changed for two of the three Toyota Gazoo Racing SA crews, as first De Villiers/Murphy and then Lategan/Cummings fell foul to the tricky terrain in eastern Botswana, each hitting tree stumps and damaging their Toyota Hilux race cars as a result. De Villiers was the first to falter, losing more than an hour making roadside repairs during the first full race day’s second loop – this after setting the pace throughout the opening loop of the race.

“It was very disappointing for us,” said the former Dakar winner. “The car felt good, and we really pushed hard from the start. Unfortunately, we damaged the car after hitting a tree stump in sixth gear, and lost a lot of time repairing the car. Of course, we would’ve wanted to be on the podium, but the reality of racing is that you don’t always have things your way…”

A similar fate befell teammates Henk Lategan and Brett Cummings, but if anything, it hurt the youngsters even more than their more experienced teammates. Lategan was second-fastest in qualifying, and set a blistering pace on the opening day of the main event. By the time the dust settled over the Botswana bush after the first race day, Lategan/Cummings were sitting pretty at the top of the standings.

Lategan was in this exact position mid-way through the 2018 edition of the Toyota 1000 Desert Race, having one Day 1 of the event. But this time, things quickly fell apart on the final day: “We started okay, but suffered one puncture after the other early in the loop,” said a rueful Lategan.

“Eventually, we ran out of spare wheels, but Shameer stopped to give us one of his spares, which I’m very grateful for.”

But after changing the wheel, Lategan/Cummings found themselves in their teammates’ dust, and fell foul to a tree stump as a result. “It was a terrible end to a very promising race. We had won the first day’s race, and were still very much in contention for overall victory, until we ran into the tree stump.”

The pair spent more than one-and-a-half hours fixing their car, and eventually finished as the 14th Production Car across the line – with teammates De Villiers/Murphy going three spots better.

In the midst of all the mayhem, Variawa and Möhr kept their cool. The pair were fourth-fastest in qualifying, but never set a foot wrong throughout the race weekend. Midway through the final day, the pair found themselves in second place, with just Visser/Herselmal ahead of them. Keeping cool heads, they piloted their Toyota Hilux with aplomb, avoiding trouble and reaping the rewards for second place as a result.

“This was a great event for us,” said Variawa after reaching the DSP after the race. “It feels good to be in contention again, and we are very proud of what we’ve achieved this weekend.”

In the end, the overall podium consisted of Visser/Herselman; Variawa/Möhr; and Ford’s Lance Woolridge and navigator Ward Huxtable. The latter pairing also took victory in the fiercely contested Class T. The Class FIA podium was rounded out by Johan van Staden and Mike Lawrenson (Renault Duster).

Trouble for the lads from Malalane Toyota, Johan and Werner Horn, saw the brothers slip further behind Ford’s Woolridge/Huxtable in the championship standings. They’ll have to dig deep in order to make headway over the three remaining races in the season.