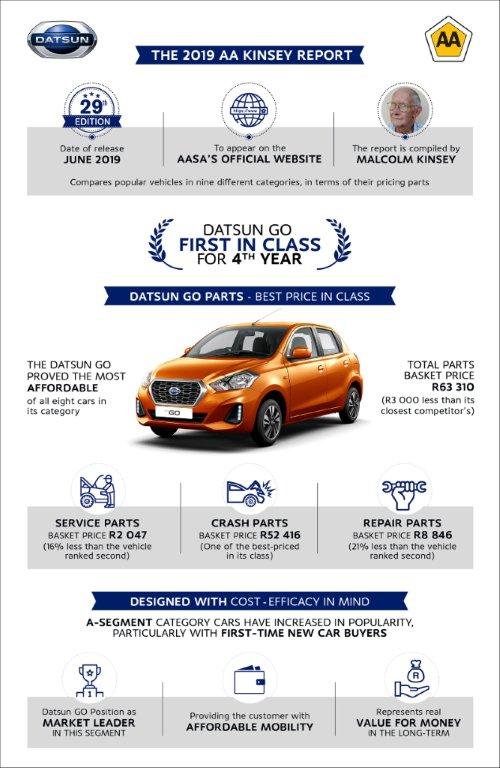 Brian Joss – The Datsun GO proved the most affordable of all eight cars in its category in terms of both service parts and repair parts.

The Datsun GO was also mentioned as one of the best-priced in its class in terms of crash parts, with a basket price of R52 416, according to annual Kinsey Report.

Volatility in the South African economy in recent years has had a real and marked impact on South Africans across the board. As a result, A-segment category cars have increased in popularity, particularly with first-time new car buyers. The Datsun GO was designed with cost-efficacy front of mind, as an offering to cater to this demand.

“The results of the 2019 AA Kinsey Report serve to further reinforce the Datsun GO’s position as a market leader in this segment as well as its reputation for providing the South African customer base with an offering that is not only affordable in terms of its selling price but also represents real value for money in the long-term,” says Kabelo Rabotho, marketing director for Datsun South Africa.

Released yesterday, Wednesday June 26, and now in its 29th year, what was previously known as the Kinsey Report has been relabeled the AA Kinsey Report, to appear on the AASA’s official website.

The report is compiled by veteran motoring journalist Malcolm Kinsey and compares popular vehicles in nine different categories, in terms of the price of their parts. This is further split according to the prices for parts needed during servicing, for repairs and as a result of crashes.

The 2019 edition features all Auto Trader Car of the Year 2019 finalists. A total of 72 different cars have been included. Twelve vehicles that were featured in the previous year’s report, have this year been omitted.

However, an additional 19 have been added. Most prices in this year’s report were obtained from dealers in the Durban, Pinetown and Umhlanga areas.