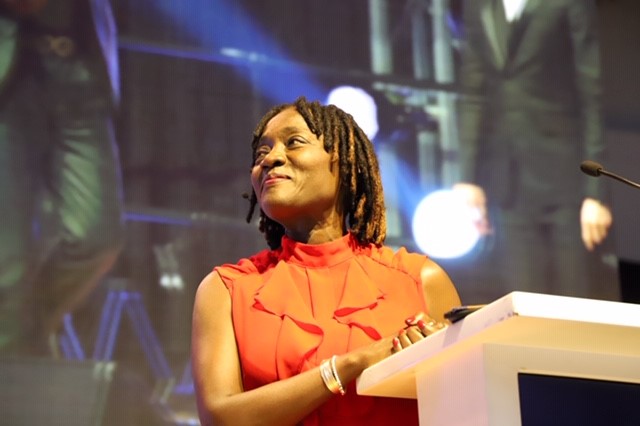 Stuttgart, June 2019. The Karatbars group and founder and CEO Dr Harald Seiz is thrilled to announce that the yearly conference at the CTICC in Cape Town was a resounding success with a total of 4,500 affilates attending from up to 100 different countries.

On the first day South African Mind Power Motivational Speaker Robin Banks gave a speech on “Success is a choice” followed by presentations and training done by Karatbars Corporate members.

The following day Dr Auma Obama, founder of the Sauti-Kuu Foundation opened the conference as the keynote speaker with her topic “Poverty is no excuse”, followed by presentations by the most successful leaders of Karatbars International from all over the world.

The event itself ended up with the recognition of the most successful affiliate partners of the company who received valuable gifts to honour their achievements.

Karatbars invited more than 1,200 successful affiliates to a four course Gala dinner where Dr Aubama spoke about her Sati-Kuu Foundation and its ultimate goal of empowering young people to become independent. F Paxton Fielies, the winner of the 13th episode of Idols South Africa then entertained guests.

Dr Harald Seiz and his team were also called up by their South African Leaders and honored for their work and support.  Taking this opportunity Dr Seiz spontaneously encouraged guests to support and donate towards the Sati-Kuu Foundation with a total of more than 100,000 USD being collected on the night.

This Mega Event was another successful milestone in the development of Karatbars International.

Karatbars International GmbH, with its headquarters in Stuttgart, was founded in 2011.  Dr Harald Seiz, the Founder and CEO is active worldwide and offers a variety of products around the real value gold and blockchain solutions. These include the distribution of small gold bars, cash gold – an alternative to classic currencies – and two crypto currencies, the Karatgold Coin and KaratCoinBank Coin. In October 2019 Karatbars will launch the Voice-Over-Blockchain Smartphone IMpulse K1-Phone, which offers extremely secure data transmission via blockchain and end-to-end encryption. Today, the company is the market leader in innovative gold products with an annual turnover of 100 million euros and over 600,000 affiliates in more than 120 countries.

Dr Obama on stage at the Karatbars Freedom Leadership Congress