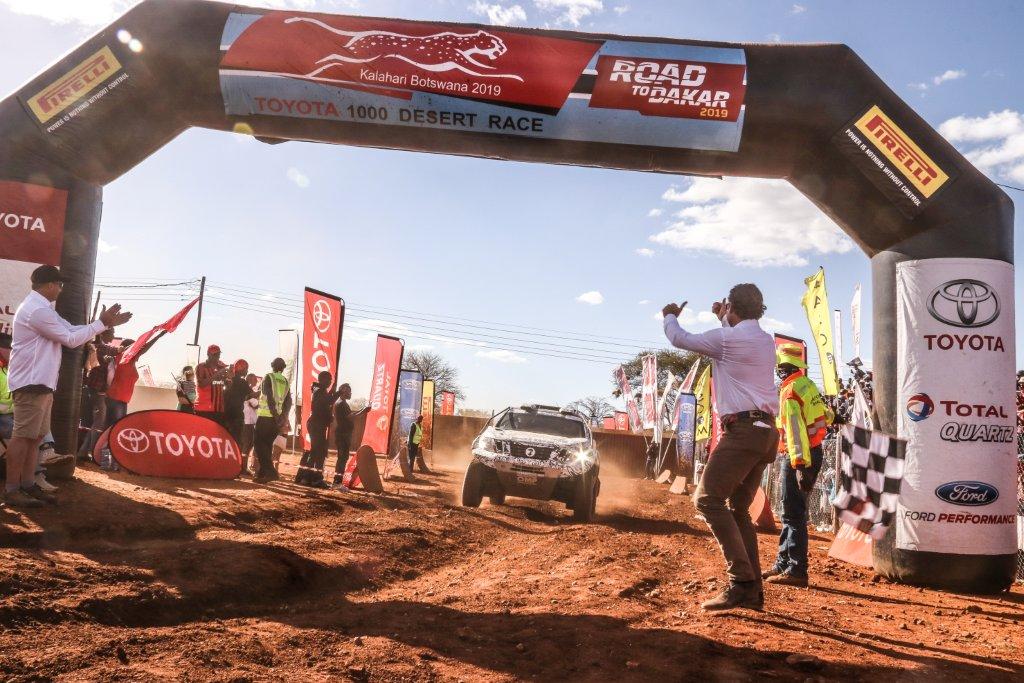 Brian Joss – Besides the Dakar, which has now taken on legendary status among the off-road racing fraternity, there is another equally epic event that appears annually.

The coveted TDR or Botswana Toyota Desert 1000. With the rest of the events on the domestic calendar boasting a still daunting 400km’s on their race distance, the 1000km is sometimes hard to even imagine. Spread over three days in the Botswana desert with a prologue on day 1 and over 400km’s of racing over each of the days two and three, this is a major test for both driver, navigator and vehicle alike.

For the last four seasons the TDR has been held in the sands around the mining town of Jwaneng but for 2019 running of the TDR moved to a new venue, Selebi Phikwe.  Less sand and more hard pack ground as well as dense bush and scrub were the order of this year’s event, offering new challenges to all who came to take on ‘The Desert’. For Schalk Burger and Elvene Vonk the Desert held some rough memories from the 2017 event where a roll over in the sand after another competitor had hit them from behind very nearly ended Schalk’s racing career. A severely crushed and damaged hand saw Schalk out of racing for well over a year and so the return to the desert meant the big man wanted to get his revenge on the event. Numerous surgeries and physio meant Schalk arrived at the beginning of this 2019 season fighting fit and by the time the desert came around he and navigator Elvene Vonk were back up to full speed.

A difficult prologue with set-up on the car not to their liking the pair could only manage a low 33rd in the 64km qualifying run. This saw them take off on the first of the racing days close to the back of the pack and with the tight nature of this year’s event, passing was going to be near to impossible in the dense bush and dust. This didn’t deter the pair though as they set off into the desert and by the halfway marker of day one were working their way up the order nicely. The desert also marked a qualifying race for the Dakar 2020 event and so the teams entered into the ‘Road to Dakar’ challenge were also trying to beat each other to get the win and with it, a free entry to Dakar.

Even though conditions weren’t to their liking, by the end of Day two in the desert the Schalk Burger Motorsport and King Price Xtreme pair had made the most of their early pace and continued to hold momentum through the day to end 7th overall with one day and just over 400km’s remaining. This also put them 5th in their class FIA and in the lead of the ‘Road to Dakar’ Challenge.

Small issues on the final day meant they were stuck in dust after having worked their way up through the field on the previous day, it looked like their charge had been halted.  The speed was still there but the 400km plus loop was in bad shape now and offered little in the form of traction and the dust by now was like driving into a solid brown wall. All teams were battling and by now the survival strategy had kicked in. All the team wanted at this stage was a solid finish and they got just that.

One of the best and most improved drives of the weekend moving the team from 33rd on prologue day to 7th at the end of day two and eventually it was a hard fought 10th overall at the end of the final day in the desert. This gave them an 8th in class FIA and an agonisingly close second place finish in the ‘Road to Dakar’ challenge.

Bronkhorstspruit is the next event on the SACCS calendar but Schalk and Elvene have bigger fish to fry as the second half of the season marks the beginning of the real training for Dakar 2020. From now on the deserts of Dubai and Namibia will be the scene of a lot of seat time and sand specific training for the pair. Some races will still be tackled though with the Kalahari Rally pushing the limits further still as the 7 stage, 3200km and 8 days will be the longest challenge before the final Dakar preparations come into play.