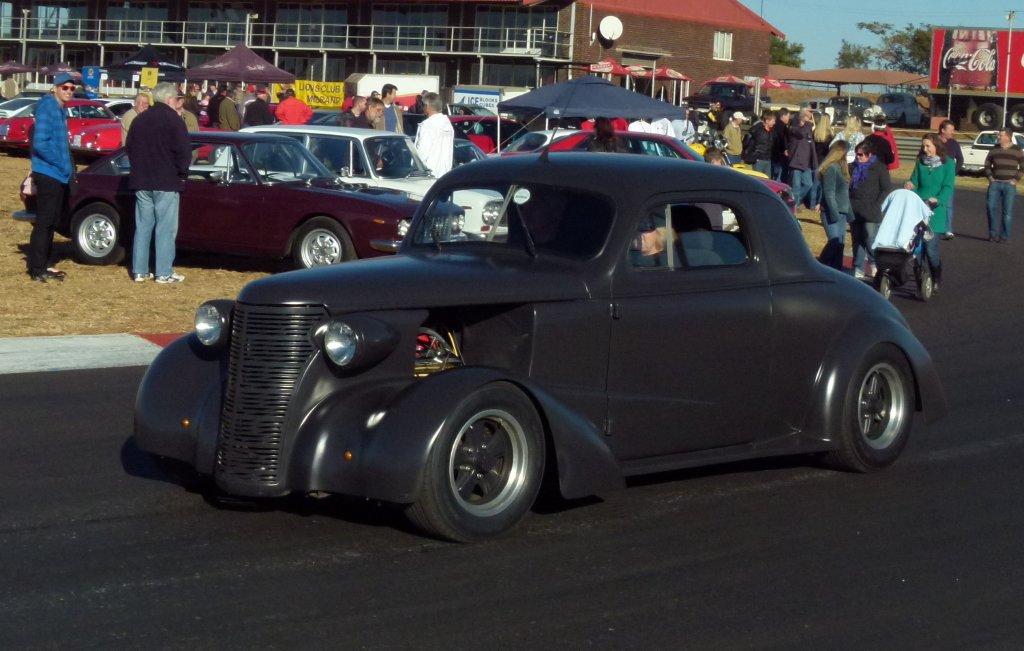 Brian Joss – One of the features of the Classic Car Show on July 7 at Nasrec Expo Centre will be the happy co-existence of hard core hot rods with original restored classic cars in the crisp winter Highveld air.

There was a time when adherents to these divergent schools of thought on old car preservation gave each other wide berth, but the organiser of the Classic Car Show, Paolo Calisto, feels that his annual event has done much to bridge the gap between the rodders and the purists.

“It’s all about passion at the end of the day,” says Calisto. “What these guys have found is an appreciation of each other’s art forms, if you can call it that. I think it’s the diversity of the cars on the fields and in the halls of Nasrec that makes our twice-yearly events unique.”

In former years, many old-car restorers felt that hot rodders destroyed the integrity of old cars that needed to be preserved in their original form, by installing wildly inappropriate V8 engines, modern braking and suspension systems and “out there” paintjobs.

Hot rodders, for their part, traditionally pointed out that they generally rescued old wrecks that were too far gone for a traditional restoration process back to original spec. What’s more, they point out, their modified cars are generally more easy to cope with modern traffic conditions than old cars that have been kept 100 % original.

The common denominator in creating a top class hot rod or restoring a classic to perfect originality is that both approaches require lots of work.

Hot rods that are done properly generally exhibit thousands of man hours in creating a perfect body finish, as well as a thorough re-engineering of the chassis to accept modern parts.

The classic approach involves, firstly, extensive research to ensure that appropriate parts such as trim and upholstery reflect the period-correct appearance of old cars when they were new. And re-creating an old-school paintjob and an interior, as well as rebuilding an engine to 100 % originality can take just as much work as radically changing an old car to give it a modern hot rodding theme.

Within the old car movement various sub-themes have also become popular in recent years. Many purists feel that if an old car found in a barn is still absolutely original in terms of all the parts that are present, it is best to leave the bodywork “as found” and concentrate only on getting the mechanical bits and pieces up to scratch. This approach sees the retention of that all-important patina that speaks of an old car’s history, and the tales it could tell over the years “if only it could speak.”

It is true that once the decision has been made to undertake a restoration on an old car, that factory-originality will be lost forever, no matter how good the restoration.

In the American muscle car movement, there is a different school of thought that is generally present. With many of the muscle cars you will see at Nasrec Expo Centre on July 7, the body and trim has been retained to 100 % original spec, but the cars have often been fitted with modern alloy wheels, lowered suspension and modern brakes. Engines too have often been “freshened up” to include modern V8s with fuel-injection and computerised engine management systems. This not only radically improves their performance, but makes them far easier to live with on a day-to-day basis. Suddenly starting problems and inexplicable losses of horsepower are a thing of the past!

The  European school of thought says there are different approaches too.

Cars of German, British, French or Italian manufacturer are generally left standard or close to standard, amongst classic enthusiasts. But there are various upgrades that are deemed “acceptable”, such as the fitting of period-correct alloy or wider wheels, and engines modified in a way that race and rally teams may have done thirty years ago or more.

The enthusiasts for air-cooled Volkswagens, however, seem to appreciate both classic and modern interpretations of old Beetles and Kombis in equal measure. The fact that so many old air-cooled VWs were sold in America led to so-called California-look interpretations of these VWs, and this includes the lowering of suspensions, fitting of period-look aftermarket wheels, and applying brighter paintjobs to give these cars a more upbeat look.

On the other hand, finding a perfectly-preserved Kombi or Beetle is an event that seems to be well appreciated by both classic adherents and Cal-look fans. If an old car is perfectly original, the thinking seems to go, it is almost sacrilegious to then turn it into a hot-rodded modern interpretation.

These  insights are meant to help visitors to The Classic Car Show, gain more of an appreciation of what’s what in the classic car arena in 2019 and what lies behind all the diverse interpretations of the hobby on display at Nasrec.

Load up the smartphones with data and Google the model you see to help you identify it, or speak to the owner, who will probably be giving his car a quick wipe-down.

Drivers of classic cars and one passenger will be admitted free, while extra passengers will have to pay the full entry fee.

of charge to the Classic Car Shown on July 7, 2019. Admission will be free for the driver and one passenger, while extra passengers will have to pay a full admission fee.

The Classic Car Show runs from 8 am to 4 pm. Classic car owners can gain access to the display area from 7am.

Admission prices are R60 for adults if the ticket is booked through Computicket, or R80 at the gate. Entry  for children under 12 will be R20.

As usual there will be a full programme of entertainment for the whole family.