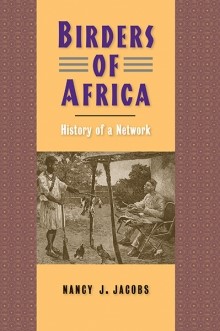 History of a Network

“Twitchers” are usually shown carrying binoculars slung over their shoulders, wearing funny hats, hiding in  trees, scrambling through forests and peering from behind bushes trying to spot that rare bird they can tick off their list. It’s a serious business, however, and this book is not only about birders, but about a network of people, including preparators, who have made a long-lasting contribution to ornithology in Africa.

Birding  did have a political effect on nature and the environment in which the ornithologists from beyond  Africa worked, and how, according to Thomas R. Dunlap, author of In The Field, Among Feathered, “How empire shaped science, recreation and individual lives”.

Twitcher is a relatively modern word which entered the lexicon in the 1950s and it refers to the twitchy behaviour of British birdwatcher Howard Medhurst, who often travelled long distances to see rare birds. It also has a negative connotation because twitchers are not serious about the hobby. They just want to tick off as many birds as possible on their bucket list.

In Birders of Africa, historian Jacobs, an associate professor in the history department at Brown University, challenges the accepted stereotypes and sheds new light on our feathered friends, ornithology in Africa, and of course, the people who work in that environment and who know that birds are much more than avians that chirp from the trees in our gardens.

Jacobs interviewed, among others, Matthews Mathabathe, a retired insect (beetle) preparator, working at the then Transvaal Museum, now the Ditsong National Museum of Natural History, in Pretoria.  Mathabate has some interesting takes on the insects. He told Jacobs, “Looking at it like a common thing. It is not good…There is a beetle which the bushman uses for arrows… one that bores holes … There is a beetle. Africans eat their eggs, there are beetles, they have work. Very appreciable things.” Mathabate taught himself scientific taxonomy. But there was an element of racism as the white scientists did not want to divulge their knowledge .”It’s how we say it’s what we stole.” Although his “mentor” , Charlie Koch, who encouraged his love for beetles rejected the idea of racism. There is a letter from Mathabate asking for an increase in salary. It was a reflection of how badly in those years black employees were treated. But Director Fitzsimmons gave him his raise after reading the eloquent letter.

Jali Makawa (1914-1995) was an extraordinary birder and no-one knew more than he did about flying, singing, and nesting birds in south central Africa where he was born, Jacobs writes. Makawa  first developed an interest in birds as a young boy in rural Mozambique and Malawi. As CW “Cob” Benson’s collector he learned to prepare their skins for their afterlife as specimens. Makawa’s 50 years as a birder received high praise from ornithologists including from Michael Stuart Irwin of Zimbabwe, who said if he was ever asked who knew his birds best in the field, his  answer would be Jali Makawa, who collaborated with scientists from Harvard, Yale and Cambridge Universities, but, says Jacobs, his expertise was in the bush not museums. Irwin, was with Makawa when he brought in the white-chested tinkerbird, Pogoniulus makawai, an extremely rare bird which no-one had seen before or since.  Two British ornithologists had several theories about the bird but it is an “extraordinary rarity”.

Saul Sithole (1908-1997) work as a preparator of birds at the Ditsong was also part of the birding network and even though he was the victim of racialisation of science, because he was black, although Austin Roberts noted that Sithole excelled at the work. Tamar Cassidy who worked with Sithole said that he had, “Artistic hands on his work”.

In the second half of the book, Lives of Birders, you can read about the ornithologists and their helpers who make up the network: Bengt Berg, a Swede ,who had only a secondary  interest in African breeding birds  and differed from today’s birders, who travel to add new species to their life’s lists. British bird watcher Cecily Ruggles–Brice used her English experience to try to understand  bird migration by interpreting it through 20th Century politics; Hans Couvenhove, a German Count, hardly interacted with the “natives” , he ate in isolation and recalls how a trogon took more interest in him than, ”in the native camp”.  British bird watcher Madeline Alston, who in her writings, include musings about the men who hosted her graciously or earned her ire. One of these was a mission-educated Lozi man who could do nothing right. The ” cook-boy” was afraid of water, bored in the boat, overdressed for the bush, and ignorant of birds”.

Others are George Latimer Bates who built a community of birders among the Bulu people , including women, in the Cameroon; Reginald Ernest Moreau was in the vanguard of an ornithological expedition in the 1920s and 1930s, but his work owed much to research assistants.  However, he referred to them as “local natives who were remarkably devoid of bush-craft”. Which is a puzzle, as  Jacobs points out, if he depended so much on research assistants, how could they be anything less than knowledgeable or skilful. Another was ornithologist Leslie Brown who asserted that they had their own position in Africa which became vulnerable through decolonisation. But he was also quite dependent on his assistants, among them Njeru Kicho, whom he regarded highly. However, Brown’s hunting grounds were the forests around Mt Kenya where the Mau-Mau held sway although the birder didn’t think they were much of a threat. African birders also reacted to the boundaries set by white birder s: Makawa worked his own patch beyond the border of ornithology; Kicho showed he was nobody’s henchman; while Sithole was not a vernacular birder, he was upset because he was excluded.
Vernacular birding is how different nations describe their own bird life. References to birds can carry specific markers of time and change and often refer to African folk lore, traditions and religion and to make points about human norms. The Hausa name for the red-billed firebird and the Fulfulde respectively are bawan-Alla and korgel-Allah, both mean Allah’s little slave. A South African schoolgirl explained that the orange-throated longclaw got its orange neck by “wiping Jesus’s blood”.  In South Africa the red-capped lark and the wailing cisticola signal dawn and sunset. Swallows building on the side of a Xhosa house are thought to bring luck, while in Mandingo villages in Gambia the Marabou stork is unmolested as it signals luck and peace.  Some birds herald a change of season: the white browed coucal which makes a sound like pouring rain (ubikwe in Xhosa and ufukwe in Zulu) has been given the name rain-bird. Owls bring ominous warnings, if it alights on a roof, it means someone will die. The white helmet shrike is associated with Islam in parts of West Africa and in Lesotho the hammerhead (hamerkop) is considered a powerful bird that you must greet respectfully. “ Grandmother Hamerkop, greetings unto you.” Birds also have medicinal attributes; a medicine made with swallows can prevent South Africa cattle from straying while the Khoisan believe that the feathers of swift birds are well suited to arrows,  and in South Africa and Zimbabwe the fish eagle and doves are beneficial to would be lovers. In Durban, 18 species of bird parts were seen at markets in the 1990s.  Which is one of the reasons why species have become vulnerable.  As Jacobs notes, “as long as birds are needed for health, people will continue killing them.

There are numerous black and white and full colour images that add lustre to this masterpiece of research and story-telling. A map will guide readers to major places, countries and ethnic groups highlighted in the book.

Nancy J. Jacobs has given us a bird’s eye-view of  history in Africa taking us into new and uncharted territory. Birders of Africa is an engrossing and enthralling read in easily accessible language.   It is a must read for people whose life’s work is ornithology or if you only have a fleeting interest in birds. It will show African history and its social and political environment in a new light.