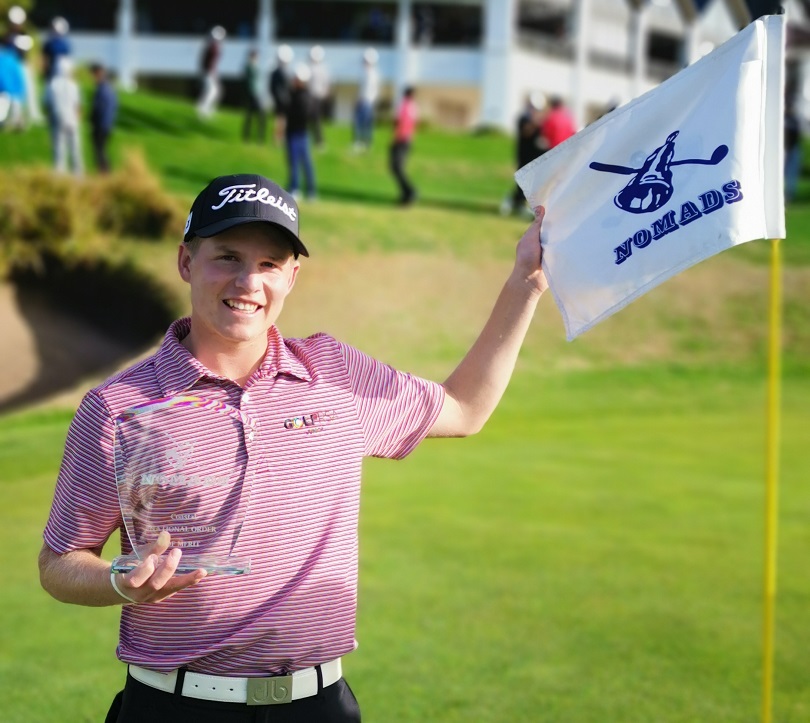 ST FRANCIS BAY, 28 June 2019 – Ben van Wyk got instant redemption with a two-shot triumph in the Nomads National Order of Merit Coastal at St Francis Links just days after faltering down the stretch while in contention in the Dimension Data Junior Open.

The reigning Nomads SA Boys U-19 Match Play champion posted the lowest junior score in the club’s history and equalled an amateur record that stood for 13 years when he fired a six-under-par 66 in the opening round on the Jack Nicklaus signature course.

He backed that up with a two-under 70 to win the title that has eluded him for the last three years.

“It’s an amazing feeling to be back in the winner’s circle,” Van Wyk said. “For the last three years, I’ve led this tournament in the first round and threw it away on the last day. I told myself not this time; not after last week’s disappointment.”

The 18-year-old Fancourt golfer shared the lead with Christiaan Maas going into the final round of the Dimension Data Junior Open at his home course last Tuesday.

He faded just slightly after a double bogey at the third, but kept pace with the Gauteng junior on the Montague course. However, a trio of bogeys over the last four holes put paid to his chances of overhauling Maas for victory.

A share of third was scant reward for the quality golf Van Wyk produced.

“It stung a little bit, but I let it go because I love St Francis Links. I’ve always played well here and I knew if I made a good start, I’d have another chance. That kept me motivated. And the putter was hot on the first day,” he said.

Birdies at the second and third, and another brace at the fifth and sixth holes pushed Van Wyk into pole position and he never relinquished the lead. He added two more birdies at 12 and 13 and offset a lone bogey at 14 with a birdie at the par three 17th for 66.

“I struck the ball really well and I hit almost every fairway and green. I put myself in good positions to go for the right side of the greens and the putter did the rest,” he said.

Another blistering start in the final round kept the George teenager in front.

“I hit it close on the first, lipped out for eagle at the par five third and hit a 6-iron to three foot at the short fourth to go three-under in the first four holes,” Van Wyk said. “Unfortunately I hit a bit of a rough spot before the turn. I hit a 4-iron in and was in an awkward spot and couldn’t up-and-down for par at the eighth. On the ninth, I expected my second shot to fade. It stayed straight, went into the hazard and I ended up making double.”

He gained back two shots with birdies at 12 and 13, but dropped another at the par five (16) after a wayward drive. He reached the final hole with a one-shot lead and was almost in trouble after a poor tee-shot, but the Fancourt golfer saved the day with a brilliant approach. He hit a perfect 9-iron to three feet and calmly boxed the putt to seal a two-shot victory on eight-under 146.

The triumph gave Van Wyk an injection of confidence.

“I am really stoked about this win. This was my last official tournament in South Africa and it’s a great feeling to leave for the United States with two big wins under the belt,” said Van Wyk, who is taking up a golf scholarship at Augusta University in George in August.

“The Nomads events always draws the best junior golfers and to win against the best is pretty awesome. It’s been a great season so far, and I’ll take a lot of confidence to the United States.”

A runner-up finish also bodes well for Casey Jarvis from Ekurhuleni, who takes up his title defence in the Nomads SA Boys Under-17 Championship at the same venue next week.

Jarvis helped the GolfRSA Junior Proteas to a record victory in the Toyota Junior Golf World Cup in Japan last Friday and, despite still recovering from mumps, immediately flew to the Eastern Province to get some game time on the challenging Jack Nicklaus layout.

Jarvis began the final round four shots behind Van Wyk after a first round 70 and the 15-year-old State Mines golfer still trailed the leader by a few shots through 10 holes.

He turned up the heat on the back nine and racked up a pair of birdies and an eagle at the par five 16th for a 68 to take second on six-under.

Fellow GolfRSA National Squad members Cole Stevens and Jordan Duminy finished third and fourth respectively. Stevens from Gauteng carded rounds of 71 and 67 to finish on five-under, while SA Amateur finalist Duminy returned rounds of 67 and 73 for a four-under aggregate.