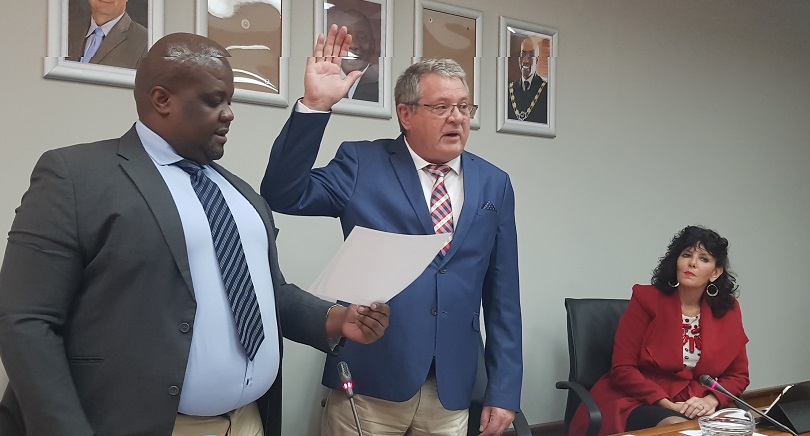 The Garden Route District Municipality (GRDM) is delighted to announce that the Acting Speaker, Cllr Barend (Barnie) Groenewald was unanimously elected as the new Speaker during a Council meeting held on 27 June 2019.

The position became vacant following the recent resignation of Cllr Eleanore Bouw-Spies as Speaker of Council and her inauguration as member of the National Assembly.

Cllr Barnie Groenewald previously acted in the position of Speaker before the appointment of Cllr Bouw-Spies and was once again re-elected as Acting Speaker during a Council meeting on 28 May 2019.

Cllr Ivan Mangaliso, spokesperson of the ANC, during the Council meeting, congratulated the newly elected Speaker on his appointment and emphasised that his party regards Groenewald fit for the position and believe that he will bring and keep the ‘house’ in order.

GRDM Executive Mayor, Cllr Memory Booysen, referred to the occurrence where both sides of the house nominated and agreed in placing their trust in Cllr Groenewald, as an unusual event. “Our side of the ‘house’ welcome you as the new Speaker; we acknowledge your competence and the manner in which you have managed the house in the past. We believe that you will take us to higher levels,” Mayor Booysen said.

The leader of the PBI (Plaaslike Besorgde Inwoners), Cllr Virgil Gericke, commented by congratulating Cllr Groenewald and advised him to “always act just and fair, and try to look for the right thing to do”.

During his first address, Speaker Groenewald said: “I would like to thank you for the opportunity. I will serve my Councillors diligently and continue to stay humble. My objective is to make you all happy councillors, to remove your frustrations and assist you where I can,” Speaker Groenewald added.

He concluded by saying that he will always allow his Christian principles and the following words to guide him in performing his work: “In everything you think, say or do, ask yourself – is this true, is it fair for concern, will it build better friendships and understanding, and lastly, will it be of benefit to all”.