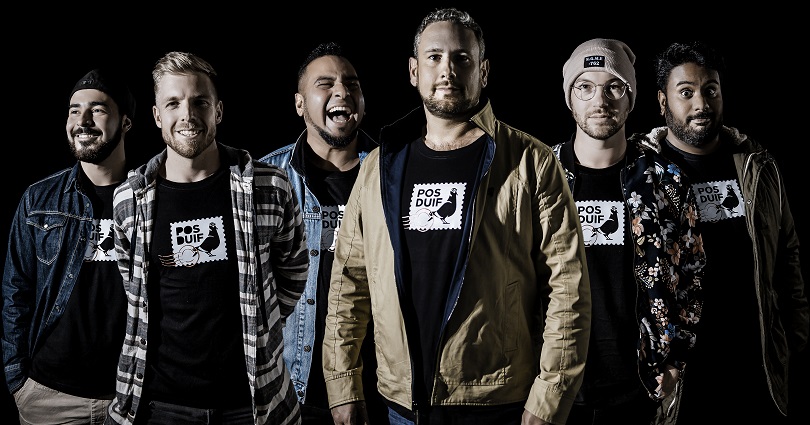 An Afrikaner, an Indian, a Lebanese, a Coloured guy and two English blokes walk into a pub… What might sound like the start of a good old-fashioned joke, is actually a description of a modern multicultural music collaboration with a rather odd moniker.

The exciting music group, POSDUIF, has just released their second highly anticipated music video of their current hit, EEN VIR MY, and like its predecessor it is already spreading through social media like wildfire!

Formed in 2018, POSDUIF is a brand-new Afrikaans band that made its bow earlier this year with the single Brandy Special, which has already racked up 300 000 views. With their second single, EEN VIR MY, currently charting on radio stations across the country, the band agreed that it was time to share another music video with the country.

The song, described by the band as Afrikaans pop with a touch of brass, is about finding love that’s worth fighting for. “It’s about finding that one person; from the first moment you lay eyes on someone, to visualising what your life could potentially be like with them by your side, to eventually having them next to you,” says lead vocalist, James Boland.

Written by Nick Jordaan (guitarist and vocalist) and James Boland, the song came about quite by chance. “One night we were all at James’s house and decided that we should try writing an Afrikaans song. We stayed up until three in the morning writing, and EEN VIR MY was born,” says Jordaan.

While the idea behind the music video is simple, it perfectly captures the essence of the message the band is trying to convey.

“The idea was to introduce the band members and, at the same time, to create a sense of love between two people – in this case two dancers. We colour-graded the video beautifully and kept the shots tight to create a sense of intimacy,” explains Boland. “The message is ultimately that love is like learning how to dance. It takes the initial meeting, followed by a lot of rehearsal, until eventually it flows between the people involved and becomes a part of them.”

To bring their vision for the video to life, the band collaborated with talented choreographer Ryan Hignett and dancers Kaylan Sabbadin and Bradley Hartmann. One of South Africa’s most talented cinematographers, Kyle White, brought everything together. “Kyle has been a long-time friend and supporter of the band, and it was a privilege to work with him,” says Boland.

In the age of email, smartphones and other technology, one has to ask why POSDUIF? Nick says the band’s name was a suggestion from a friend. “When we were thinking of what to call the band, a friend suggested POSDUIF and we loved it! It’s perfect because we want messages to be delivered via our music.”

If the group seems familiar, it’s because it consists of members of the popular band RUBBER DUC –Jordaan, Amiel Gopal, Sheldon Sham, Leeroy Sauls and Brendan Campbell. However, with the addition of Boland as lead vocalist and a shift in focus to Afrikaans, POSDUIF was born.

“We are a six-piece band with influences that range from Gospel and pop to Jazz, all uniquely combined to capture the sound of POSDUIF. We want to take people on a musical experience, from lyrics and melody right through to the arrangements,” explains Boland. “What makes it interesting is that we all have different tastes, ideas and come from different cultures. We are truly a multicultural music collaboration.”

However, despite their differences, the members of POSDUIF share a passion for music and a desire to showcase the positive side of life, particularly in South Africa.

While they have exciting plans for the future, the band is currently working on their first album. “We are spending a lot of time in studio, writing and recording and preparing our album. We are very excited about the sound and direction it’s taking,” says Boland. They are also working on creating a bigger and better live show and plans to shoot their next music video is already in the pipeline.

James Boland is POSDUIF’s lead vocalist and a guitarist. He loves family, friends, travel and culture, and wants people to be happy. “Music is a way of sharing stories with people, and with each song you share a piece of yourself,” he says. James believes in working hard, giving your best and never giving up.

Guitarist and vocalist, Nick Jordaan, is a Pretoria Boys High School old boy with a degree in marketing and advertising who loves a good dad joke. “Music is the vessel that carries such a wide array of emotions, and for me there is no better feeling than seeing somebody singing along to a song you wrote,” he says. If life had taken him on a different path, he would have loved to be a professional football player.

Brendon Campbell is the group’s producer and also plays lead guitar. He has been working in the industry for eight years. Asked about the highlight of working in the music industry, he says: “We are lucky enough to meet a lot of people, both within the industry, and out in the world. A massive highlight for me is the opportunity to experience such a wide and diverse range of people.”

Amiel Gopal plays bass and loves everything there is to love about music and the music industry. He has played guitar since he was eleven years old and has been involved in the industry since he was 18. Amiel believes that giving up is only an option for those who choose to live ordinary lives… “So, if you want an out of the ordinary life, never give up!”

Saxophonist Sheldon Sham sees music as his calling. “I knew as a child that this is what I wanted to pursue.” His motto for life is simple – consistency is everything. Sheldon’s secret superpower is that he is an animal whisperer.

Drummer Leeroy Sauls grew up in Cape Town and says that his biggest music influence has been in church. “It’s where I started playing drums at the age of ten. Making music has kept me on the right path and has saved me from making bad choices in my life many times.” He has been involved in the industry for 12 years. Leeroy lists his career highlight as working and traveling the world with the legend and mentor Hugh Masekela.

POSDUIF’s fresh and energetic sound is sure to have a wide appeal and, coupled with great lyrics and strong melodies, their music is sure to please fans of all ages and walks of life.