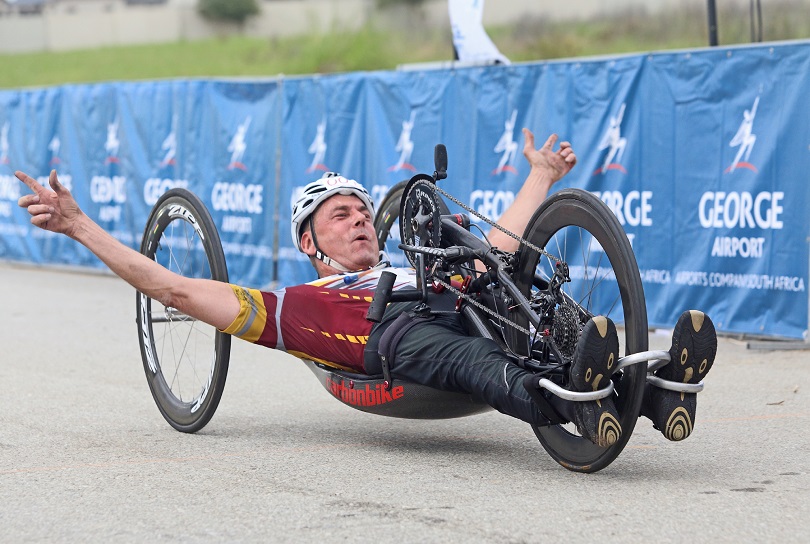 George, Garden Route – Stuart McCreadie broke his back in a motor vehicle accident in 1992.  Then only 24, he suffered a completely severed spinal cord at level T8 (8th Thoracic Spinal Vertebrae).  Undeterred Stuart, now 44, is leading a full life.

After the accident, he studied at the Cape Peninsula University of Technology (CPUT) and is currently the creative director at J Walter Thompson, an advertising agency in Cape Town.

Stuart has been active throughout his life, with swimming being his main source of fitness.

“In September 2007 I rode my first handcycle and was hooked. The outdoors, exercise, the speed, the ease of movement when compared to a wheelchair and the social nature of the sport, all colluded to fuel my addiction.”

Stuart has represented South Africa on numerous occasions.  He won a bronze medal at the 2014 UCI World Cup in Segovia, Spain and was placed 4’th at the UCI Para-cycling Road World Championships, which took place in Greenville, South Carolina (USA) later in the same year.

He competes in the H3 Category which includes athletes “with impairments corresponding to a complete lesion from T1 to T10.”  Athletes in this category compete on a hand cycle with a rigid frame in a recumbent position.

Stuart is a long-time supporter of the Outeniqua Cycle Challenge, winning the 42.2 km event in 2016 in a record time of 1:07:41.  In spite of windy conditions, he improved his time by almost two minutes on the previous year when he was beaten into third place by Ernst van Dyk.

Last year he shaved another 4 minutes off this time, winning the handcycle event in a time of 1:03:45.

In an interview with Guts2Glory in 2013, Stuart was asked what the strangest thing a spectator had said to him, to which he replied, “don’t fall asleep hey!”

Judging by the interview, a perfect day away from work and cycling would be lying on the couch under his feather duvet, eating chili pizza, drinking red wine and listening to Bob Marley.

“Don’t worry… about a thing… ‘cos every little thing’s… gonna be alright.”

The 17’Th OCC supported by the George Municipality, a wheelchair race which attracts athletes from all over the world, will take place in George on Saturday 14 September 2019 at Halfway Toyota George, who is the event host!

Athletes in racing wheelchairs, adapted bicycles, hand cycles, basketball chairs, and ordinary wheelchairs have made this into the premier sporting event for the disabled on the South African sporting calendar. It undoubtedly has the potential to develop into one of the best events of its kind in the world!

Apart from the George Municipality, Lancewood and the Department of Cultural Affairs & Sport is supporting the event.