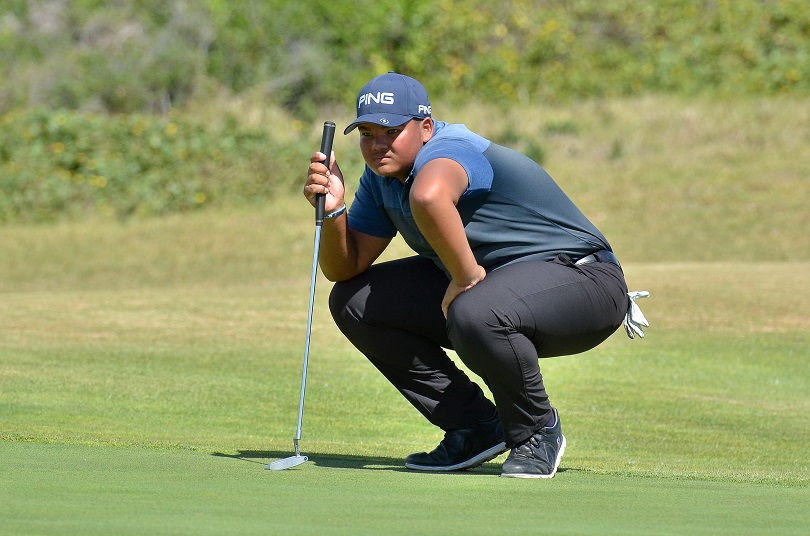 ST FRANCIS, 2 July 2019 – Southern Cape junior Jordan Duminy was the talk of the town in St Francis after he blitzed St Francis Links to take the first round lead in the Nomads SA Boys Under-17 Championship on Tuesday.

Just five days ago, Duminy finished fourth on the famed Jack Nicklaus signature course as Fancourt amateur Ben van Wyk matched the 13-year-old amateur record and recorded the lowest round by a junior with six-under 66 en route to victory in the Nomads National Order of Merit Coastal.

CEO Jeff Clause had just sent Van Wyk’s scorecard to be framed when Duminy threw a spanner in the works with a sublime seven-under-par 65.

The GolfRSA National Squad member not only set a new amateur course record, but a new junior record took him straight to the top of the leaderboard.

Duminy made four birdies in his outward loop and voided bogeys at nine and 11 with a further brace of gains at 12 and 13. A trio of birdies from the 15th will see him start the second round with a comfy three-shot cushion.

During the recent GolfRSA National Squad Tour, Duminy tied for 14th in the East of Ireland Open Amateur at County Louth. He missed the cut in the St Andrews Links Trophy, but one of three South Africans to reach the match play stage in The Amateur Championship at Portmarnock.

Competing on top links courses and game time in the curtain-raiser before the national championship certainly paid dividends for Duminy at the well-bunkered links layout.

“I made a really good start with three solid pars and then the putts started to drop,” said the Louis Oosthuizen Junior Golf Academy member.

“I birdied four and made three in a row from six, but I pulled a grip-down 5-iron straight at the top of the hill on the ninth and I missed a 10-footer for par. At 11, I hit it 25 feet and three putted, so that wasn’t pretty, but I made up for it with birdies at 12 and 13.

“The tee on the 12th was moved up and I had 257 metres to fly the bunker. I cleared it on the left, but left myself with a chip on the downslope. It came out well and I holed a seven-footer for birdie. At 13, I hit it on the right edge of the green and made an up-and-down birdie.”

Duminy’s ball striking was on point and he went on another birdie splurge.

“On the 17th there is a big slope that feeds down to the hole. I pitched a 7-iron at 170 metres and let it roll down to 15 feet and boxed the putt for birdie.

“I’m happy that I’m in a good position so early in the championship, but we have three rounds to go and if I learned anything on the UK Tour it’s that anything can happen can happen at a links course, especially if the wind gets up.”

Van Wyk’s younger brother CJ got himself into contention with an eagle at the par five 12th and half a dozen birdies, but the Fancourt junior had four dropped shots and finished sole second on four-under.