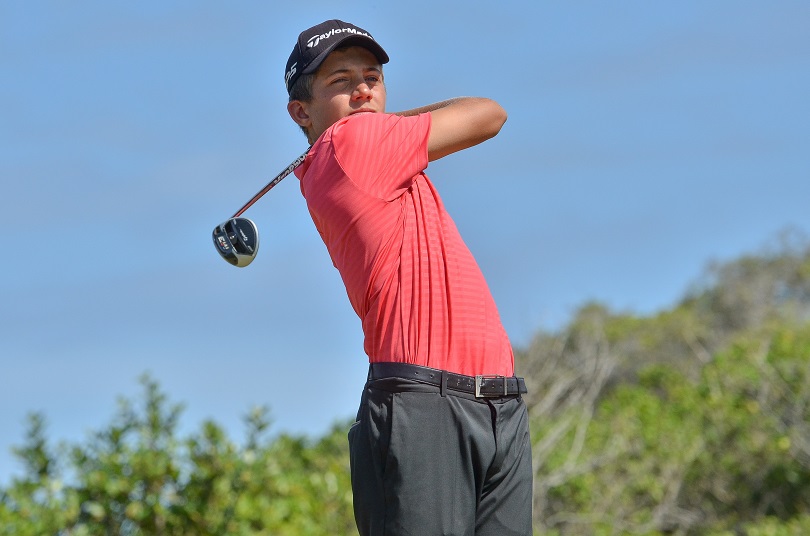 On a day when the morning breeze became an afternoon gale, only two players manage to finish in red numbers, but Duminy, who took the first round lead with a new amateur record seven-under-par 65, was not one of them.

The GolfRSA National Squad member carded a solid even-par 72 at the Jack Nicklaus signature course to remain in pole position on seven-under.

The low round honours belonged to Maas, whose three-under 69 boosted the Pretoria Country Club golfer to second. He sits five shots off the pace, while a 71 from Kayle Wykes will see the 15-year-old from CMR Golf Club start the final round in fourth on three-over.

CJ van Wyk  dropped four shots in his last five holes and a battling 75 left the Fancourt junior wedged between Maas and Wykes on one-over.

Duminy honed his game in the windy conditions on the Southern Cape coast and, not surprisingly it was plain sailing as the Louis Oosthuizen Junior Golf Academy golfer came down the stretch with six straight pars when the wind was at its worst.

However, Maas put on quite a show, too.

Coming off his first national victory in the Dimension Data Junior Open at Fancourt, followed by a top seven finish in the Nomads National Order of Merit Coastal at St Francis Links last Friday, Maas overturned a double bogey at the second with five birdies.
“I managed to save par at the first hole after a poor tee shot, but my drive on the second ran through the fairway into the bush and I had to take an unplayable,” said the 15-year-old.

“I hit my second just right of the green, made a poor chip and two-putted for the double. But after that I played really well. I birdied three of the four par fives, which always helps, and picked up my other birdies at five and 11.

“I hit a lot of good shots, but I did leave a few birdies out there. The highlight of my round was my par at the ninth. I had 220 straight into the wind, and I 2-iron to 10 foot but that was one of the birdie putts that stayed out.”
With one round left, is the five shot deficit too much to overcome?

“I’ll have to go really low to catch Jordan, but I’ve got nothing to lose,” said Maas. “I’m just going to go out there and give it my best shot. I’d really want to make the team that’s playing in the Italian Under-16 Championship later this year, so hopefully a few more putts drop and I post another good result to stay at number two in the Juniors Under-17 Ranking.”