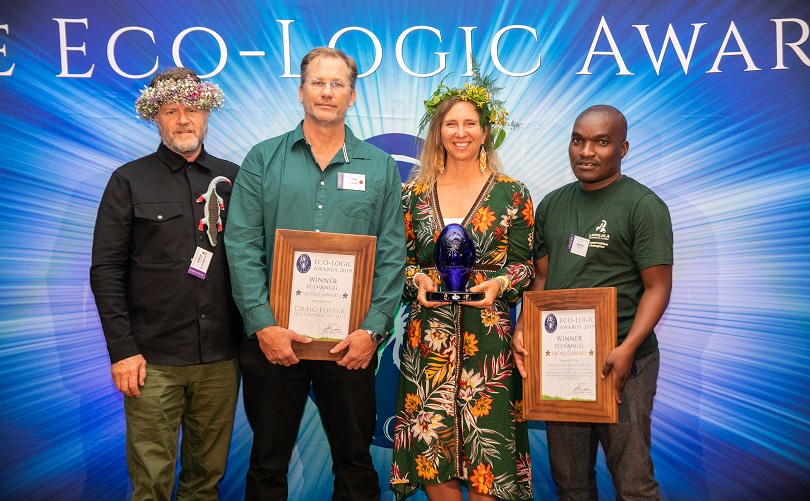 As part of its aim to drive ‘green consciousness’ among consumers at large and integrate a ‘green agenda’ into the future of residential property, Pam Golding Properties once again sponsored the Eco-Angel Award at the Eco-Logic Awards 2019.

Established by Enviropaedia in 2011, these awards invite South African individuals and organisations to submit their ecological products, services, projects or initiatives under 13 environmental categories to be evaluated by a panel of highly respected and environmentally aware judges.

Says Anthony Stroebel, Pam Golding Properties head of strategy and a director of the Green Building Council of South Africa: “This is an annual celebration of the visionaries and innovators or ‘eco-heroes’ who are not only actively promoting a more sustainable world but who are also finding solutions to the earth’s most pressing environmental challenges. The Eco-Angel award is presented to an individual whose actions have conserved, nurtured or restored the earth’s life forms, eco-systems or natural resources.”

This year’s Eco-Angel Award winner was Rhian Berning of Plettenberg Bay, founder and pioneer of the Eco Atlas blog, who describes herself as an environmental activist, writer, speaker and ecopreneur and who has devoted her life to strategically planning towards and implementing sustainable change. After losing her family home in the devastating Garden Route fires of 2017, and building a new, off-the-grid home, Berning is a true Eco-Angel helping enable a groundswell movement of positive change.

Eco Atlas is a unique online platform which empowers active citizens to vote with their wallets for a better world for people and planet, while Berning also initiated Renew Able Plett, a localised campaign running Eco Brick projects with thousands of children at schools and incentivising businesses and the public to drop single-use plastics, support local suppliers and reduce their waste to landfill.

After studying Environmental Science, Berning got the Schools Environmental and Educational Development (SEED) organisation off the ground with its first funding from the Shuttleworth Foundation and project-managed SEED on the Cape Flats, nurturing food growing at schools and empowering teachers with the tools and skills to use food gardens as a teaching resource.

She then went on to found the Nature Network, fostering a sense of wonder and interconnection with nature for hundreds of children across the schools of Cape Town. She was invited to become the Regional Coordinator for the international Eco Schools programme supporting environmental education and outcomes at schools across the Western Cape.

The Eco-Angel award was strongly contested by close runner-up Craig Foster of the Sea Change Project, who has spent over 30 years making national and international award-winning films on wildlife and films of great anthropological significance. In the past eight years, he has spent hours every day in the kelp forests of False Bay, free diving and functioning as a citizen scientist, contributing to the knowledge and discoveries of species in the kelp forest. He has been mentored in this process by Professor Emeritus Charles Griffiths, a master marine biologist and scientist.

Foster has discovered over eight new species and 40 new behaviours, and even had a newly discovered species of shrimp named after him – Heteromysis Fosteri. He recently co–authored an impressive coffee table book called Sea Change – Primal Joy and the Art of Underwater Tracking. This is the first of its kind that showcases the wonders of the kelp forest while simultaneously speaking to the deep inspiration and change that nature immersion creates within a person.

His prolonged exposure to the wonders of the kelp forest ecosystem and the cold has redefined the way that naturalists explore the ocean. His way of being in the water without a wetsuit or any diving gear, makes him at one with the ecosystem – not as a visitor but rather as a member of the forest with its incredibly diverse and beautiful variety of species. Foster’s gentle and non-invasive approach has opened up the sea forests to him in a way few people have experienced and enabled him to discover and uncover many wonderful and previously unknown secrets of the sea. His work has been showcased in BBC Blue Planet 2 and will shortly be in film form for wider release. He has co-created the Sea Change project, a not-for-profit trust, which is a collection of like-minded individuals comprising explorers, free divers and storytellers who have all come together to conserve our unique and wonderful Great African Sea Forest.

Third was Mashudu Makhokha, director of Lapalala Wilderness School, who has built up a well-deserved reputation for developing and running a centre of excellence in the field of environmental education at the school. He manages a team of educators who have inspired young people to discover the value of biodiversity in our natural world. Makhokha is a leader who embraces the key inspirational characteristics of passion and enthusiasm in all he does, galvanizing his staff to become outstanding teachers, and encouraging them to identify and nurture Africa’s future conservation champions through the school’s Youth Development Programme. Many who come to the school have recognised their time there as being a life-changing experience, both by encouraging them to consider a career in environmental conservation and by stimulating them to promote biodiversity conservation as a key requirement for a sustainable society.

For further information contact Pam Golding Properties on 021 7101700 or email headoffice@pamgolding.co.za or to enter the 2020 Eco-Logic Awards go to www.eco-logicawards.com.