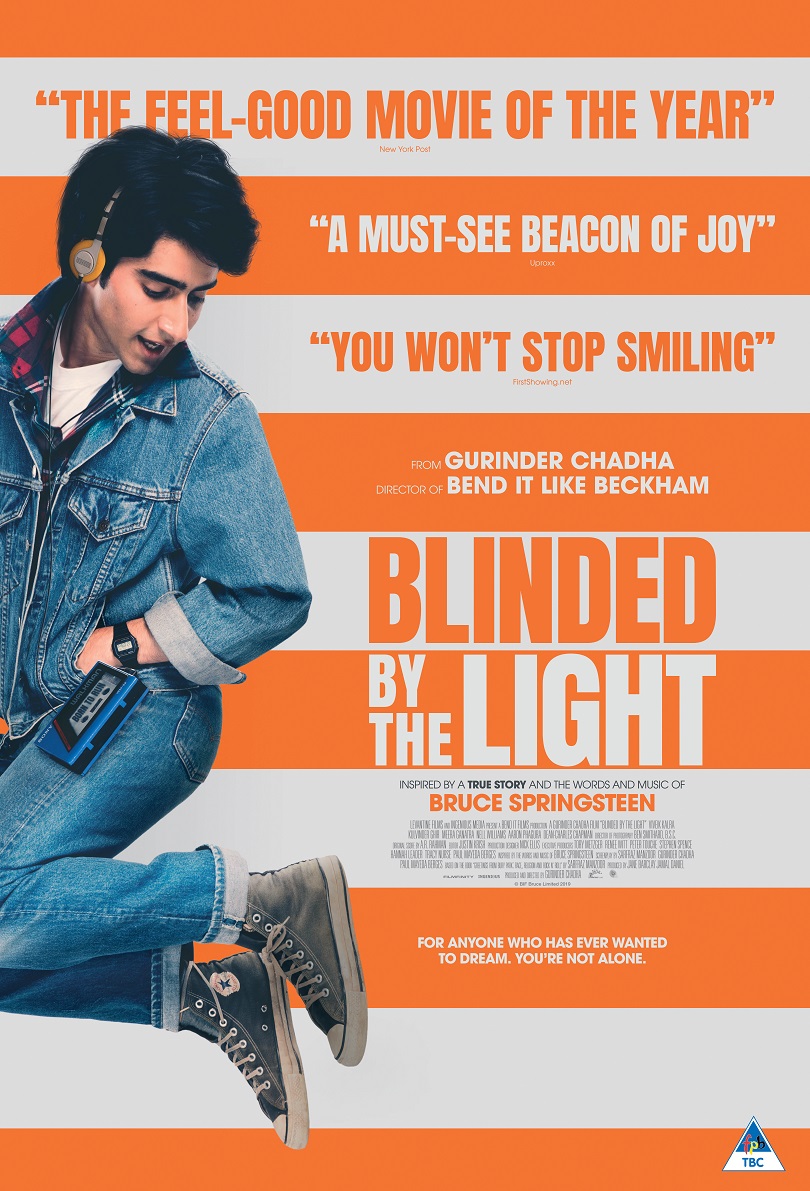 Everyone has that one song, album, movie or book that came along at the perfect time in their life – just when everything felt like it was falling apart, an incredible piece of art came along and made everything seem like it might be all right.

BLINDED BY THE LIGHT tells the story of Javed (Viveik Kalra), a Pakistani British teenager living in a drab London suburb in 1987, who experiences exactly that. He discovers the music of Bruce Springsteen, which jolts him alive and becomes his fixation, his obsession and identity. But the music does more than that.

Inspired by the life of British journalist Sarfraz Manzoor, who co-wrote the script, the film focuses on the teen, who is struggling to find a balance between his life in and outside of the home, with expectations from his Pakistani father conflicting with how he sees his own life.

Javed’s world is turned upside down after a chance encounter with rebellious classmate Roops (a scene-stealing Aaron Phagura), who introduces his new friend to the thumping music of Bruce Springsteen; the artist might no longer be seen as cool by Javed’s peers, but the lyrics inspire him to take control of his destiny.

BLINDED BY THE LIGHT is a coming-of-age tale directed by Gurinder Chadha, who in 2002 made the terrific Bend It Like Beckham. The film, which is both a charming ode to teenage dreams and a loving tribute to The Boss, marks an exuberant return to form for the director, who explains the essence of the movie: “It’s about a young man’s dreams, and how he is inspired by someone from a totally different cultural background writing about their own life thousands of miles away in New Jersey.”

Javed’s home life is one we’ve encountered a million times: Parents who expect their children to ignore the culture they’ve brought them to and honour the values of the land they left. Playing the stern father, Malik, Kulvinder Ghir has a thankless job. He has devoted his entire life to eking out a better future for his children. A proud and traditional patriarch, he refuses to let his son grow up to be a taxi driver, but he also lives in denial about Javed’s burning desire to become his own man. Ghir’s performance is heartfelt and hilarious.

Meanwhile, as Javed, Kalra’s wide-eyed expressiveness and unexpected layers of emotional vulnerability lends a great deal to the film. He seems to be having the time of his life in this role.

The rest of the cast include Javed’s family and friends. His mother Noor (Meera Ganatra) is a beacon of patience, while his older sister Shazia (Nikita Mehta) is the similarly-Anglicised sibling who gives the teen some much-needed perspective about how to look out for his own.

Supporting actors include Hayley Atwell as a well-meaning English teacher who helps set the stage for Javed’s inspiration to grow; Nell Williams as Eliza, the girl who catches his eye; and his New Wave wannabe best friend Matt (Dean-Charles Chapman).

BLINDED BY THE LIGHT is more than a celebration of Springsteen. Overwhelmed by skinhead racism on the street and the constraints placed on Javed by his constantly striving father, it is a bracing movie about growing up. It takes you to that place where music can be everything: the promise of a life you don’t have yet, but which the music says you can get.

Springsteen’s music does exactly that for Javed. It’s like this strange white man from New Jersey is singing directly to the Pakistani teen, like he’s describing every beat of his life, and charting Javed a course to his own promised land. The lyrics erupt so intensely in Javed’s brain that the words spill out into the real world and splash around the screen. Javed’s experiences with Springsteen’s music are so inexorably woven into the fabric of adolescence that it’s almost impossible not to relate to the teenage impulse to shout the lyrics of your favourite musicians from the rooftops.

As Chadha demonstrated with Bend It Like Beckham, she knows how to effortlessly thread the stresses of clashing cultures with bright, accessible comedy.

“With all of my films, I want to show how similar we are to people that we thought were different to us. I want audiences to feel a human connection to my characters and to leave feeling that the world is not only an unequal place full of problems, but also a joyous world where there is always the possibility of transcendence. And I want audiences to fully appreciate what an incredible man, writer, and musician Bruce Springsteen is – he deserves it!”

BLINDED BY THE LIGHT is a crowd-pleasing, heartfelt and emotionally gripping joyride about the ways in which music can change our lives – especially during the advent of adolescence.

The film is distributed by Filmfinity (Pty) Ltd. and will be released nationwide on 16 August 2019.