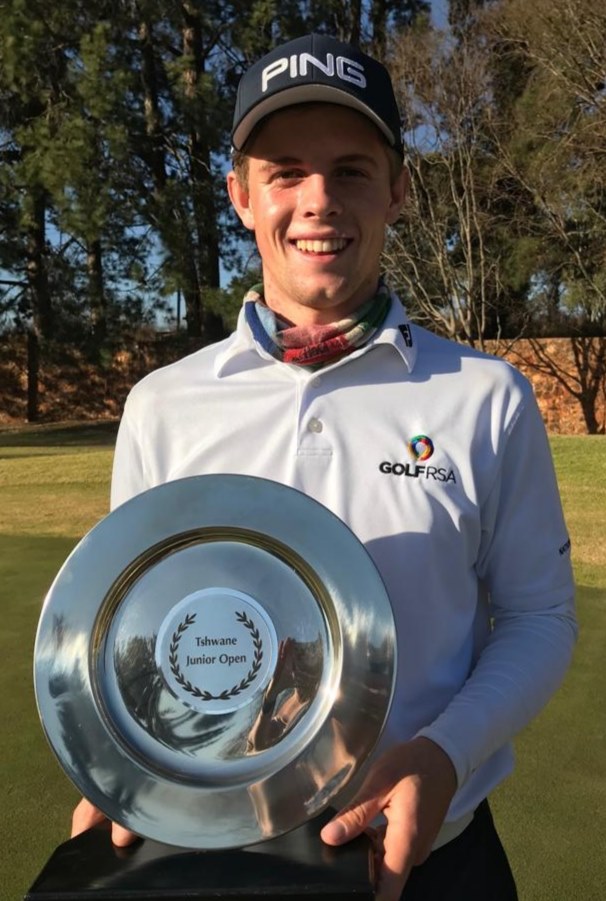 PRETORIA, 8 July 2019 – Martin Vorster sealed the Tshwane Junior Open title in stunning fashion after an eagle at the par five 17th gave him the chance to defeat Ayden Senger from Western Province in a sudden-death play-off.

Senger set the first round pace on Sunday with a blistering eight-under-par 64 and the Southern Cape junior trailed by four shots going into Monday’s final round at Irene Country Club.

Senger made a stumbling start, though. He stemmed the bleeding with a trio of birdies around the turn and birdied the par five 17th, but by the time he signed for an even-par 72, the Durbanville junior had been caught by Vorster.

Tied on eight-under 136, the pair had to make two trips down the 18th hole before Vorster clinched victory with a birdie.

“I’m really chuffed with my first under-19 win of the season,” said GolfRSA National Squad member Vorster, who also led the GolfRSA Junior Proteas to a record-setting victory in the Toyota Junior Golf World Cup in Japan last month.

“It was all down to that eagle coming at exactly the right time. The tee was moved forward and I hit a really good tee shot down the middle. I had 156 metres to the back-right flag and it was playing downwind, so I hit a pitching-wedge in. It landed six metres left of pin and I made the putt.”

Vorster and Senger both hit their tee-shot shots left of the bunker, and short of the green.

“I really thought Ayden had it at the first play-off hole. I chipped it to two metres and Ayden’s chip finished a metre from the hole. I made the par putt and I’d already taken off my cap to congratulate him when his putt horse-shoed straight back at him,” explained Vorster.

“On the second trip, Ayden hit his tee-shot in the same spot on the left and mine finished in the greenside bunker on the right. His chip ran about seven metres past the pin and I chipped it to a metre. After he missed, I boxed for the birdie and the win.”

It was the second successive victory for the Louis Oosthuizen Junior Golf Academy, after stable-mate Jordan Duminy claimed a runaway seven-shot victory in the Nomads SA Boys Under-17 Championship at St Francis Links last week and Vorster was stoked to add to his East of Ireland Amateur Open win in June.

“I’ve been travelling a lot and I missed out on some of the junior events, so it’s pretty great to get the first one under the belt,” he said.

“I have been working really hard to try to get a win. Sometimes I felt that I have made mistakes and I end up not winning. Other times, I felt I’ve given a good charge, but other people got the win. Today, I felt I played some of the best golf of the season and I really went for it on the play-off. So I’m extremely pleased that today everything worked out my way.

Fellow GolfRSA Junior Protea Casey Jarvis finished in second on seven-under and Duminy rounded out the top three on four-under.