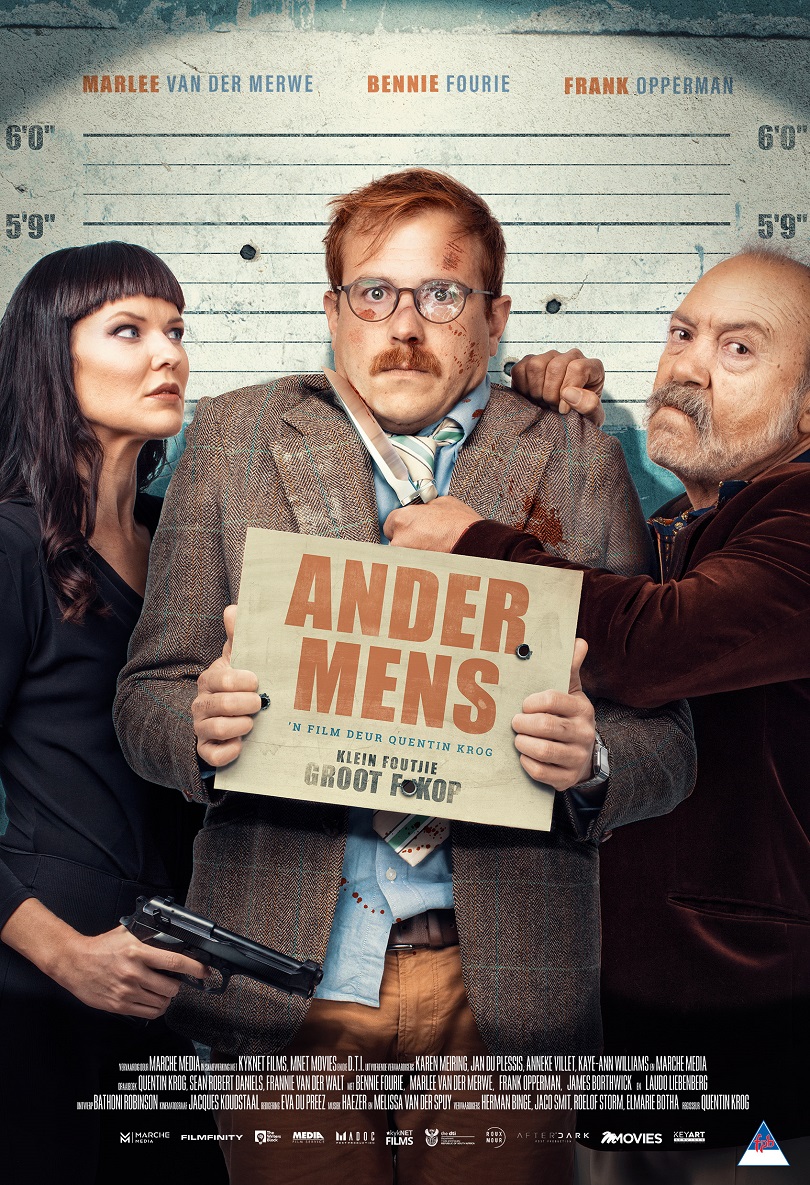 One lesson life loves to teach us, is that things are not always as simple as they appear – a fact that is confirmed by director Quentin Krog’s (Ballade vir ’n Enkeling, Vir die Voëls) brand new film ANDER MENS, which, like its main character, can’t be judged according to a standard formula.

The movie is presented from the perspective of Lieutenant Erica Kruger of the witness protection programme in the Cape, and is inspired by the top-selling novel by award-winning author Zirk van den Berg, which received the kykNET-Rapport award in the film category in 2014.

“While the basic storyline is the same, the film differs drastically from the book,” reveals Krog about the screenplay adaptation, which he undertook with the help of Sean Robert Daniels, Herman Binge and Frannie van der Walt. “The events and background stories of the characters have been adapted to better suit the format and duration of the film.”

With an abundance of action and dark humour to keep audiences on the edge of their seats, ANDER MENS tells the thrilling story of an ordinary, rather boring bookkeeper, Daniël Niemand, whose life is irrevocably changed after a series of misunderstandings turns his world upside down. While the chaos leads to tragedy, it also helps him achieve a great personal victory.

“The film brings a fresh new genre to the local big screen arena. It is an action picture that combines serious situations with humour. It is also not often that you get to see Frank Opperman in such a badass role and although things get a bit rough as the story progresses, it also makes you laugh. Definitely a movie that everyone should go and see,” says lead-actor Bennie Fourie (Vuil Wasgoed, Mooirivier, Hotel).

Most of the action-packed events take place in the picturesque, mountainous Du Toitskloof area in the Cape. The film shifts local boundaries in terms of style and genre, and the same type of camera lens used for the 1970s hit The Godfather was used to great effect in this modern action-thriller.

Bennie is brilliant in the role of the nerdish Daniël, who has been bullied by those around him his entire life. However, his bland existence quickly turns into a nightmare when a confrontation with his marriage counsellor (Tim Theron) goes awry and his dubious employer and crime boss, Frank Redelinghuys (Frank Opperman), helps him clean up the mess.

When a new piece of evidence provides Frank’s arch nemesis, policeman Johannes Ackermann (James Borthwick), with the perfect opportunity to finally capture this criminal and his brother Hansie (André Weideman), Daniël is unknowingly used as bait. He is placed under the surveillance of Erica Kruger (Marlee van der Merwe), who harbours a few dark secrets of her own.

About the character he plays, Bennie reveals: “Daniël is a guy with the worst luck and everything in his life seems to go wrong. To give life to this unhappy man, I gained 16 kg. The transformation helped me to literally put myself in his shoes, because I did not feel like myself anymore. My movements became restricted and I got tired very quickly too.”

Several other stars, including Jana Cilliers, Lika Berning, Clyde Berning, Neels van Jaarsveld, Laudo Liebenberg, among others, can be seen in the film.

According to the director, the actors chosen for the movie were envisioned long before the script was completed. “We had a very clear picture who would be perfect for each part from the get-go, and all we had to do was to phone them with an offer.”

To make her character more credible, Marlee (Getroud met Rugby) had to work with a stunt choreographer to accurately convey her intense fight scenes.

“I was eight months pregnant when Quentin Krog told me about the role. It was a huge but enjoyable challenge to get rid of the baby weight and to transform myself into an assassin with above-average physical abilities. I also enjoyed the idea of playing a character that is different to what I’m used to,” says Marlee about preparing for her role. “It was quite an experience being in the company of legends such as Frank Opperman, James Borthwick and Jana Cilliers. And to work with Bennie Fourie – what fun! It was so difficult at times to not laugh at him in some of the scenes. His improvisation is very sharp.”

However, this doesn’t mean that the director wasn’t open to creative suggestions – he divulges that several scenes were spontaneously adapted at the last minute due to the interesting interpretation thereof by the actors.

“When you get the opportunity to work with Quentin Krog, you take it. Aside from the fact that he is a wonderful human being and director, with great passion for what he does, he also has an amazing eye for detail and is meticulous in his planning,” Bennie says. “Another great thing about him, is that when he casts you in a role, he gives you the freedom to make decisions about your character and add your own flavour to the script, which is something that I truly appreciated.”

While viewers will undoubtedly be confronted by various stereotypes in between the blood and consternation, they will soon realise that ANDER MENS exposes several deeper themes such as bullying, self-image, respect, relationships, family ties, violence and crime; it shows that even the most hardened personality can sometimes be vulnerable, and that even a Nobody can develop into a Somebody who stands up for himself.

The film promises to leave the audience roaring with laughter with its quick-witted dialogue and dark humour, while also keeping them gripped as the nail-biting events unfold and they realise that it is every person’s responsibility to determine their own identity in life.

“It’s the type of film that people can get lost in, laugh at and get thrilled by all at the same time. But it also contains the important message that the world crushes those who don’t embrace the opportunity to adapt and that you should not wait for your life to fall apart before you do something to better it,” Krog concludes.

ANDER MENS was produced by Marche Media (Die Seemeeu, Kanarie) in collaboration with kykNET Films, M-Net Movies and the Department of Trade and Industry (DTI) and is distributed by Filmfinity (Pty) Ltd. It will be released in local cinemas on 23 August 2019.