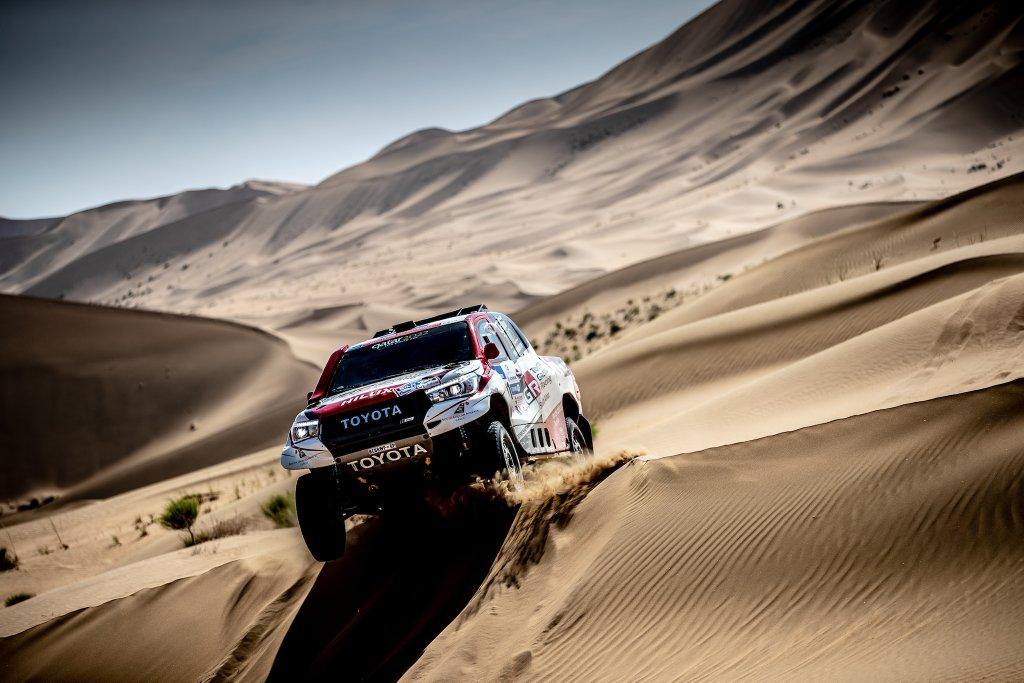 Brian Joss – ALASHAN, CHINA – Toyota Gazoo Racing SA’s Nasser Al Attiyah (Qatar) and navigator Mathieu Baumel (France) are on the brink of a historic victory, after winning the penultimate stage of the 2019 Silk Way Rally, between Bayinbaolige and Alashan in China.

The pair posted a time of 3hrs 52min 17sec over the 290km-long special stage, increasing their lead to 1hrs 10min 46sec over China’s Wei Han, in a Geely SMG Buggy.

“It was a good stage for us, despite opening the road,” said Al Attiyah after parking his South African-built Toyota Hilux safely in the bivouac after the stage. “Most of the stage consisted of sand, which suits my driving style – and it clearly suits the Hilux too.”

With that said, the Toyota Hilux crew spent nearly 140km of Stage 9 in second and third gear, dealing with short, sharp dunes that really punished the crew and the car. As ever, the Toyota Hilux again proved its legendary toughness by coming through unscathed; and the crew reckons a good night’s rest should put them right for the final stage.

Should Al Attiyah and Baumel win the 2019 Silk Way Rally, it will be the first time that a crew wins both the Dakar Rally and the Silk Way Rally in the same year. But the ever-pragmatic Glyn Hall, Team Principal of Toyota Gazoo Racing SA, is quick to caution: “We don’t like taking anything for granted in this sport. And Nasser is a true professional. He’ll tackle tomorrow’s final stage like any other, and only relax once he’s safely through.”

Cross-Country racing can indeed be cruel, as we saw with Bernhard ten Brink at the Dakar Rally this year. A great performance, brought to a halt when the end was almost in sight. Then again, Al Attiyah’s performance in the 2019 Silk Way Rally has been nothing short of perfect.

“Nasser has really shown his class so far, and we certainly don’t doubt that he can win the rally,” conceded Hall. “But let’s just wait for the final stage before getting excited.”

The rally is scheduled to end with a bang – the final stage has a race distance of 255km, plus liaisons of 301km. Most of the stage will be run over gravel tracks, with some dunes and rocky river crossings also in the mix.

“We’ll be opening the road again tomorrow,” said Al Attiyah of the final stage. “But Mathieu has been brilliant with the navigation so far, and unless something disastrous happens, I’m confident that we’ll be able to bring it home on Stage 10.”

The final stage will bring the rally to the Chinese city of Jiayuguan, before the crews transit to the city of Dunhuang for the podium finish – completing a mammoth event of 5,000 km, which spanned three countries.